Looking to solve an issue I’ve had with Qobuz and the Naim App the last few months. Qobuz has become painfully slow, I select the album I want to hear and it can take 15-20 seconds for the track listings to appear. Force quitting the App does not help, when I replaced my iPad recently the response time improved briefly only to slow down again.

How many Qobuz favorites do you have?

I have exactly same issue

Ok that’s a small number and very odd. I asked because in the past the Naim app was close to unusable on Android with ~2000 Qobuz favorite albums, but that became better with app updates over the past 6 months or so. But obviously most likely unrelated to the issue you are now seeing

This may be obvious but on your ipad if you double click the large start button just below the screen……all open apps appear. If you have a large number open, just swipe them up and away to close……is it now faster on Qobuz.

This iPad is dedicated to the hi-fi. No other Apps are running.

Has anything changed on your network?..
Would be useful to know which Naim product(s) you’re using, and whether they’re hard-wired or wireless.

I’d suggest logging out of Qobuz via the Naim App and back in again, in case there’s an issue there.

After that, we get into full system reboots…

I’d suggest a power cycle of the ND555. Restarting your router while the ND555 is having its downtime would be a good move, too, to rule that out.

Power cycled the ND555 and EE switch. Force quit the Naim App and now tracks are loading instantly. Things must get clogged up…I’ll know what to do next time I see this issue.

Thanks @Naim.Marketing for the “live” tech support.

Thanks for the tip, I had a lot of apps open and swiped them away. I will see if the search response does improve.

Can’t hurt to try, but actually iOS is quite smart in managing resource consumption of background apps. If an app wakes itself up too often in the background, it drains battery but should not have much performance impact unless the app is very misbehaving. If an app does too many wakeups, you can take away its “background refresh” rights.

No, Closing Background Apps on Your iPhone or iPad Won’t Make It Faster

Despite what you may have heard, closing apps on your iPhone or iPad won’t speed it up. But iOS does allow apps to run in the background sometimes, and you can manage that in a different way.

Here’s a strange one I discovered today in Qobuz, I’ve never purchased an album from Qobuz. 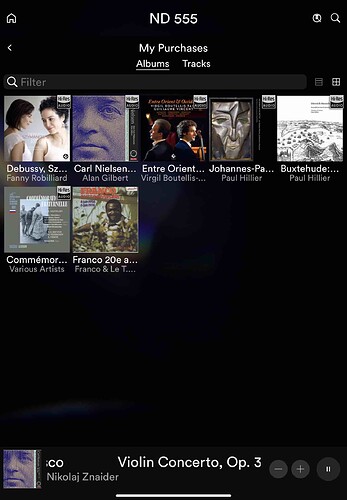 Chris, from the covers these look like the freebie albums on offer last year from Qobuz…