Townsend Podiums, and a few Facts

Hi Folks. I received my Facts back from PMC HQ yesterday via their delightful rep. Tom Barron after a repair ( replacement of both mid domes). In preparation I had installed 2 Townsend Podiums size 2 in the exact position they were at before. Once you get over their intrusive looks and the fact that the speakers wobble when pushed, like an old barge on the open sea they were a revelation from the first few notes. I know I’m listening through a pair of fresh factory domes, which I’ve now put probably 10 hours of loud music through. The difference remains unsurprisingly.
I would also point out that my expectations were not high, as I have never really considered my floor based on concrete rafters/ screed containing underfloor heating pipes a challenge sonically, as I have never sensed vibration per se. Feels very solid with no apperent boom, when I jump up and down which happened on several occasions during my room treatment escapades

.
To believe that they will make up for modal room issues would be fooling oneself I believe. In this regard my room is performing very well and I have no deleterious reflections to worry about.
I have also been told, that various speaker manufacturers products take to the Podiums with different levels of improvement, but clearly this wobbly design completely breaks with the trusted good old spikes we are all used to.
As for the improvements: in the case of my Facts, I’d risk having to eat my hat, but I would seriously say everything. As this is pure mechanical decoupling at play increased resolution would probably be the wrong word, but like with the infamous G3 distribution box, which took all of us by surprise, it really is the only word I can think of. There is so much more information coming through from sound staging, dynamics, vocal and instrumental timbres and nuances this in equal measure from bottom to top. The ability to hear instruments and vocals in their respective recording space is also more highlighted- you are simply allowed into the recording session much more than I have ever heard my speakers being able to render before.
I bought my Podiums from Townsend on sale/return but tbh they aint going back and considering the level of improvement ( easily the G3 box times 2) I actually think they are a bargain certainly at this level.
With the unquestionable increase in believability of the replay maybe the best description will simply be MORE MUSIC and LESS HIFI.
I have no invested interest in the product, but I would urge people to try them, before just buying into another black box upgrade.
The journey has finished for me, but hey; ‘ It’s been emotional…’ 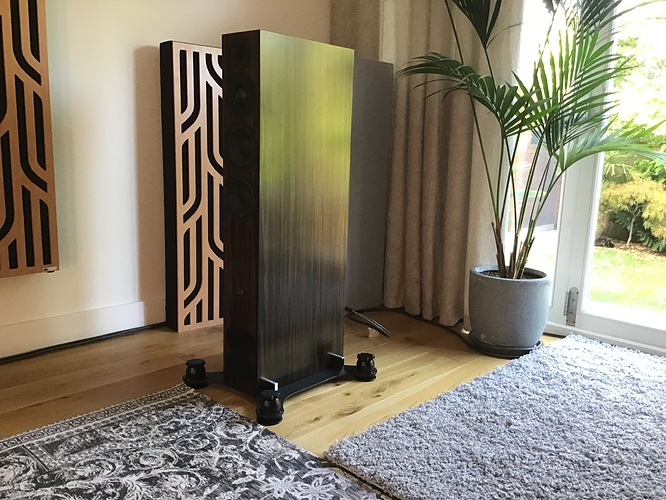 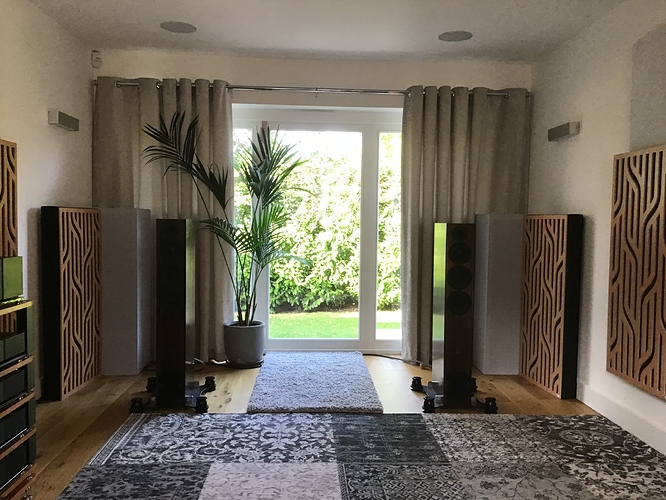 Hi Peter,
Delighted that you are so happy with them. How’s the deep bass now? Are you able to cancel the 3dB attenuation without room boom?

We found bass lines to be much clearer and more tuneful, once we placed our speakers on isolation feet.

Hi Bluesfan, nope still -3DB roll off which suits the leading edge of my replay in the room. Having said that, I can’t say that bass isn’t deliciously deep and resolved, and in my case at the right volume.

They’d last seen action supporting speakers at Scott Walker’s funeral, but that didn’t inspire any confidence as they looked like the antithesis of every speaker support concept I’d grown up with i.e. providing as rigid a base as possible.

In this case you get a flat base sitting on the floor, with a tri-spiked level on top of that, then another level balanced on ball-bearings. As you’ll see, they wobble, but are extremely secure. And they worked wonderfully - they took the floor out of the equation and let the speakers play with the rest of the room - the bass no longer boomy and the hardness the granite added to the mid-range gone. Magic! 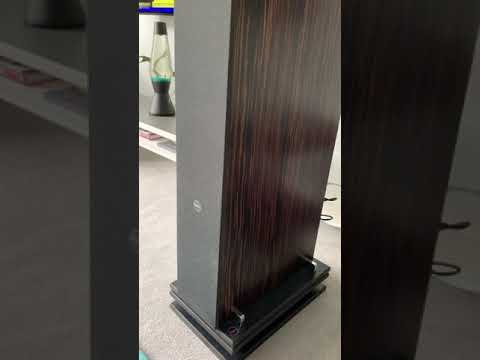 Note: The music in the background (Forlorn Elm) is playing on my computer.

Did you try them both with and without the Podiums? It reads as though you put the repaired speakers straight onto them; if that’s the case you wouldn’t know whether it’s the new domes or the support making the difference. The SL2, of course, rocks on its base.

I’m not sure what you mean by that. I’m simply trying to understand what exactly you have done.

Peter what happened to the midrange units?
I have used iso feet on mine for quite some time, and been happy with the results over the spikes, again on a solid concrete floor.

Hi Dunc, one of the 50mm mid domes developed a slight edge to it, and as they are paired ( even got the measured sheet print out for the 2 new ones frequency response) they both got replaced. But MY the Podiums, what an overall difference …

Good luck with your 552 Peter

How old are your facts? Mine are not quite a year old.
You say slight edge to it, what exactly do you mean by that?
I like the look off the podiums more than the ones I use, and if you don’t mind me asking, what did you have to pay for them

Nice one PeterR , another believer in the Podiums.

After all the years of having to have speakers spiked as solid as possible they sure are counterintuitive. But hearing is believing.

How the speakers are maintained?
They just sit on the platform without its spikes?
I am a true believer on the efficiency of these support, same for Isoacoustics, Finite elemente, Mpods…Chord Silent Mounths.
I have Finite elemente cerabases, but was thinking often on these Townsend, which I find nice too.

Well my Facts fall into the first badge of 50 pairs produced, so that makes them possible 2015? … dunno, as I bought them exdem. Price of Podiums Direct from Townsend is £1350,-

Indeed Folkman, TB was telling me they come as standard with the BB5s. My loan speakers btw. were a pair of IB2SEs, but they turned out to over power my room at the listening level I sometimes like. LOUD

ATB Peter
PS. Partly your fault trying them myself btw.

Hi FR, yes just resting on the Podiums without spikes- tbh I’m now not neither sneezing nor trumping in the room whatever comes first!

The Hungry Fish has a science background — and from methodological point of view, he has a good point. This sort of stuff we teach in Year One…

In any case, the OP is happy — and that counts for a lot in these dire days… Good to have something that cheers up!

I had pretty much the same episode with my Apogee Scintillas about a year an a half ago, which I added the Townshend Podiums. I needed a Size 4 as the Apogees are quite heavy. I heard an improvement in the first few bars of music. There were immediate keepers. I go them from a chap on eBay. Price was about half or so of what new would have cost. I have the Apogees plunked down on top of the right now, but plan to replace the Apogee bases with these things. Just need to get my strength up. I have grown to respect anything Max Townshend does. I have his ic’s, passive pre, podiums, and just scored a set of supertweeters. Just need some repairs on some equipment to hear them.

There was absolutely no cynicism whatsoever intended. I was simply trying to understand what impact the new drivers were bringing and what was coming from the new supports. It seems from Peter’s post that both were introduced together, which means that the contribution of each is unknown. The drivers or the supports could contribute all or nothing, which is surely important if anyone is considering either new drivers or buying supports.

The point about the SL2s is that they have a spring base and oscillate, so it’s quite possibly that Peter’s speakers will benefit from an oscillating base. And, of course, Peter owner SL2s previously and knows all about them.

It’s a shame that my perfectly innocent question was misinterpreted by some, seemingly deliberately. Maybe I’m no longer required around here. It seems that posts celebrating the spending of money and mutual backslapping go down better than those trying to get to the bottom of what is actually happening in the system in order to aid understanding.