Trying to browse by Choir, Period or Orchestra in Asset x86, Naim programme

@UQ1user Take a look at the thread I posted in Dec 2021 - it may do exactly what you want (except period, style). I am using AssetUPnP R7.4 (Windows). 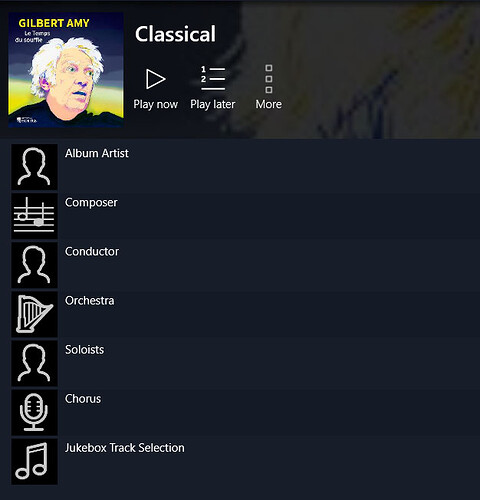 Adding Period and Style would be simple but I have found few albums with Period metadata (Modern, Baroque, Classic and Romantic so far).

Asset can do exactly what you want.
You need to do two things

If you nest the artist, orchestra, choir etc. under genre it allows you to separate classical from the other genres. I will post the detailed Asset info and instructions later.

Are you running on 32bit or 64bit machine, and is it running as local account or service?

@UQ1user AssetUPnP keeps its files in a folder “uMediaLibrary”.
Seach your c drive for this folder and then show the files.

IMPORTANT After making changes “refresh the data” and “Restart Asset” using the AssetUPnP configuration utility. This may take a (long) while.
If using a 64bit machine use a “local account”.

Note I have added Period which was not included.

I have added Period as a field 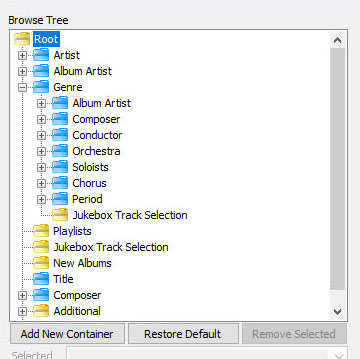 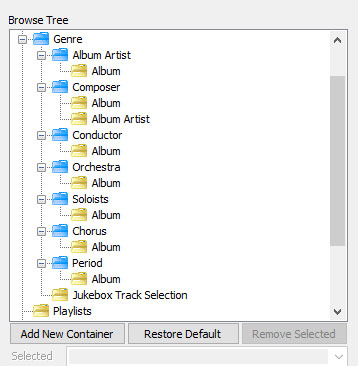 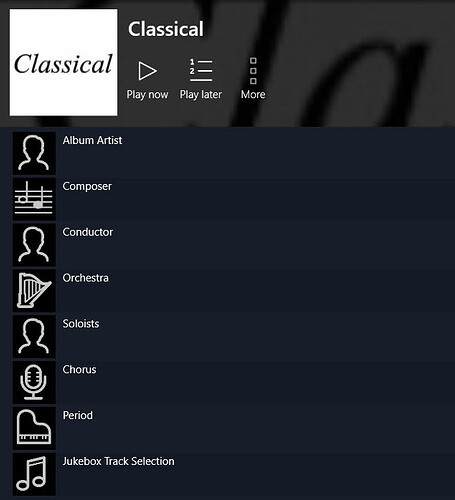 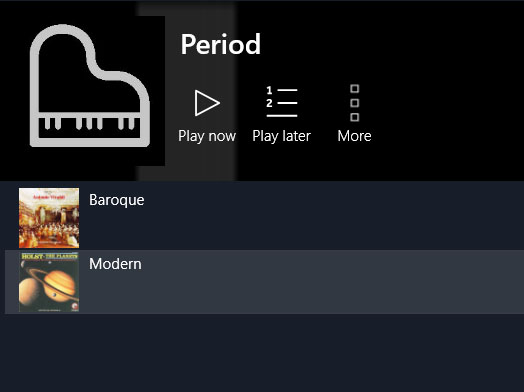 I’ve tried all the combinations of {no_track_list}, {a_to_z}, neither or both. refreshed the library, restarted Asset and restarted te Naim programme.

Ah, that’s where I’m going wrong. I didn’t know I had to declare tag fields in Asset.
Presumably the declarations are not case sensitive?

Do I need to define the conductor field as text? The composer fiekd isn’t but I can browse by conductor.

I probably can’t do much with many of those fields in the Naim programme but I put them in MP3tag for future use, should software come out that I can read the data and I get round to buying a tablet and have a display worth reading on.
The Naim streamers only work with the Naim application?

Ah, that’s where I’m going wrong. I didn’t know I had to declare tag fields in Asset.
Presumably the declarations are not case sensitive?

You only have to declare those fields in asset that you want to see in Asset.
Asset fields are not case sensitive, but Asset capitalises the initial letter so period becomes Period.
I think the fields default to text but you can define them.
Orchestra is a recognised tag and I use it for trios, ensembles etc.
Similarly Chorus rather than Choir.
Multi-line credits - not sure about limits but would be single text I think.

You should see the modified browse tree under Asset on the UPnP source on the Naim App.

OK if running as “local account” - there was R7.0 issue with 64bit and Service option caused by Windows moving file location as it was a 32bit App running on 64bit machine. Not sure if changed on R7.4 but with Local Account you will be OK. Perhaps therefore avoid Service option.

Mostly sorted out now but it took an age to refresh on Asset. I’m thinking of putting music on solid state (with spinning rust backup) as I quite often load my whole collection onto MP3Tag to endure fields are populated consistently across directories and that can take nearly an hour.
Thank you very much

I’ll probably come back and ask about tagging mentioned in the other thread:
(Changing metadata to improve Classical Music presentation)

but it took an age to refresh on Asset

Yes, it depends on the speed of your machine and importantly the size of your music library.
Glad you are making progress. Your plans were certainly extensive.

I need to add:
Opus

I wanted to search for Beethoven’s Op.131 today.
I do not have an opus field but you indicated you are planning to use one.
I was unsure to call it Opus or Work Number.
I can then add it as an option nested under Composer.
Are you including the other standards beside “Opus” i.e. BWV, D etc. as opus numbers?
What standards have you adopted for it?

Yes, I’ve used the field name Opus but it’s populated with WWV, BWV, S. x D. x H. x as well as all the the Op. x
I’m not sure what happens if I try to search for a work which has two different catalogue numbers e.g. K and KV (Mozart) or BB.100, Sz.94 (Bartok).
Many tags when I first ripped the discs with sBPowerAmp came in from the cloud with // or was it \ between two different entries in a cell. e.g. BB.100// Sz.85 ot BB.100\Sz.85 I’m not sure it that syntax lists tracks under both “BB.100” and Sz.85 in Asset or othe UPnP DLNA servers.
There isn’t really a manual to consult.
I might not search by Opus but it’s there and it’s handy:
to get a sense of when in the composers career the work was composed.
when I listen in cycles, e.g symphony cycles and do a chronological cycle then I guess I could use it as a search term.
Lotta scrolling through hundreds of cantatas to get to Brandenburg.
In non-classical music e.g. London Techno there are labels where people go by catalogue numbers. One reads a sales listing:
“For sale
SUF xxx
SUF yyy
SUF zzz
HYDR 001” and those in that scene know what on Earth the listing is. But that’s label catalogue.

I’ve used work for the name of a work, e.g. Der fliegende Holländer without composer or opus WWV 63, also Symphony Of A Thousand, Petrushka, La Mer …
So far I’ve only been populating that with works which have a distinctive title, like operas and not Symphony No. 1 in C Major because then it’s going to get bloated and difficult to find anything.

This is like life sciences taxonomy . One thinks one is on top of it and has a system, but some other grouping has so much diversity it needs new ranks of taxa like sub families, tribes, sections of cohorts.
Oh and as a splitter it’s a battle against the lumpers the record companies who tempt up with great value big boxes, all the symphonies and concertos but they add in smush, filler tracks, oddballs, orphan tracks … an overture here, a vorspiel there, a bolero in that other void just to use up the space.

Whilst not perfect this is where Roon excels and is worth considering despite the initial and ongoing cost imho.

A quick view of all compositions and a couple of filters gets you to the composition @Paul_C mentioned. 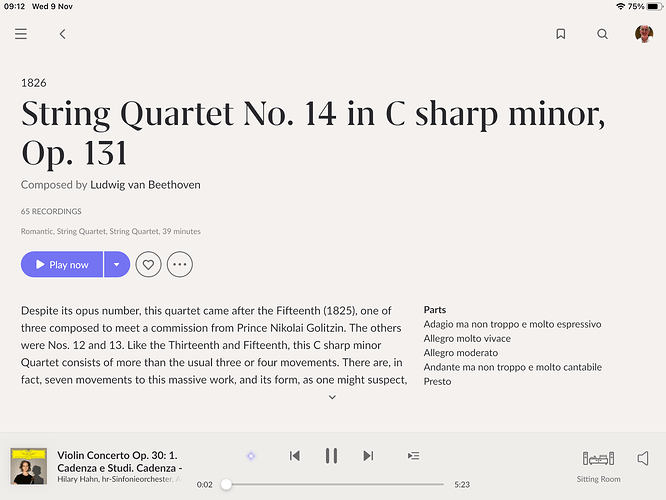 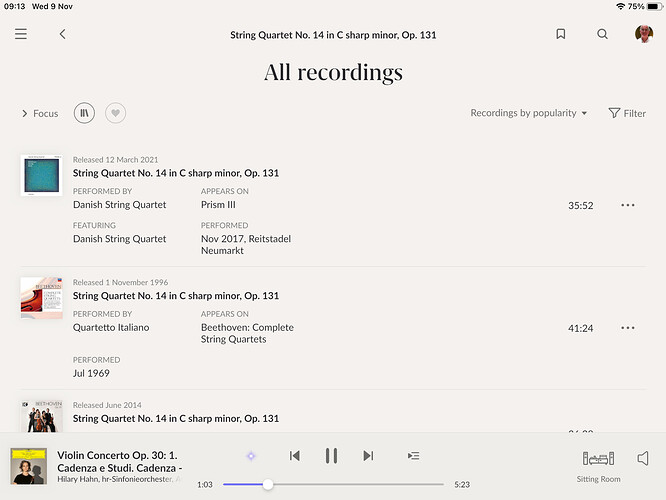 Have added Opus tag and added opus nested under Genre classical)/Composer.
It appears as a string and is not cross-indexed by Asset (this is only done on some tags -Artist/album artist/composer etc using "; " (semi-colon and space). 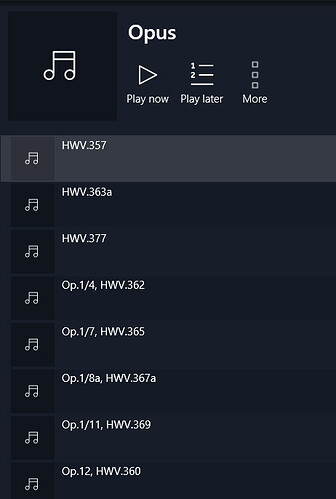 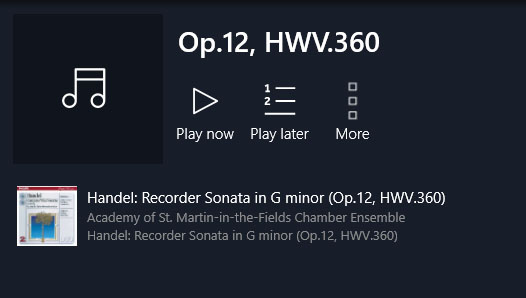 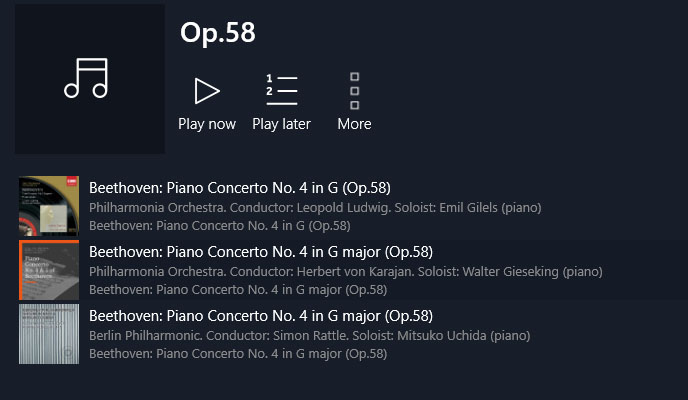 But a bit of a waste of time?

Lots of metadating for the dark Winter nights ahead.

I installed Kazoo but it just sits as “Looking for room”. I guess only the Naim programme works with the Unitiqute 1 but I didn’t expect it to work since I don’t have a Linn streamer.

You asked about standards. I don’t have any.

I found this organisation or industry body DDEX which works on standards for metadata, which appears to be for the recording supply chain and content delivery industries.
https://kb.ddex.net/display/HBK/Release+and+Resource+Metadata
Which I found from Youtube video of theirs I found Classical Music Metadata (March 2022) - YouTube

You mentioned in the other thread you keep a file. I maintained a similar external file with data of composers, conductors, soloists choruses, orchestras, recording venues, concert halls, operas
It was a Microsoft Access database *accdb, my subscription to Office 365 expired and I won’t afford to keep paying them subs every year so I.m having trouble accessing that properly with Libreoffice.

From the tables in that I copied and pasted over poorly-populated tag fields which have either missing diacratics or use a plethora of informal or simply incorrect names.
I stick to birth names

Keys in EN, DE, IT, FR, ES, solfege, # and ♭ symbols, so I can copy and paste to reduce character count.

It works out better preceding the work title with composer surname for sorting on my mobile handest or other devices where I don’t have the directory structure.
I’m not that fussed over the singers (unless awful) as I’m not ablr to tell much difference but singers’ performances of different releases crop up frequently in threads on classical forums so to learn more and take part in the conversation I’ve tried listing a few in album titles in the abscence of being able to look at he back covers in the Naim programme.

It it Asset or the Naim rogramme which inhibits the ability to browse te cover art I spent so much time looking for, downloading and in many cases, scanning?

First thing first, after ripping I look up the reelease on Discogs, them populate the DiscogsalbumID field with the release ID from the top RH corner of the discogs page. Click it, a bubble pops up “copy release ID”, right click, click on copy then past to the form. That’s there so I can refer back to it.
I then copy and paste all the credits including companies, recording dates to the multiline (set at one line) credits field then it’s quicker to copy and paste from the credits in MP3tag rather than switching back and forth to a webpage or my database and the MP3tag panel.
I split albums e.g with two or more works on them after I populate enough of the fields that I could reconstitute the original album if I want or need to e.g. to burn a CD. The tracks stay in the initial directory so it’s not necessary but I added a Boxset field but use that loosely for parent album.

Don’t ask me though. I don’t know what I’m doing and it’s you who will be browsing your system for music.

I installed Kazoo but it just sits as “Looking for room”.

Yes, Linn Kazoo only works with Linn streamers like the Naim app works only with Naim equipment.

Is it Asset or the Naim programme which inhibits the ability to browse te cover art I spent so much time looking for, downloading and in many cases, scanning?

Asset and Naim should show track cover artwork included in the music files or as a folder.jpg (or similar) but other artwork is not presented even in the folder/filename view. It don’t think Naim app would not know what to do with it anyway.

Actually that is not true. Kazoo (and the more recent Linn control app) will control any renderer that uses the OpenHome protocol, all Auralic streamers, for example.

In fact, Kazoo will also work with Naim streamers such as my Atom, provided the Atom is made OpenHome compatible. This can be done by running BubbleUPnP server somewhere on the network (I have it on my NAS) and setting it to make the Naim device OpenHome compatible. You only need to do this once, after which the Naim box appears as a device. I find it useful for controlling the Atom in my office from my desktop.

Actually that is not true. Kazoo (and the more recent Linn control app) will control any renderer that uses the OpenHome protocol, This can be done by running BubbleUPnP server somewhere on the network

You are of course correct. What I should have said was “Out of the box …”