I think this has been covered here before but I couldn’t find anything in the search function.

RP10 TTPS currently plugged into the hifi mains and I get a pop through the speakers when turning off the power to the TT.

Anyone had similar and, if so, any fix advice assuming this isn’t normal?

Do you mean completely switching the TT off, or simply switching the motor off when a record has finished? If the former it is presumably because you are not following the switch off sequence - sources off last and on first.

I have an RP-8 with a TTPS, and there is nothing audible when I turn the TTPS off and on, even with the volume up pretty high. It’s silent.

I wonder whether the switch in the TTPS has an issue. Can you bring it into the dealer and see if it pops on their amps?

I don’t think it’s a problem with the TTPS as (a) it’s intermittent and doesn’t happen every time I turn it off; and (b) I used to have the same thing with the Neo TTPS when I had my RP8.

It’ll probably be something to do with the earthing or mains conditions in my set up. I might try it with the TTPS plugged into the non hifi mains to see if that makes a difference.

End of the day it’s not a big problem. I was just curious to learn if anyone else has experienced similar.

Is this with any input selected on the pre or just the phono?
I can’t say I ever had this issue when I had a rega arm into my superline but I can’t say I didn’t, it was over 10 years ago, I certainly haven’t since. For most of the time I used a Rock with an Merlin ps which was always plugged into the same block as the system and left switched on, I only used the double pole switch on the deck to stop the platter.

@DaveEngland I had an issue where my Rega TTPSU wasn’t grounding very well and giving me noise through the speakers whilst switched on and also a click/pop when I switched the unit off. I cant promise its the same problem as yours but its quite a know fault and a few clips on YouTube about it, plus it was an easy fix and worth a try. I grounded the body of the TTPSU to the ground point on my mains extension plug box. I understand the PCB withing the TTPSU is grounded to the casing but as its only a 2 wire 12v mains plug the casing is not actually grounded to anything. I loosened the LH (as you look at it from the back) screw from the casing and slid a fork connector under, this is the side Rega ground the board through, try not to remove the screw completely as the Rega PCB ground lead is secured to the front panel and may become disconnected if you do. then I ran the my new ground lead to my power box which has a ground point, this removed any hum or clicks I had from my P6. Fingers crossed its a stright forward fix. Hope that helps.
Phil

Yes I looked at that video; a guy taking his RP6 TTPS apart and attaching a DIY ground wire.
The RP10 PS is much more complex and extensive than those for the lower REGA TTs and I won’t start taking that unit apart, particularly as it would invalidate the warranty.

The issue he was complaining about was a persistent hum along with a pop on turn off. Mine has no hum, just the intermittent pop through the speakers when I stop the platter at the end of the record.

I’ll mention it to my dealer.

I have the same, but it’s not so loud - it happens when I switch the speeds on and off. I think it’s picked up by the Superline. I just ensure that the volume level isn’t right up high when I switch the Rega PSU. It is otherwise totally silent, and even with the volume level up way high, the Superline is just amazingly quiet for a phono stage, with just a slight hiss increase, but no hum or buzz at all, so I just don’t worry about it.

Hi Richard, that is exactly the scenario I have. I’ll leave it as is. Good tip re turning the volume down when turning off though. Thanks!

Yes me too, but I have the TT PSU as far away from the boxes as the cable will reach. It doesn’t make any noise now. Even near the nDAC it did it. I don’t have it on the HiFi supply and I believe mitigating the noise doesn’t deal with the degradation it brings if too close to the Naim boxes. I’ve made this point to others in the past.

Interesting. So your advice is to keep the TTPS as far away from the Naim boxes (i.e. Superline, 552, NDS etc) as possible even if that might mean moving it closer to the RP10?

In my set up I have the option to move the TTPS to where the Unitiserve is and put the US where the TTPS is. I can also have the TTPS on the non hifi mains. 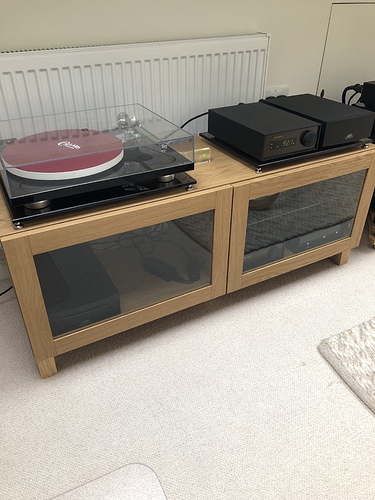 So your advice is to keep the TTPS as far away from the Naim boxes (i.e. Superline, 552, NDS etc) as possible even if that might mean moving it closer to the RP10?

Everything! It is to the right of the RP10 as far as it will go, the RP10 being on the right of the three stacks. In actual fact it is on a wooden kitchen stool behind the sofa so it doesn’t have to be visible. The Aria is on the left a foot above the 552 PS.

As Phil says, trying to get it as far from the Superline and pre-amp lessens the plop sound but in my case I can’t get rid of it entirely*, although having moved it to the far side of the bottom of the brawn stack it’s now much less than I had initially. However, it’s now at such a low level it doesn’t bother me any more.

*Only other option might be to move the whole Turntable on to an Audiotech stand off to the side of the three Fraim stacks, but then that brings other issues that might well be even worse.

I’d also add that the Aria needs to be kept Powered up to sound it’s best. The TTPSU can at least be powered without the TT running by pressing the speed selector (acts as a toggle). No pops that way.

I have the same, but it’s not so loud - it happens when I switch the speeds on and off. I think it’s picked up by the Superline. I just ensure that the volume level isn’t right up high when I switch the Rega PSU. It is otherwise totally silent, and even with the volume level up way high, the Superline is just amazingly quiet for a phono stage, with just a slight hiss increase, but no hum or buzz at all, so I just don’t worry about it.

I have the same gear, same pop, and I have always dealt with it just as Richard describes.

My RP10 ps does the same- when turning off. Woudnt worry about it-.just turn the volume down. My Rega TT ps on next rack to phono and not into same mains conditioner

Many thanks all. Extremely helpful as ever.