I have an Nds since 4 years and very rarely listened to radio.
Recently I am enjoying a lot Fip radio, 24/192 aac ( ?) and find it more enjoyable than zapping through Tidal.
The audio quality is similar to Tidal, for my ears.

I wonder if listening to the same radio through an Fm Tuner, like Naim Nat 05, would still be better on sound quality, or very similar.

I would say that you are listening to compressed audio from FIP at 192kbs AAC. They must have it sounding good though by colouring (enhancing) the audio steam.

I cant tell the difference (in sound quality ) between different radio sources, but I like the idea of ​​the analog radio for the possibility of maintaining autonomy, in case of being without a network. similar to what I do with the streamer: all my collection on a USB pen, if there is no network signal…

@frenchrooster. I think my Nat 05 on R3 and R4 sounds superb. I find this perplexing because most of the music from R3 barring the live performances will have been rendered through a digital source. Nonetheless it’s really good, an organic rich sound.

I don’t know what really is aac, but know it’s compressed vs Flac. However, on Fip i radio, it’s really on the same level as Tidal 16/44 streaming. I find it’s surprising.
Perhaps compressed files through i radio sound better than compressed streamed files from a server or online streaming?

I had an entry level tuner before but I had difficulties to receive properly Fip radio in my home. Through Nds, the sound is cristal clear, no drop outs or annoying noises.

I listen to both Naim’s iRadio on my NDX & to the public broadcast FM services on my NAT-05.
Each has pro’s & con’s, R3 is superb on FM, but the BBC’s HLS HD services on iRadio are not far behind. That reverses with the BBC stations that use compression, then iRadio (IMO) is better.
FM only has the limited numbers of stations being transmitted in your area, whereas iRadio has tens of thousands of stations from all around the world.
But invariably on a day to day basis for background music & keeping up with the national & local news, I use my NAT-05.

I am not familiar with distribution of FM outside the UK… but in the UK the signal is distributed to transmitters digitally… so it’s not really analogue. From memory it’s 14 bit non linear PCM using a NICAM system.

Hi FR,
I am in Paris listening to FIP and France Musique a lot using an MD-107 tuner and it is just superb.

Do you have a proper antenna?

It is the same here in Sweden. I’ve just listened to a liverecording of Stravinskys Firebird over 320kbps AAC. Maybe it is just well-recorded but but in total It was a quality recrding despite the lossy format.

No, no proper antenna. Maybe the main problem?
However I have fiber since some weeks now and the sound from I radio improved for me.
But I believe you if you say your fm tuner sounds better. However it’s a very pricey Magnum Dynalab I feel?

Right, it’s very pricey. But I had an MD-100 which was also brilliant and infinitely more reasonable. It is now on sale in a HiFi shop in the préfecture of the Yvelines.

When I bought it, I compared it with the NAT05 and thought it was better. I listened to a lot of FM with it. It’s the MD-100 that gave me the envy to go up the MD ladder.

The experiment ( in Portugal) started in 1998 conducted by RDP ( National Public broadcaster) which set up a network of DAB transmitters, which debuted during Expo "98. The dream ended in 2011. Faced with the need to reduce costs, the administration , chose to shut down the DAB system, invoking the high maintenance costs and the little acceptance that the system had with the Portuguese.

If you are interested in FM you should get a good antenna. The ST-2 from MD is great, even indoor. Not very pricey.

Hi, yes DAB is very different in the UK and has its own more modern distribution network I believe.

I listen to FIP all the time , through VTuner at 185 at home which does sound really good to me too and through the IOS app when I’m out and about . I never feel it’s lacking in quality and just happy I can listen to it across La Manche . 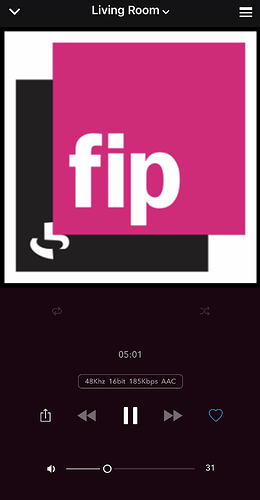 I was investigating the same thing before moving from my Nat 05 to a streamer and this is the information I obtained.
"Hello Roger,

The BBC continues to use the Nicam 3 coding system for distributing its national FM radio programmes, although the circuits used from London to the transmitters was progressively changed in the period 2014 - 2016 to BT provided MPLS. Internet radio uses more modern coding systems such as AAC.

Martin Brown
mb21 Editorial Team"
"I know Martin B has replied to you, I’d just add a little rider about the quality.

VHF/FM has stayed the course remarkably well, but it has to be said that - at least for me - the Zenith GE stereo system will always be its Achilles Heel, however good a tuner one might own. In addition, the variable pre-emphasis used to roll off the treble on high modulation will always dull the sound to a certain extent, given that there’s also a brick-wall audio frequency cut-off at 15 kHz.

In addition, absolutely everything is processed on VHF/FM, including Radio 3, even now for live concerts. This processing makes a mockery of any idea that the BBC signals on FM are hi-fi, Radio 3 is the least bad, the others sound truly dreadful.

For years my preference was to use Radio 3 DSat or DTT, because although the bit rate used of 192 kbps is only JUST good enough for high quality, the audio signal is unprocessed. There’s no real advantage to use DSat or DTT for the other BBC radio networks, they sound as compressed as their FM equivalents, although Classic FM is a bit better, because whereas the processing on FM is egregious, it’s much gentler on Classic FM digital.

Turning to the internet, if you locate the high quality stream of Radio
3 then you can have the best of all worlds, as the bit rate is 320 kbps which is more than comfortable, and there is no processing. Unfortunately the other BBC networks - as for DSat and DTT - are processed, a total disgrace and an idiotic engineering decision, although I doubt it was any self-respecting BBC engineer who made it.

I know there are people who swear by VHF/FM, but I suspect they’ve become “deaf” to the processing that takes place on it.

Anyway, whatever decisions you make I hope you get the satisfaction you’re looking for, it’s always good to know there are still people around who try to get the best quality they can.

Martin W (the other Martin)."

"Well to a certain extent I think you have to decide which sounds best to you, and there are always people who say they prefer analogue; (hilariously, in about 1982 - 83 when CDs came out there were audiophiles who swore blind that they could hear problems with “digital”, and held up the BBC Radio 3 FM quality as superior “because it’s all analogue”. We had a good chuckle at the BBC about that, given that they’d not noticed that PCM distribution (the forerunner of
Nicam) had been in use since 1971 to distribute the network signals to the FM transmitters).

Nicam is a “lossless” (at least I think it still is!) digital system: even though it does economise on the number of bits used, it does it in a way that is transparent to the audio going through it. Techniques such as mp1 or 2 (mp1 layer 2 I believe is used in DAB and on satellite and DTT) are lossy, and only really become hi-fi at and above 192 kbps. But the moderner digital coding systems, such as used on Radio
3 internet, are vastly superior at any given bit rate compared to mp1, so when one jumps from Radio 3 satellite or Radio 3 DAB (mp1 layer 2 at 192 kbps) to Radio 3 internet via AAC at 320 kbps then one’s going from just about OK to pretty much subjectively lossless, even though it’s still technically a “lossy” system.

All of which is a long way round to say that as far as I’m concerned one can equate the quality of Radio 3 on the internet to anything that Nicam distribution to the transmitters can do, but in the latter case the audio is then transmitted on FM using the Zenith GE system (with its poor S/N ratio), and with processing, variable pre-emphasis, and a 15 kHz cut off.

So for me there’s no contest, my lovely Revox B160 tuner has been in the attic for years, but I would urge you to do as direct a comparison between Radio 3 FM and Radio 3 internet as you can before you decide, because even though I don’t consider the “warmth” on FM to be actually how it should sound, there are many who prefer it to the more clinical (and in my book, more accurate) sound of good digital.

It’s a tricky question because both NICAM use for FM and the ‘AAC’ used for iPlayer output are ‘lossy’. i.e. they have to discard some details. And the NICAM also then goes via FM which has its own limits.

However to my ear, and to some extent via measurement, the AAC and BBC iPlayer win. Various reasons for this.

works because it doesn’t need to exceed these, lower, FM limits.

In practice FM is often limited by the listener’s tuner and/or local effects like interference, low signal levels, or ‘multipath’ that adds distortions. Whereas if you have a reliable internet connection you can have the AAC stream from IPlayer without it being altered in transmission to you.

in practice, the BBC do not apply as much level compression, etc, to the

iPlayer output as is appled to FM.

And if you can use the ‘get-iplayer’ program you can fetch the source files and play them as you choose. e.g. on a good dedicated ‘personal player’

that plays files for headphones.

All being well, BBC FM can sound excellent. But…

This may all explain why, personally, I now much prefer the iPlayer.

The BBC continues to use the Nicam 3 coding system for distributing its national FM radio programmes, although the circuits used from London to the transmitters was progressively changed in the period 2014 - 2016 to BT provided MPLS. Internet radio uses more modern coding systems such as AAC.

That is correct, but in the context misleading.
FM uses Nicam distribution which uses 14 bit non linear PCM at 32kHz sample rate (32/14). This is a lossless digital audio encoding albeit with limited resolution. The Nicam is the multiplexing transport not audio encoding.
Yes indeed AAC is a newer lossy audio encoding codec (The same codec used in iTunes downloaded for example) , but it is lossy, albeit is distributed typically at 48/16, but it is lossy and uses psychoacoustic masking techniques by discarding audio information that it is suggested through survey and test most people don’t find relevant.
You pays your money and takes your choice… both FM and Online are digitally distributed formats. One is lossless but is resolution and bandwidth limited, the other has potentially greater resolution and bandwidth but is lossy.

I never moved on from my NAD 4020A. By the time I was ready to consider a tuner upgrade FM was already due to end in the not too distant future and the NAD is actually pretty good, a bit soft maybe. It stays tuned to Radio 3 so it’s easier to select via the 552 remote rather than reaching for the ipad and waiting for the app to connect to the 555. When I have compared the two the 555 has it on dynamics but the NAD wins of a more fluid sound with a better sense of scale. It’s still hanging on to its Fraim shelf for now.