How does the quantity of power generated each year look ?
Has the quantity gradually increased, decreased or remained roughly constant

‘mornin’ Don, after many years of steady growth we have got into significant reduction since the mid 2000’s.
The data is complex & in many cases does not go back that far enough to show change over a longer time.
Best (simply) seen in this graph showing TW-h generation of fossil fuel decline & growth in renewable’s that goes back to 1980
And the total combined fuel source going back to 1920 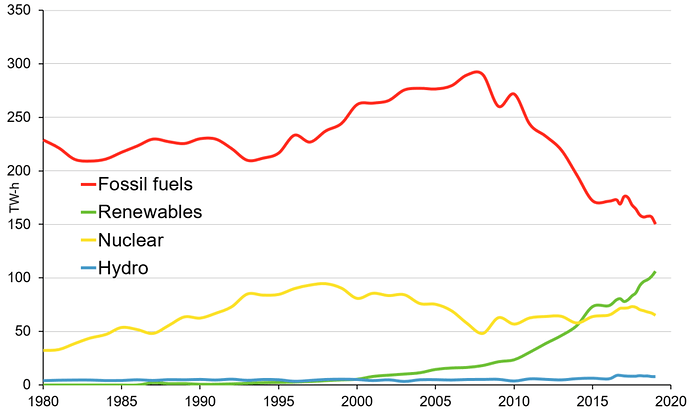 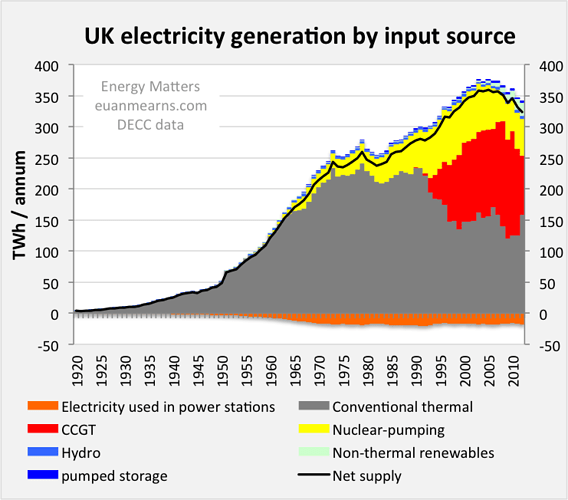 Make of it what you will…

but I do question the superficial flaunting of Green credentials on the part of, (in this instance), our UK energy suppliers.

This article needs to be seen by more folks, confirming as it does, for me at least, the smoke and mirrors approach to eco-friendly compliance on the part of our energy suppliers and HMG.

The truth is somewhere in-between the exaggerated claims of both sides. Without seeing the actual research (including raw data and statistical analyses) form both sides, I’m not prepared to say which side has the better argument.

A further example of a less than truthful approach is where, we learn that so much of our “re-cycling” just involved stuffing it into containers and shipping it off to third world countries, where it then became “someone else’s problem” 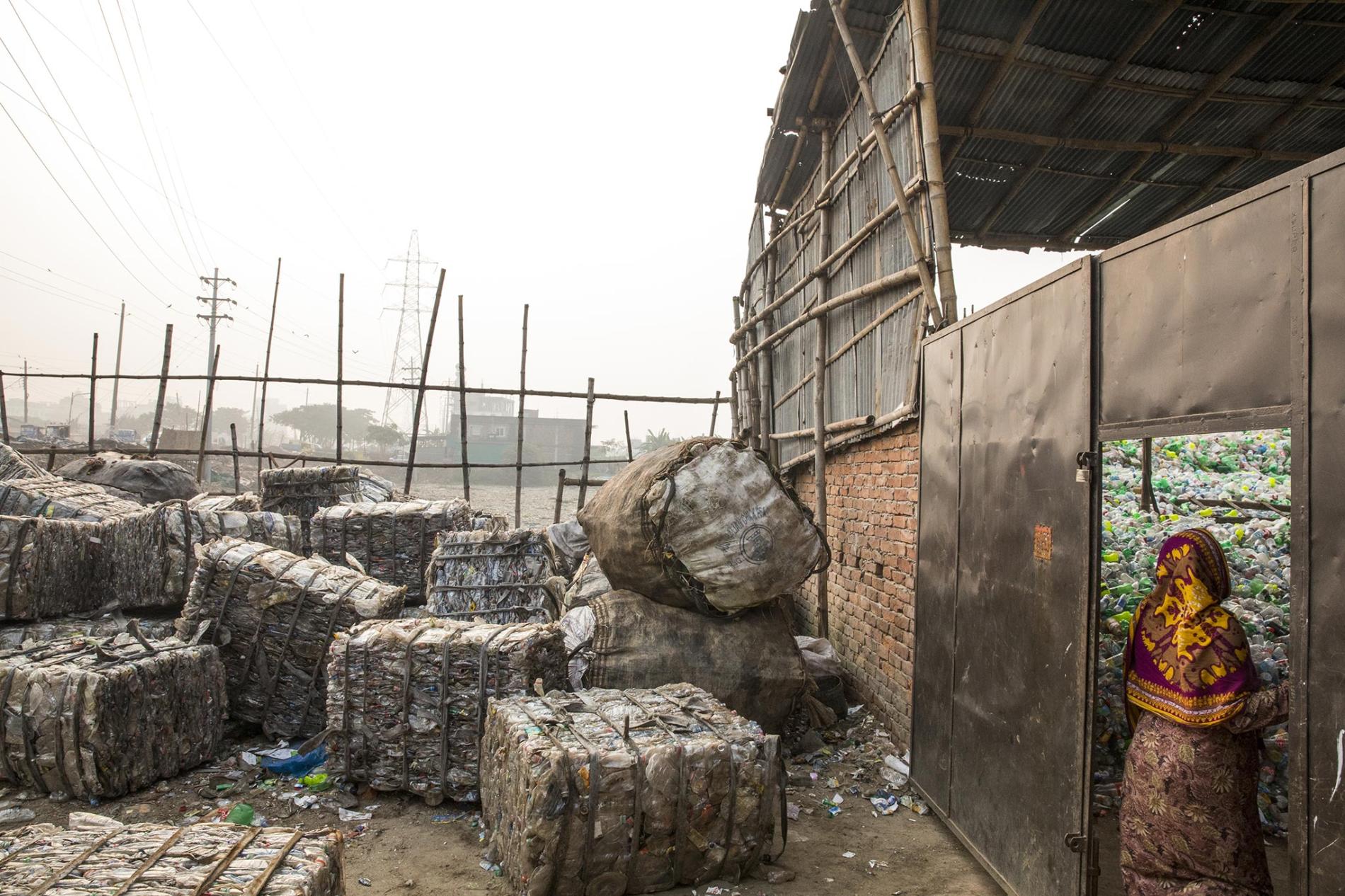 More than 180 countries have agreed to include plastic in a treaty regulating exports of hazardous waste.

The treaty referred to in the article suggests that this practice is now frowned upon, though, interestingly, the USA did not sign.

but it takes many years for any replanted trees to grow back,

It depends on the trees involved - willow for example can be harvested as short rotation coppice every 5-7 years. The issue with other trees is that a lot of plantations are ready to harvest now, but require substantial labour to replant. At least willow regenerate and may continue to produce biomass for decades.

Now the issue of monoculture is important to address as you say:

form of monoculture that has a catastrophic effect on biodiversity.

This may be mitigated by planting mixed woodland or by inter planting with other biomass sources such as miscanthus, alternatively Agri-forestry mixing trees with grasslands can be productive.

In any event more research is required and, more problematic is a change in our consumption patterns with a greater recognition of the value and importance of biodiversity.

Back in the early 1990’s I was part of a team contracted to assess the environmental impact of a central London Borough. It prided itself on it recycling progamme; sadly we discovered all the glass and paper it collected from recycling centres were loaded onto barges and dumped in landfills in Essex. As a result their State of Environment Report was somewhat muted.

The truth is somewhere in-between the exaggerated claims of both sides. Without seeing the actual research (including raw data and statistical analyses) form both sides, I’m not prepared to say which side has the better argument.

100% agree on that one Xanthe.
Drax is/was the largest coal fired power generator in UK, it was placed where it is to enable a direct rail & conveyor belt feed from the area’s coal mines.
Responding to the directive of reducing carbon emissions & eliminating coal produced power, its going through a program of co-firing & re-powering to biomass & eventually adding CCGT.
Biomass is a relatively quick easy conversion from coal including more effient carbon scrubbing & carbon capture.
Biomass is not just wood pellets, & wood pellets can/are sourced from other places besides US/Canada. The way the timber companies harvest their forests is up to them, the wood pellet production in others areas that I’ve seen do not have the kind of mess shown in the “i” (news) report.

Oh, I agree. The shipping of the wood is a very bad idea. The wood waste should be burnt in Canada for power to offset coal power and the credits traded. Physically shipping the wood is a stupid market distortion. It is all one atmosphere. If carbon emissions were properly priced here Canada, we would not be exporting this stuff, but using it domestically.

Before we all get bent out of shape over biomass generation:
And I should have made it a bit clearer in my last post that the conversion from coal to biomass is a transition to CCTG or something else & that burning biomass is not much better than coal for the environment.

However this picture is the power generation types as a whole into the NG. You can see biomass, in its various forms, including energy recovery from refuse (land fill avoidance) is 6% of the total.

Yes, of course timber can be produced in a less damaging way. Is anybody in Canada, or anywhere else, growing timber to be burnt in the UK in well managed willow coppices, mixed woodland etc? I think we all know the answer to that one! 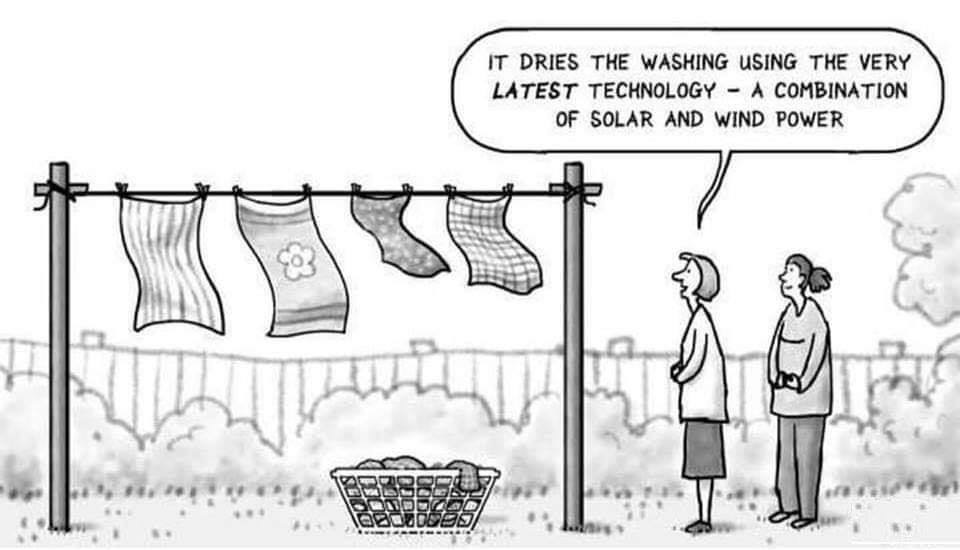 Hmm a think a few car companies (VW for one) might share a degree of responsibility here.

!).
And it’s not just with diesel engines, a similar thing can be done with the fuel consumption (and CO2 figures) from petrol engines.

VAG didn’t have a patent on ‘cheat’ software …
… a similar thing can be done - and is - with the fuel consumption
and CO2 figures from petrol engines.

I wouldn’t call it cheating, but after numbers of years ‘playing’ with getting the best results in Euro diesel emissions, fuel consumption & energy input/output I found it plain for all to see that its the test standards that are not specific or robust enough

Here is a snippet from the Land (issue 25, 2019), an avant-guard production, that takes an acute view of Drax. 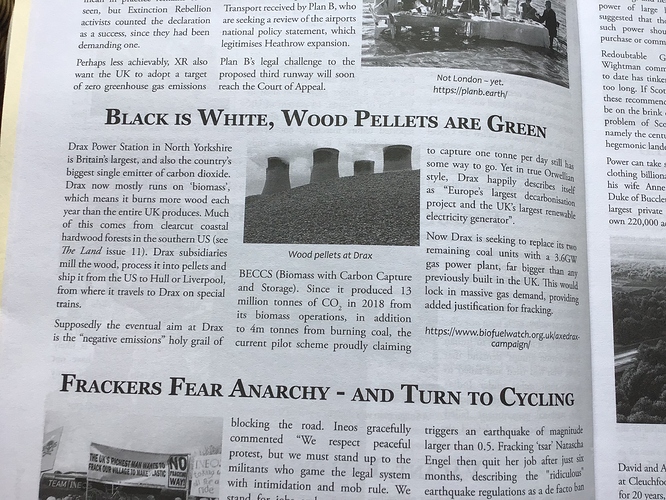 Yes I read & fully understand & agree with all the objections.
Problem is we will have to keep fossil based fuels such as the CCGT expansion plans that this politicised Drax paper is all about & we will need to rely on fossil fuel for some time into the foreseeable future & by that I mean long after 2050 as the foreseeable future.
We cannot depend on wind for 24/7 power no matter how many wind farms we have, ditto for solar, & I am not aware of any battery technology that can compliment any shortfall in wind & solar with enough capacity other than for short term boost duties . Biomass can only be a drop in the ocean in its energy recovery potential. The only way we can go to truly zero dependency on fossil is to go to a lot more nuclear - do we really want that ??? If yes then that will take many more years to get enough capacity on line & I suspect that will be after all on this forum are long gone…
Truth is modern CCGT technology with advanced carbon scrubbing is about as low as it gets in all forms of emissions. We need these new CCGT’s at Drax & the other plants, don’t kid yourself otherwise, assuming you want to keep the lights on.

I’ve long been a fan of nuclear since reading Fred Hoyle in my student days, but it did not stop me declining a job from British Nuclear Fuels. Human error and wilful shortcuts, not to mention lack of disposal options, means it’s a poor option.