I have a very simple test setup:

When I turn on the device, I get a very noticeable buzz out of the speakers shortly after the unit makes its usual clicking sound.

I did take my unit into the shop I bought it from and try it out in their sound room. There was no buzz using their power cable and a pair of what I believe were ProAc D20Rs. Just a very light high-end hiss, which I have been told is characteristic of class A/B amps.

One other interesting tidbit: I borrowed a Uniti Atom and while there was still a buzzing, it was much less pronounced.

What would you do?

Interesting solution. I’m in the US so unfortunately I’d have to find another provider of this than the result I found.

As a poor-man’s test, I went around and unplugged most everything of significance in the house. The fridge, furnace, computer systems, smart plugs, etc. The only items that stayed plugged in were unused lights, the dishwasher, and some of the light switches I have in my home that are z-wave enabled.

The buzz did not change at all.

Have you tried flipping the ground switch on the back of the Nova (you don’t mention it) as you appear to be describing a hum loop, rather than DC on the AC supply (which is a common cause of humming, but from the unit itself, not via the speakers) ?

Do you have your Nova set in “server mode”?

If not, you should try this as my Nova pops and make noises, both from itself and from the loudspeakers, when I start it up if I do not have it in this setting.

If I do have it in “server mode”, it is quiet as a mouse when I turn it on.

Just tried this. It unfortunately did not make a difference either way.

By “server mode” I assume you are referring to the file sharing feature (or UPnP) that the software supports? I went into the Naim app, Other Settings and checked “Server mode” but it didn’t make a difference.

To help, here is an audio sample of the issue. You’ll hear the unit click on at first and then the hum will follow.

It sounds like you’ve tried most things, including substitution of the Nova. As the buzz goes when you take it elsewhere it sounds like it’s an issue local to your home. I assume that apart from power, network cable and speakers, nothing else is connected to the Nova ?

Where is the Nova normally located. You mention trying extension leads to different mains sockets but have you tried the Nova elsewhere in the house ?

Can you turn off the lighting circuit with the Z wave switches on it, just to eliminate these ?

Do you get the buzz if you use headphones. Is the buzz still there using headphones with the speaker cables disconnected ?

If I do have it in “server mode”, it is quiet as a mouse when I turn it on.

That’s because if it’s in server mode, it’s already turned on.

I ran a dedicated line to the outlet my Atom (and soon to be Nova) is using, no such noise. In thoughts about a power conditioner or upgraded power cord, I fall back on “why?” I have no problem I need a solution for. So I suggest a dedicated main. I had an electrician with helper come in, with them supplying materials and the total was $202. That is something good to do regardless so maybe start there. A line directly from the box to the outlet cannot have any interference from the house.

You could actually test this before running the permanent line. Have someone qualified put a breaker in your panel, connect a 12-3 wire (I’d guess you’d need run a comparable length wire for an effective test?), run it to an outlet (either permanent you can access or a temporary) plug in and see if the noise is gone.

As per James’ post, are you able to disable the Z-wave system to test whether that is causing the problem?

I have to say it does sound like some kind of RF problem. I am a bit concerned about the fact there’s a large transmitter nearby as this can be a problem in some countries. However, if you can test the Z-wave first then that can at least be counted in or out of the equation.

Thanks for the feedback @Richard.Dane , @airedog , @ChrisSU and @james_n . I did some additional testing today that I wanted to share.

I set up an iPhone next to the speaker to read the dB level of the buzz. I then swapped in different power “solutions”, such as a Furman Power Station 8 and a AVA Humdinger. I’m told that the former helps smooth out the AC signal and the latter can re-center the AC signal if it’s somehow unbalanced in the positive or negative direction.

What I seem to have found is that neither of these devices made much of a difference, even when used in tandem. I seemed like the buzz was a bit quieter with certain combinations, but then running a second trial of each scenario led me to believe that the differences were either caused by ambient noise outside or that the Nova seems to establish a baseline of buzz volume at boot and just kinda stick with it from there on out. So, I can’t conclusively say that either of these devices helped the issue.

This leads me to believe that there is not a power issue in my home, or perhaps the power issue is one that these units doesn’t account for. Possible?

I plugged in a pair of headphones to see if the buzz also comes through cans. From what I can discern, there is no buzz through the headphones. I am testing on a pair of Beyer Dynamics DT 770 Pros, 80 ohms, if that matters at all. This is with the speakers still plugged into the unit.

The only other test I can think of at this point is to relocate the unit in the house and also relocate my speakers. Not a lot of fun to do, but I’ve come this far, so why not.

What else am I missing here? I now feel like I am absolutely going mad

For reference, here is a picture of the radio tower that’s in view of my home. 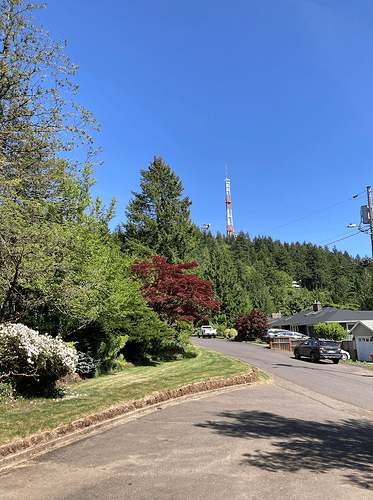 I had this buzz when I connected only my ifi zen blue dac to my Supernait 3. After adding my Arcam cd player (with earth connection), the hum disappeared. I contacted my dealer who advised me that it was a grounding issue. The ifi zen blue did not have an earth connection via it’s power supply, hence, the buzz.

I suspect a grounding issue too but if the switch on the back of the Nova has no effect the house wiring may be where the problem lies. Is there actually a ground connection in the socket used? There wasn’t in the sockets in our livingroom when we moved in but there were no contacts or pin so it was obvious (this is in France).

You didn’t mention whether you are just using the Nova on its own or have other sources plugged in. Some of your previous posts mentioned a Phono stage ?

It could very well indicate that the speaker leads are acting as aerials and are picking up interference from the transmitter. If you are able, could you try moving the cables around - try, the runs close together then separating the runs and see water any of that makes any difference.

Otherwise it could be something being modulated by the RF on the amp output. In which case, It would be worth discussing this with your dealer and seeing whether another example may be less affected.

I’ve known high power transmitters to do some very odd things - even preventing some kit from working at all. In the UK and Europe I think transmitters have limited power so such things are usually avoided, but in other parts of the world, not so. I’ve known a few incidents of this in the US and Canada (indeed, experienced one-such myself in a hotel with a powerful transmitter on the roof) and at least a couple more in the far east.

I used an extension cord to plug into various outlets throughout the house. Some GFCI, some three prong. I certainly believe that they are grounded properly and went so far as to check one of the non GFCIs to see if there was a ground wire attached. There was.