I have an ancient Unitiqute that I’ve had for many years but following failure of my laptop that contained my music library which was followed by failure of the display screen on the qute, I have a stupid question…if I plug my iPhone into the unit via the front fascia will I be able to listen in higher resolution using my phone as the player using amazon music HD rather than streaming from Spotify – hopefully that makes sense. This is as stop gap until I get my computer fixed.

Hi, that usb socket is for playing audio files that are on the internal storage of the iPod/iPhone device, and does not support streaming. 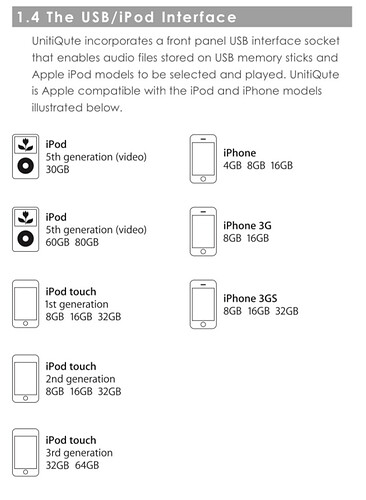 Exactly as Robert outlines. I’ve just been trying to do the same with my UQ2 - streaming Apple Music via an iPhone plugged into the front USB socket - the UQ2 sees and plays stored files that are only stored on the phone.

The USB input only officially supports iTunes/Apple Music through ‘Made for iPhone’ certification but you can usually coax it into playing from non-Apple apps too.

You can’t play an app into the uq/uq2 like that, through the usb. It can just access the internal folders and it’s able to read/play music files that are stored there. Same applies to both uq models.

“When a USB memory device or iPod is connected to the USB socket and the USB input is selected UnitiQute 2 will display the folder structure of the device. Use the up, down, left and ok/list keys to browse the folders and select the desired content. Press the play/pause key to play an audio file or the entire contents of a folder.”

I no longer have a 1st gen streamer but when I did I could use it to play from various apps such as Radio Paradise, Tidal, Apple Music etc. not just locally stored iTunes stuff.

The trick was to start playing a local file from iPod storage via the Naim app, but then just start playing any other app from the iPod screen itself … worked fine back in the day, as @ChrisSU says.

This forum never ceases to amaze me with the extremely useful practical knowledge the members share, a good read!

Thanks for all the feedback you lovely people! I’ve been able to do as @alan33 suggests by playing from locally stored files on the phone then switching to an alternative streaming service, in this case Amazon Music (much to my shame) which seems to do the trick. Not sure if its in any higher resolution than just streaming Spotify though…