This subject of music stores and backing up has been covered many times on this forum and in fact, I’ve been using my US for many years but my back up facility via my WD Mycloud gave up the ghost last week and have invested in a Synology NAS. I Have tried and died to set up a shared folder to back up. All of my iPads, Mac and other devices can see folder and others and whilst US picks up the NAS at a root level, it’s status is always offline and the backup folder underneath it never picks up! Any help whatsoever welcome please. Steve

You probably need to start/allow the SMB1 service in the NAS. The Unitiserve only speaks SMB1 and mostly modern PCs and NAS’s only use SMB2 and/or 3 by default. Apple products do still allow SMB1 though.

SMB1 is running on the NAS David…thank you. I’ve sat here all day trying to fix this without success! I’m currently getting this ‘ pinghost: socketexception The requested name is valid and was found in the database, but it does not have the correct associated data being resolved for’ which makes me think it’s got something in the folder.

What media server software do you have on the Synology ???
I ask as there was a permissions setup issue with Syn DSM-7 running Asset UPnP

After a long haul I think I found the issue, infact I’m pretty sure this was the issue. NTLMv1 is an authentication protocol and is disabled in DSM 7.0 for security concerns, and only NTLMv2 is supported by default. I found this after going through the NAS logs and saw this was failing during US login! If memory serves me correct I believe Unitiserve runs on a Microsoft XP framework, although I stand to be corrected.

Originally Synology said we’re deprecated NTLMv1, but it looks like a lot of media servers alike run on the old technology and there fore a tick box was introduced on the latest DSM 7 version.

Again I stand to be corrected, but you need to tick this box if you want to run Synology DSM7 with a NAIM Unitiserve. Once this was carried out within 5 mins all the shared folders appeared on the N-Serve app and I’m now backing up my US

Hi! Come and join us at Synology Community. A place to answer all your Synology questions. Ask a question or start a discussion now. 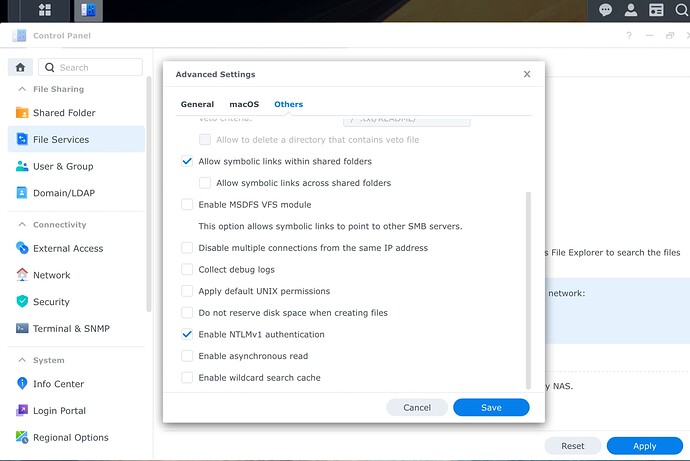 Very interesting. Yes Unitiserve (and the other old servers) use Windows XP Embedded. Glad you sorted it out.

Oh and another thing! This is applicable to SMB1 protocol and I believe that the UnitiServe uses this! It’s considered old technology now and will probably be harder to integrate into later HiFi systems as time goes by.