I used to do all downloads and transfer them to my Unitiserve via the windows explorer on my PC. The Unitiserve used to show up in the “Network” section and I’d simply move downloads across into the Unitiserve that way.

Now I have a new laptop (work) and for some reason the windows explorer will not reveal the Unitiserve under the Network tab even though when I click on Network I can see the NSSRV…… in the list of “Devices”.

So as an alternative I tried to do it via an Apple iMac I have and here I can download it and try to move it to the Unitiserve (which it located in Finder) but here it won’t let me move the file into Downloads because I need to enter my Unitiserve Username and Password.

On my old PC this was recognised as my log into credentials as I used to get into the PC but for the Mac it won’t accept that.

Is there any way I can find out what my Username and Password is to log in as a registered user on the Unitiserve? Where would I find that information?

Have you tried entering nothing as username and nothing as password? So just press enter when you get the dialog asking for the credentials. 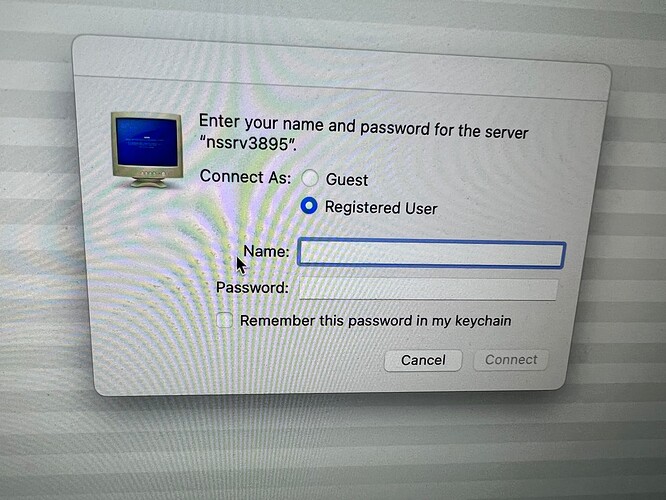 Not sure why that doesn’t work. The other angle to look at is making sure SMB1 is enabled on your new windows laptop. I think it can be a real struggle with windows 11 though.

Thanks David and Chris. Strange as I always had to enter my username and pw to access the Unitiserve via Windows explorer on my old PC. As I said those credentials were just the same as I used generally to access things on that PC so maybe it was a consequence of my work security set up or something. I’ll keep trying!

You can try going in as guest.

Otherwise pic up an old laptop I have an old dell you can have it’s like super old with FireWire on it 2011 I think, but you can turn on smb1 on that which is what is preventing you on your new laptop.

Or get rid of the serve it’s beyond geriatric in pc terms and at the end of the day that’s what it is a pc.

You’ve probably already tried it, but in the network address bar of files explorer (not internet explorer) on your PC laptop maybe \ \ NSRRV3895 without any spaces

that jogged my memory to say when it prompts for the username put nothing and in the password put a forward slash.

Thanks Ewen and Gary. I eventually managed to get the files into the download folder in the Guest mode but it’s great to know these ideals going forward.

Not sure if you have roped music but if it’s wav I would suggest converting to flac now. It will future proof you.

Thanks Gary. I do have 100% WAV as that’s what Jason recommended as sounding best. I think I do need to convert it all to FLAC as I’ll probably move to a Core or similar before long. I’m not clear how one does that conversion on the Unitiserve although I’m sure I can find out via a forum search. Thanks again Dave

If you convert to FLAC now, which I agree is a wise move although probably unnecessary with a Core, you can set the Unitiserve to convert back to WAV on playback. Then you can have your cake and eat it: you get the reduced file size and versatility of FLAC in storage, but your streamer still gets WAV.

Thanks Chris. That sounds great although I must confess I really can not hear any difference between FLAC and WAV. I think the Unitiserve is rather good. It’s been reliable for me since 2015 and it’s feature set seems more extensive than the Core!

I found the difference between FLAC and WAV on 1st gen streamers to be very small, so if you’re happy with FLAC you don’t have to convert it on playback. The Core cannot do it, so you have to make your choice when ripping.