That’s great Chris, so like it is on Windows. Just to be clear for Keith, by transcode your mean convert of course.

Ah, yes. If I highlight an album or albums and right click then I can encode to FLAC. As a rest, I’ve tried it on Big Star #1 Record.

Yes, convert and I can confirm the Big Star album was successfully converted.

It you select Albums from the list on the L it will transcode all of them in one go. If you have a large library that will take a while so I would suggest maybe doing one genre at a time just in case it stalls… 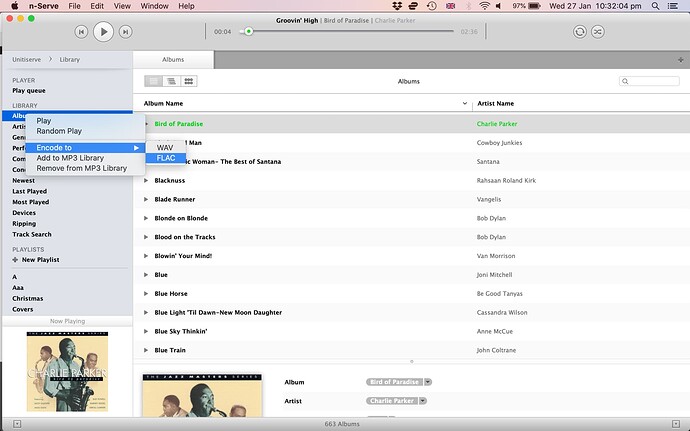 That’s great. Now just go to the top of the tree and set it running. The tree will simply have folders or artists below so there isn’t really an option to do it by chunks. You can monitor progress via one of the options somewhere. It’s years since I did it.

Yes, I remember your damascene conversation to FLAC and I seem to have reached the same place

I have upgraded to a Audiostore Prestige server, primarily as Roon core and to Roonify my NDS. I want to redo my collection so it gives me more flexibility, going forward.

I wonder which version of FLAC it does. Uncompressed?

A couple of other things to consider:
The above process only transcodes CD rips. If you have any WAVs in the Downloads folder you can use any non-Naim converter to transcode, although if they are not Naim rips you probably don’t need to bother.

As you have a 1st gen Naim streamer you may want to use WAV for best sound quality. So having transcoded everything to FLAC, you can set the US to transcode back to WAV ‘on the fly’ using this setting: 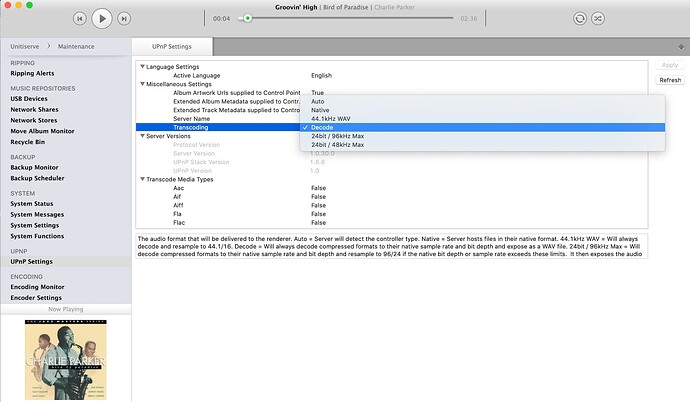 To ensure that any future CD rips are also saved as FLAC do this: 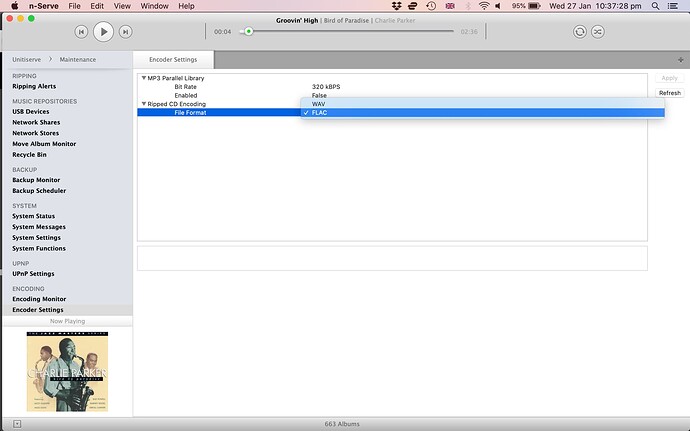 Yes, I have always had the Unitiserve set to transcode on the fly. It always amazes me that the Naim Core can’t do this.

I have ye olde Unitiserve with a Readynas Duo for hi res and other rips. The latter is in desperate need of retirement so I plan to reorganise my files and put them on my new Prestige 3, which can also do flac rips. The Prestige is replacing an cheaper Audiostore server used for Roon Core and endpoint.

Chris, in most cases when you say transcode you mean convert. The former is not permanent, whereas the latter is. Anyone reading this who doesn’t know the difference will get very confused.

Trancoding means converting one fomat to another, such as WAV to FLAC. I think perhaps you have abbreviated the term ‘transcoding on the fly’ to just ‘transcoding’ but this is not the only form of transcoding.

Chris is of course right. The term transcode is technically correct in this usage but I agree that most people wouldn’t be confused if one used the term convert.

Fair enough, though it seems to be generally used on here as I suggest. Transcode on the fly, or convert to from one format to another as a permanent change, subject to being able to covert back again of course.

It’s the thorny question of WAV verses FLAC sound quality. Many have said that it doesn’t or shouldn’t make any difference to sound quality, but I remember that Naim made a big thing of it back in the day. In fact, I attended a Naim session at the Bristol Show where they invited us to compare rips. The WAV rip sounded much better which then led attendees to ask if there is/was something different about Naim streamers to cause such a difference. Do forum members think there is an issue with the older streamers that has been resolved with the current products? I know the Unitiserve can transcode on the fly, and I think that the same might be true of Roon via the Sonore Bridge and perhaps MinimServer too? I also recall that the likes of @anon4489532 where happy to stream FLAC to their legacy streamers.

Hello Keith. When I had a SuperUniti and then a 272, I stored the files in Flac but always had my upnp server set to transcode to WAV. To me it sounded nicer and more natural. The reason is believed to be that it gave the streamer less work to do when it unpacked the files. The new streamers have much more powerful processing powers and therefore this is less of an issue. Since getting my NDX2 I still have the files transcoded to WAV, simply because I can’t be bothered to try the options. The general view seems to be that the format makes little if any difference.

I found a subtle but clear improvement using WAV rather than FLAC with Unitiserve and NDX. With NDX2 I’m pretty certain that I can’t tell the difference.
With Roon it becomes irrelevant as the Roon Core will unpack the file and give you a straight PCM stream regardless of whether it was stored as FLAC or WAV.
Minimserver and Asset can also be set to transcode ‘on the fly’ if you prefer.

This is as I thought. FLAC does sound worse on the legacy streamers, unless it’s transcoded upstream. I’m toying with tidying retiring the Unitiserve and replacing with my new Audiostore Prestige 3. Roon is the primary method of playback and WAV/FLAC should make no difference here as Roon transcodes everything. The Prestige also has MinimServer which will struggle to present Naim rips in acceptable way so the obvious solution is to convert to FLAC on the Unitiserve, tidy up the file structure and set MinimServer to transcode on the fly which I think it can do.

When I had Minim it was necessary to install extra software - I think it was called MinimStreamer - to do the transcode. That may be different these days. I found Minim a bit of a pain and swapped to Asset, which is much easier to manage.

I’m not sure if the Prestige has Minimstreamer so I will precede with caution. It looks like the Unitiserve will convert back to WAV so perhaps the move to FLAC isn’t as scary as I thought.

My other motivation for fiddling with my files is that my hi res files are on an ancient Readynas Duo which is seen as a share by the Unitiserve (which is the older version lacking the download folder). It still works and also acts as a backup, but the browser interface no longer works on the Mac.

You can still access the browser interface using this workaround:

Morning Gents, Fear not as the mighty Unitiserve and derivs will continue to work. To access the web interface after Flash is blocked in modern browsers is: Download the “Adobe Flash Projector” exe. See: https://www.adobe.com/support/flashplayer/debug_downloads.html Launch the app and go to file->open. If your server is at IP address 192.168.0.61 then type in http://192.168.0.61/TV.swf The web UI will then show, all independent of any web browser. Screenshot attached of the above in …