I changed the network name of my Synology NAS from “DiskStation” to “DiskStation1”, because I bought a second disk station (“DiskStation2”).

Of course, my UnityServeSSD does not find it anymore, but I cannot change the address of the Music Store in the US … it only allows me to change user name and password for that user.

However, I can create a new Music Store, but the US warns me in capital letters to make the Music Store is EMPTY … probably because it will erase everything …

So, how do I get access to my Music Store with several hundreds of CDs? 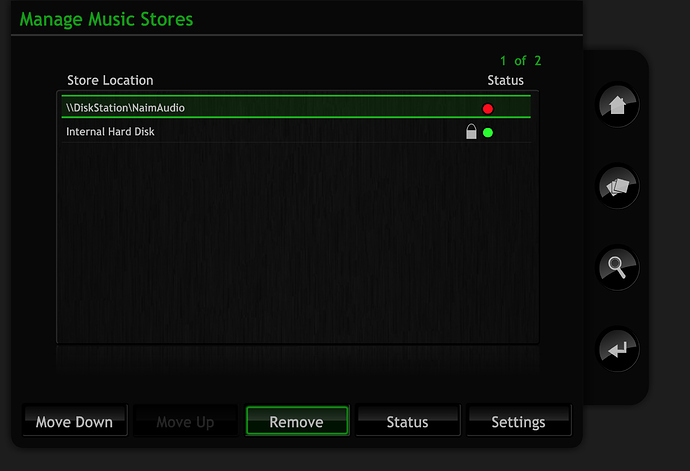 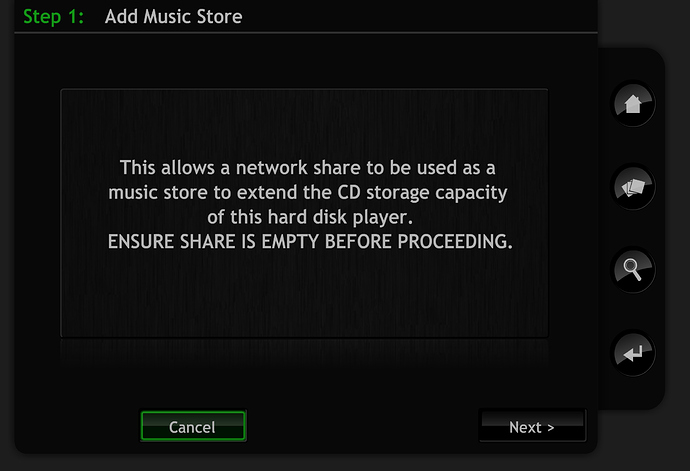 Hi, the Music Store will not have its content deleted, it just will not be ‘promoted’ from network share to music store status.
The easiest solution might be to revert to the original name, as it will still be distinguishable from Music Store 2.

Thanks, but is that not a pretty big functionality-flaw that the NAS name cannot be changed?

My NAS is used for many other things in a network of several NAS, so it is a pretty hard restriction that I am “not allowed” to change its network name.

It there really no other way around this? It should be a simple parameter setting somewhere …

There may be a simple solution, but I can’t think if anything off hand. There are a few people at Naim who are familiar with the old servers, so they may have some ideas.

For future reference, just ignore the “ensure empty” warning & continue to promote to music store status. Nothing will be lost, the US will automatically rebuild its database around the existing content.

I would have guessed that promoting a network share that’s not empty to music store status would simply fail with no explanation given, as that it what happens when you make one into a backup location, causing many people to get confused. Good to know that it works.

Good to hear you’ve got it working, Michael.

Yes, I think it must be generic message. When you create a music store it drops a control.ini file into the location. I imagine it does the same when you create a backup.

We use a NAS at HQ for testing ripping with SSD units, we never remove the .ini file & when promoting the store, after the “ensure empty” prompt, it goes on to say - this store is currently owned by someone else, would you like to take over ownership? (or words to that effect).

I didn’t get any error messages and it works, so apparently it is the way to go.

We only get the “owned by someone else” message because the .ini file contains the ident of the server in control of the share. We are pointing multiple units at the same share consecutively.

Niel,
It appears that when I promote the share (which is created from the old store) to a new store it just takes over the control.ini file, which is left unchanged - not even the time stamp is touched. Just checked.

I would think that is because it contains the same ident from the original owner.
Nothing to worry about, as long as it works!

But you have successfully promoted the populated folder to a music store?
Has the status dot next to the store turned from yellow to green?

Yes, correct.
See snapshots below, the first one is the old store and the second is the result of the new.

Indeed, only the network location, share name, permissions and ownership are important to the UnitiServe.

So pleased it is working for you.