I have a NAIM NAIT 5i amplifier and Rega RS5 speakers. My old NAD CD player has finally given up the ghost. I’m interested to know which used NAIM CD player you would recommend ?

I’ve been looking at the Naim CD5 series but am getting a bit lost regarding the different models.

The CD5i would be the most obvious match for the NAIT 5i. Secondhand ones are fairly easily available. Several very respected UK Naim dealers have a nice line in s/h offerings.

When you say ‘the different models’, if you mean the various CD5xxx ones, from the end user’s point of view, there’s nothing terribly significant to choose between a CD5i, a CD5i or a CD5si: functionality, looks and even price are all fairly similar. Just be aware that the CD5i (with the i in italics) is often called a CD5i-2, or even a CD5i Mk2) since just changing the font of a single letter in a component’s name is not the most helpful thing Naim could have done when naming their upgraded versions. Who’d have thought Naim wouldn’t be very good at naming things, eh? (I’m here all week).

Once you’re talking about other Naim CD players, there are significant differences, but those players would, arguably, not match as well with a NAIT 5i.

CD5i is a great partner with the Nait 5i, as you might expect. I would probably look for a an italic i over the original as it’s a good deal more refined, or even an iS. Otherwise, moving up the range there’s the original CD5, which can also be upgraded with a Flatcap power supply. I’m very fond of this player, although its getting in years and stocks of the VAM1205 mech may not be available from Naim for much longer. And then there’s the CD5x, which is a big jump up in sophistication, uses the Burr Brown PCM1704K DAC chipset and PMD200 HDCD filter. The mech is the VAM1202 so spares are still good.

And what could be the choice on a NAC202 NAP200 combination?

@BigJim I can easily recommend the CD5XS if you wanted to take it up a notch from the 5i range. I’ve been very happy with mine.

Thanks I will look out for these options.

CD5X is so nice, I’m keeping mine for the sad day when my CD2 mech dies (it may outlast me, lol)…or I finally get round to a definitive shootout/clear winner between them…as ever when I plan a comparison, this may take awhile!

I’ve been looking at the Naim CD5 series but am getting a bit lost regarding the different models. 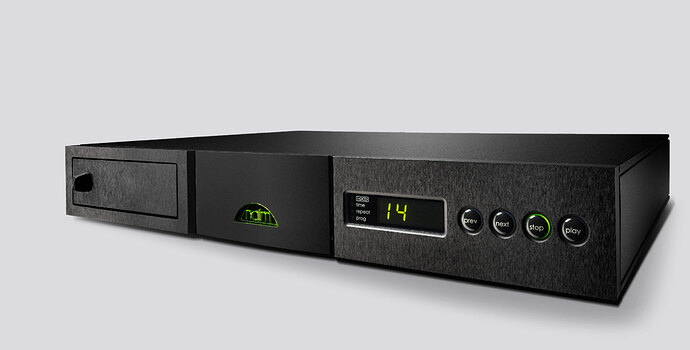 Agree. CD5XS has a digital output, so you can add a nDAC to take it to a high level if funds allow. But it’s a fine standalone player.

CDX2 but if can’t locate a good one probably CD5XS/nDAC combination - as good as stand alone CDX2 I would think . nDAC really good value these days

My CDI transport packed in a few months ago…loved that CDI but eventually I replaced it with a CDX2 and really liking that a lot.
And I’m really looking forward to the time when I upgrade it with an XPS …I’m hoping for a magnitude jump in SQ.

I started with the bare CD5XS which was very enjoyable . I then added the nDAC and that was a very significant improvement in SQ, bringing it to the CDX2 level

The icing on the cake was adding an XPS-2 , another big improvement .

Can’t see me moving to streaming yet unless I get a huge jump in SQ going that way , after all that’s what it’s about

I really have fond memories of the CDX2 and XPS-2 combo. Strangely, I feel the CD5XS or XS2, which I once owned both, are Naim’s really sweet-spot player(s). I owned the XS2 and HiCap combo for likely the longest and loved its presentation: fast, detailed and fun. I get the feeling, though, that any of these are likely not what you’re looking to spend money on. Given your amp, the 5i is a great recommend.

I ran that front end for several years into SN1/HCDR. Then added a MacMini via optical into the nDAC which got me into streaming. Eventually a 272/250 beckoned, but the CD5XS combo was definitely a sweet spot.

Yep agree PeakMan, I’ll keep it until it explodes!

In another life I’ve owned the CDS3 and CD555 and of course they were better , but there is just something about the CD5XS, it’s such a fun and insightful player

I wouldn’t buy a Naim CD player new or used now. When their transports fail and they can’t be repaired any longer, you’re left with a very expensive boat anchor.

When their transports fail and they can’t be repaired any longer, you’re left with a very expensive boat anchor.

This is only the case for some models, not all - for now, admittedly.

“For now” being the operative words.