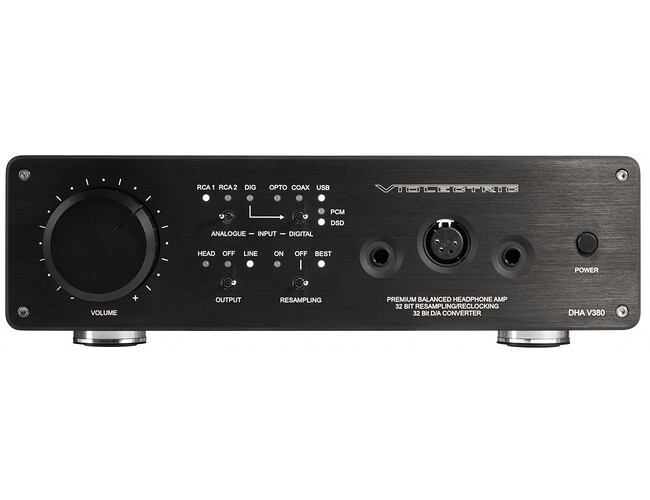 violectric-dha-v380-headphone-amplifier1300×1000 140 KB
So as a newbie to headphone listening I thought I’d share my early impressions of this new headphone amp from Violectric, they of the revered V281. I seriously considered the V281 but as it was being phased out in favour of this, I decided to jump into the new version, especially as the DAC in this is slightly more in line with the quality of the amplification.

I have a decent system to drive my speakers, so wanted this for headphone duties by itself - it doesn’t have to act as a pre-amp to any speakers. However, I did want an amp hat could be fed from my dCS Rossini DAC, as well as being able to run stand-alone by using the built-in DAC.

Headphones are nothing exceptional - Meze 99 Classic, Sennheiser 650’s, Grado SR325e’s. The Meze’s are my favourite, with the Sennheiser next (though they are reasonably new and much less comfortable) and the Grado’s may be being returned as hey just don’t add anything to the party. But this is not a headphone review.

For comparison, I’ve used a Topping DX3 Pro, and an RME ADI-2 DAC headphone amp (about £250 and £900 respectively), and for all have run them from a Raspberry Pi 4 via optical connector or USB, with Roon. Note too that the RME has also been returned as it was better, but not much better, than the DX3 Pro which is a great small box for the money. The Violectric is closer to £2k so should be better.

First impressions: it’s a solidly built bit of tech, slightly more modern in looks than the V281 and with more discrete white leds. It still has an old-school vibe with three way silver toggle switches on the front panel, and is not full width - it’s about ¾.

I’ve been playing music from Katie Melua, Fleetwood Mac, Faithless, Pink Floyd, Dido, Snow Patrol, Neil Young and others for the past few hours - tellingly, I’ve been mostly listening to the music, not analysing the hi-fi experience, which for me is a good sign. Decent systems offer a clarity and transparency and immediacy that is more relaxing to listen to, I find, and whilst it’s hard to put a finger on why it is, it is usually apparent pretty quickly. It was with this.

Characterwise, it’s like being in a warm down jacket in a snowy landscape: there is crispness and clarity across the music horizon, but doesn’t leave you feeling cold and sterile - there is enough warmth in the sound that enfolds you as you listen to details. There is no harshness in the upper ranges, and bass is tight and controlled and rhythmic - there is a strong Naim character to the sound, I think. In fact, the more I listen, the sibilance control without loss of detail is great. And there’s no lack of bass.

I’ll add to this as I explore it more and let it settle in. Put it like this - I’ve had it in its box, unopened, for a while as I’d been disappointed with the RME despite its good reviews, and wasn’t expecting miracles with this, and it’s a lot to spend on a listening mode I am not an aficionado of. After a few hours I know it’s going to stay and I am already working out how easy it will be to move between the hifi room and the office as I’ll want to use it in there when working.

Congratulations on your new amp. I know you will like it.

Looks very nice I do like Violectric but above my bracket currently. From what I have read up, the DAC is on par with the RME and others it’s the head amp stage where this beats the competition which is to be expected it’s what Lake People excel at. And for over 1k more you would expect a nice bump. Is this available just as a headamp as if I am upgrading I only want to change the amplification stage! I don’t want an integrated dac.

The new 550 is the direct replacement for the 281, and the 590 (550 with dac) replacement for the 281 with built in dac.
This one replaces the 280, still great, but its a shame it doesn’t have the balanced inputs of the 281, as you could run this direct from the unused balanced out on the rossini, as you will be using the rca at the moment to link to the 552, like i do.
I found as have a few others that doing it like this and bypassing the 552 sounds better

But these headphone amps are all great quality and sound fantastic, loads of power to run anything you want

I was using Chord Sarum T RCAs out of my ND555 into a V281. I replaced it with a Teddy P. DIN to RCA from A/V out of my 552 and I can’t tell the difference. The Sarum cost almost 14 times as much.
I expect that if I was using a DIN to RCA out of the 555 I’d hear a difference.
One thing I learned is that using a single output out of the 555 sounds significantly better. I found this out accidentally. It took me a while to realize what it was.

Dont know about the nd555, i was talking about direct from the rossini, the rossini has balanced xlr’s and RCA’s, they can both be used at the same time, as they are 100% separate and so not a problem or sound loss in using both at the same time.
Running as i said is certainly an improvement, removing the 552 out the chain

yes current plan is to use the balanced outputs and convert them to rca so I can keep the standard connections into the main system and run the headphone amp alongside. Not as ideal as balanced-balanced, but an acceptable compromise for the ££

£1400 is what I paid for it (plus VAT) - the 590 was a bit too far above my budget for (really) better connectivity (which I don’t really need, except balanced XLR would have been good.)

Seems to be down or they went bust. Link is dead.

Dont know about the nd555, i was talking about direct from the rossini, the rossini has balanced xlr’s and RCA’s, they can both be used at the same time, as they are 100% separate and so not a problem or sound loss in using both at the same time.
Running as i said is certainly an improvement, removing the 552 out the chain

The ND555 has both DIN and RCA outputs. They can be turned off and on independently. Some feel that it sounds better using DIN only. I feel the same so I bought a DIN OUT to RCA and use it to connect A/V out of my NAC 552 to the V281.
This produces the best sound in my system. My Naim dealer told me if I wasn’t using a Chord Music between the 555 and 552, the V281 wouldn’t sound as good.

I have a fairly (semi) extensive headphone setup and enjoy listening to it. Dynamic headphones are Utopias, Sony Signature Z1R, and Grado RS1’s. I also run a totl Stax system with 009S and 80th anniversary L300LE headphones.

I have had a few headphone amplifiers run through these parts. The one keeper is the HeadAmp GSX Mini. I have a Moon 430HA which has been a disappointment (especially considering how well lauded it has been). The Benchmark HPA4 resided here for a month and while it was pleasant it ultimately went back. One of the last V281’s sat here for a month and while I really liked it - at the end the GSX Mini prevailed and the Violectric went back.

The new V550, the DAC less replacement for the V281, is sitting at the UPS shipping facility and will be delivered to me on Monday. I already have EXTREMELY high hopes for it as the importer told me that my main concern was a known performance parameter that Violectric wanted to address. Now with your review of the V380 I am starting to get goosebumps with anticipation of its performance. I am now expecting big things.

I will test it out primarily with my Linn Klimax DS as that is now relegated to being the source in my standalone headphone system. If it passes muster there I will try it with my Rossini/Master Clock which resides in the big 500 system. At present my Stax system resides there and uses the Rossini as its source.

Both @magicbus and I did some testing - me with the KDS and Rossini and him with a ND555, DAVE, and KDSM - and both of us have come to the conclusion that our headphone amps are better served connected directly to our sources rather than going through my 552 and his 52. Even though I was using a Chord Signature Tuned Array cable between my sources and 552 I still found the headphone amps performed best directly from the source.

More to report once the V550 lands.

Good luck with it - it’s supposed to be very good. My plan is to run it from the ~Rossini directly if I have it in the main listening room, as I also think it’s likely to be better than going via the preamp. But having the onboard DAC means I can run it independently as well and, as I can usually use the speakers in the main room if I want to, it may find usage like that. The flexibility is great.

It’s back to being 2k so that’s one for another time.

Keen to hear what happened to the V550. Did it arrive as expected? If so, any verdict as yet on how it compares to the V281 etc?