Last September we agreed a fixed price Virgin contract - no increases until February 22, £42.50 a month. Today we got an email saying that it would be £46 per month from 1 April. Obviously that’s not consistent with a fixed price, so it was a case of getting on the phone. Of course I got the message about extended wait times of up to an hour but lo and behold I was through in under a minute.

I explained the issue and said I thought they were just trying it on and I wanted to stay at £42.50 until next February. The nice lady I spoke to wasn’t able to deal with it so put me through to another team. After another couple of minutes I got through to another equally nice lady, explained it all again and she confirmed that Virgin were indeed trying it on and that my price was fixed, and would not be increasing. I explained that it was a bit of a waste of my time and hers having to make the call and that Virgin really shouldn’t try to increase the price of fixed contracts, and thanked her for her help, thinking that was that.

What happened next was a bit of a surprise. She said she’d reduce the monthly charge to £38, and fix it until September 2022. Was I happy with that, she asked. Of course, I say, thank you very much.

Anyway, if anyone is on a fixed price contract and Virgin try to increase it, don’t accept it and give them a call. My dealings with Virgin are usually somewhat tortuous but today their customer service could not be faulted. Maybe the stars were aligned. Maybe it’s because I was blissed out after my yoga class. All very unexpected.

I thought Virgin had increased my price this month then I remembered I’d asked for the DD to be moved forward a few days. The increase was commensurate with the adjustment.

Gosh you are patient…it’s my worse nightmare trying to call them, the wonderful wife normally steps in as steam is coming out of my ears…
Good result Nigel👍

God works in mysterious ways. Maybe it’s reward for all the work you’re doing at the jabbing centre.

In November I agreed a price of £44/m for my Virgin Media services, they actually wanted £83/m. However, when I received the 18 month contract, the cost was £39/m, it stated that I was given £44/m discount.
I am now paying £43/m due to the increase. I did phone up to complain twice but got fed up waiting and gave up. I might try again.

I once got a ridiculously low cost deal from Virgin, it was a Sunday afternoon and I’m convinced the girl who gave me the deal was drunk.

From my own experience the Virgin customer service approach seems to be to try and get away with it but if they are caught and challenged on it then they look to recover very well and quickly by throwing reductions and/or free stuff at you. An interesting business model - presumably the amount they win by ripping unwitting people off outweighs the give aways to the more aware and prepared to complain customers.

Yes, it’s an odd way of doing things. I really do feel for the people on the end of the phone, who work for a very modest wage and get lots of people being really horrible. These days I’m just really, really nice when I ring up to moan and I find it’s infinitely more effective than getting stroppy, and much nicer for the person on the phone. It was very strange to be offered a discount I hadn’t asked for.

That’s right. Five years ago I was paying £60/m. Every year they put up the price by a huge amount. Every year I threaten to leave and end up paying less than the previous year. In ten or 15 years I’ll be getting it for free.
Virgin mobile are the same. About four years ago they increased my monthly charge from £8 to £10. I phoned up and said I wanted to cancel as I didn’t want to pay that much. The lad on the phone said “how much do you want to pay”, I said “a fiver”, he said “OK we can do that”.

We’re on a Virgin Media fixed price deal, too … but reading those monthly premiums above makes me think we’re being ripped off! Of course, it depends on the package and for £55/mth (fixed until May 22 at which point it’s due to rise to £81/mth

We use the Tivo sparingly as I prefer the Humax system; and try never to use the Landline Mon-Fri due to the high call cost.

But I painted myself into a corner some years ago when I kicked BTelecom out due to their appallingly bad service (especially re: Open Reach) … I don’t want ever to use any service which requires Open Reach.

As for Virgin Mobile … never, ever again: after the lies and fraudulent practices I encountered, I reckon the 3 years I was under contract are some of the most stressful of my life!

But that’s another story …

I’ll take note of HH’s advice should VM seek an increase … and look to keeping a hold on any uplift in 13 months’ time.

We have the most basic TV package possible and only 100Mb broadband, which is more than fast enough for us, as well as Talk Weekends. We never use the landline - why would you when you can get unlimited minutes on the mobile? I was surprised by the example above of an £80+ package discounted to under £40. Still, I’m happy with our deal, which looks like decent value compared to alternatives. I had such trouble with BT in the past and really never want to deal with them again if it can possibly be avoided. They make Virgin look like a paragon of competence.

Hi @hungryhalibut, Sky have a similar approach to negotiation on pricing particularly if you let them know that you are thinking of leaving or have an issue with billing changes. Usually, they will offer all sorts of discounts just to keep a customer - and that is the important factor for them in the long run - customer retention = continued subscription.

I don’t have Sky TV, but they are my mobile and broadband provider. When I recently had issues with my home / area connection it was picked up by the app on my mobile (late afternoon) - and an engineer booking was offered for the next day (via the app)! He spent time checking and adjusting here, at my buildings connection box and at the box outside in the road. 2 hours later it was sorted and greatly improved with no issues since.

We lost our Virgin Media internet connection for 7 days at the start of this month. This turned out to be 3 days for scheduled work (with no prior warning, connection just went off when my wife was half way through a Sainsburys order for home delivery) then when it would not turn on again after completion another 4 days before the engineer could get to us. He could find nothing wrong with our installation but when he checked the street cabinet discovered that the guy doing the work had failed to re-connect the precious strand to our house. It was just left hanging there. For 4 days.

Needless to say we are now looking at alternatives and have been advised to consider Zen Internet, based in Manchester with real people answering the phones and no scripts, allegedly…

That’s bad, but there is also the issue of babies and bath water. Did you try asking for a number of free months, or money off? The trouble with changing companies is that they may be even worse. As I said, I couldn’t fault the people I spoke to at Virgin yesterday.

Did you try asking for a number of free months, or money off?

Hmm. Well that means trying to use their customer service without getting dangerously high blood pressure. Unlike you, who seem able to maintain saint-like levels of calm and reasonableness under such provocation my fuse is much shorter, especially when, after going through interminable menus, you get through to the always polite but for me mostly indecipherable south Asian accents of the distant help centre staff. I have my phone on speaker, and hearing aids in both ears, and try asking politely for the helper to speak more slowly so I can try to follow what they are telling me, but it seldom works for me. Even my wife, who is a much more reasonable personality and has very good hearing, finds it a trial.

This latest time I resorted to using their online complaints form but after spending many minutes composing my wording I finally hit the send button and got an error message, The algorithm had not retained any of the message wording for a further attempt. I gave up.

So we are at the point where even the flat nasal tones of a Mancunian would afford balm for the soul. “Paul Calf here. How are you today?”

And after 40 or more years with Virgin, or their predecessor companies here in Birmingham, our baby is so big it has grown up and left home.

I actually told virgin I wanted the basic TV package (plus sports Lite?), phone line and 100M broadband for £42, which is what Sky charge for an equivalent TV package. They agreed to that, but then said to save the time and effort changing the package I could keep the package I already had for £44. (maxit TV, 200M and phone). I ended up paying £39/m. 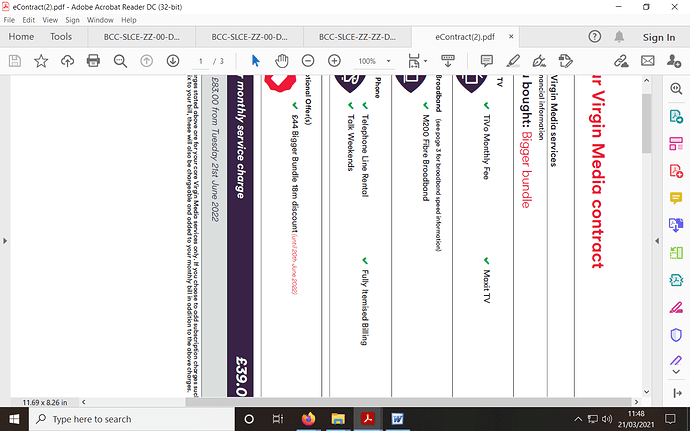 My neighbour phoned sky to cancel his package as he wanted to watch BT sport (he genuinely thought sky couldn’t do BT sport). The guy on the phone said they could do BT sport and they would add it to his package for free). If he phone sky and asked for BT sport, they would have charged him an extra £15/m.

How many MBs do we actually need I wonder? Two old fogeys occasionally watching Iplayer streams in separate rooms on ‘standard’ hd tvs. No uploading big files, no downloading 4k videos. On that basis we should be able to find a deal where they pay us.

You have my sympathy! I was delighted to be able to speak to a friendly northerner yesterday. I too have hearing aids and some accents can be difficult. The way I cope is to constantly remind myself that none of the problems are down to the person I’m actually speaking to. Doing yoga beforehand definitely helped.

That does seem a bit steep.

I suspect you are funding my discount.

You really have to haggle with them, when they said mine was going up £3.50 and my discount loyalties were coming to end it would’ve gone up about £26. When i told them to remove the Tivo and the phone landline there was not much of a reduction so i gave them notice that i was leaving them. A couple of days they got a bloke to phone where it’s his job to make sure i stay with them, it was only then they gave me a good deal and he gave me even more channels on the Tivo.

The Sky Broadband Engineers that have visited here are actually BT Open Reach employees and my landline charges are paid to Sky but I believe BT own the network. My current average broadband speed is 80+ MB’s which is quick enough for all my connected devices - downloads or uploads. I don’t use a music streamer but have no issues with connection to my Freeview HD Sony Smart TV to view Netflix, Youtube, iplayer etc and the picture / sound is excellent. My son pays for the Netflix (and now Disney+) and has me as a family member on each so they are both free.

Landline (with no phone plugged in just the latest Sky Router) and broadband costs £30 monthly.