What’s the best domestic router for sound quality, in your opinion?

At a do-able price, mind…

If using lan cables for connectivity I’d say everything is pretty much the same. If using wifi then some routers might have better wifi performance. Headline xxxmeg wifi figures don’t matter a fig; it’s how well the routers wifi can cope with multipath effects and weak signals. A good 150meg connection is a better than a rubbish 867meg one.

Aha. I’m cabled. Have to find something else to spend my cash on, then.

Unfortunately for you there are major sound differences between routers. ISP routers’ SMPSs’ are cheap and nasty and will degrade SQ. The $1.50 cables provided with routers will admit EMI right where you don’t want it. The transmitters are underpowered, the antennae poor quality. The firmware is often defective (Virgin Superhub3 switches in diagnostics when overloaded i.e right when you don’t want additional load), some share bandwidth, causing drop-outs. Wired connections are also not automatically superior to wi-fi if they pick up and transmit EMI and RFI into your digital system.

My suggestion would be to keep the ISP supplied router, as it will be configured, updated and supported by the ISP. If it has a poor PSU, maybe consider changing that, and try to keep it a good distance from the HiFi, and on a different mains circuit.
I do think it can be worth using your own LAN hardware, and it’s simple enough to disable the router’s built in WiFi and add your own access points.

My suggestion would be to keep the ISP supplied router, as it will be configured, updated and supported by the ISP

The router we got from the ISP is a cheap piece of you know what that connects at 3Mb less than the Billion router I bought myself to replace it. When the best we can get here is 17Mb with the Billion compared with 14Mb with the ISP router, that’s a big percentage difference and every little helps. ISP routers really are lowest common denominator stuff.

I assume you tested throughput?

Yes, ISP router connecting at 14Mb speedtests at about 12Mb whereas the Billion speedtests at around 14Mb with a 16/17Mb connection. This difference is also apparent with larger downloads in real world tests rather than speedtests.
That said, I bought the Billion with no regard to what if any difference it would make to music streaming. I’m not big in to streaming (yet?) but am mulling over the idea of an ND5 XS2. 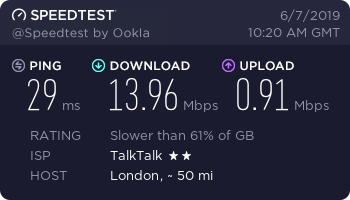 Apart from the first time I started streaming when my old BT HH3 heated to the point of plastic changing shape after 3 ripped CD’s - via ethernet NAS-Hub-NDX. This quickly spurred me into a switch & that did give better sound with both NAS & web streaming.
Outside of that I have never heard a sound quality change between broadband hubs & I’ve had the BT 3, 5 & 6 variants, Asus & Netgear. I now have BT HH6 & quite honestly it simply does the job & has no problems whatsoever. I certainly don’t recognise any of the problems mentioned in previous posts about ISP supplied broadband/wireless hubs. I get 68Mb/s or better on the 5GHz wireless band & the same on a wired ethernet connection. The 2.4GHz band is slower at aprx 55Mb/s.

I’m all ethernet via a switch with music so I guess this doesn’t count w.r.t. the OP question. However whilst downstairs TV is also ethernet, the bedroom is wireless & that seems to work with the web services. Music web streaming on NDX always has a 100% buffer, I’m not sure if this is indicative of hub performance, but like I said before, I’ve not heard a sound change between different hubs.

It could be that the ISP reduces the speed to improve stability, as running the connection at the highest possible line speed can cause issues. I’ve had problems in the past which turned out to be caused by the ISP trying to give me the maximum possible speed, and after discussing it with their support team, reducing the download speed slightly made the connection much more stable.

Yes I’m aware of such issues but the Billion just connects faster out of the box using default settings especially signal to noise margin. The Billion does give the ability to tweak the SNR to get a faster connection but that does of course come at the cost of a less stable connection. That’s something I haven’t really bothered with seeing as it is very stable at 16/17Mb

As I understand it, some routers aren’t very good at the switchy stuff, which why adding a switch can improve quality. We have our Virgin hub in modem mode. It’s a bit rubbish and is huge and ugly, so is hidden away. We use an outdated Apple AirPort Extreme, working with a wired Express upstairs to give solid WiFi all over the house and in the garden. It works really well.

I’ve used many routers over the years none have ever effected sq. Some have been ISP supplied and others I bought my self most domestic ones I have found to be awful and unreliable. I have tried ones for Linksys, Netgear, Cisco and Apple and they are all have their own issues in one way or another. Now I use the ISP supplied router in modem mode , Ubiquiti Unifiy Router which has only two ports but does not act as a switch as one is for a separate network and seperate switches and WiFi access points. It’s more kit but allows me to get stuff thats better at its job than an all in one solution. It works brilliantly, but requires some time and knowledge to get configured optimally and is rock solid. Did it change sq, no but it’s fast and stable.

I’ve used many routers over the years none have ever effected sq.

I have to admit that despite all the threads in here about switches, network cables and so on making noticeable differences to sq I can’t really get my head round how that should be so. The way I see it, as long as your local network is delivering a stream of bits to the network player without losing any packets, it is then up to the network player to make sense of that stream of bits and present it as music. Is there any science behind a switch improving sq for example? What am I not getting?

If your streamer and NAS connect to a separate switch then traffic will not go through the router. If you use iRadio, Apple Music, Amazon Unlimited, Spotify, Tidal etc., it will to get to the big bad Internet and then who knows what it goes through … but as long as your ISP router is not dropping packets it’ll be fine. If it is dropping packets you’ll hear gaps in replay. Most ISP routers are fine. I watch Sky Sports through mine (DLink) with no issues so music streams are no problem.

NetGear makes nice switches where you can turn off all the annoying flashing lights. So that might be useful, it’s cable management system is good for proper (not audiophile) Cat 5e cables.

No one really knows that’s why it all seems to be guess work or supposition and no outright facts or evidence other than anecdotal evidence. Most on hear claim vigilantly that the Cisco 2960 switch improved sq. I tried them and heard no change that I could hear. I tried an AudioQuest Diamond Ethernet it made very little discernable difference to the Blue Jeans certified cat5e cable that was 10x less. In the end we all seem to hear or not hear differences. Whether any are actually real or in ours heads is up for debate. The rule is if it works and improves things for you then fine if it doesn’t it’s also fine. Some claim my system isn’t resolving enough that’s why I don’t hear the difference, I don’t buy into any of this resolving lark, as other people with the same unit as me claim it does make a difference. Who’s right or wrong?

Blue Jeans Cable Ethernet cables are simply better than AudioQuest (Vodka) ones. This assertion is based on Fluke testing both cables. There is an explanation here of Fluke testing - please tap

People hear what they hear and no doubt there will be advocates of audiophile stuff, but I find it strange folk used to deride Peter Belt’s products, but maintain routers, switches and data cables have magic properties. Personally, I think an air purifier will do more for the listening environment than boutique network kit and wires.

Just my opinion, of course.