Who here is Naim's most contented customer?

By their nature, I suspect forums are for the most uber-committed. So there may be Naim owners whom we will never know about, who have had their sets for ages and are happy.

But here on the forum, who has had their unchanged Naim set the longest? Who is happy to have kept what they bought and have and resisted new ranges. Myself only a couple of years, no time at all!

Well, happy and content since the late 1980’s when all the components of my system were assembled in the system that remained unchanged and is the current system.

The system was changed a bit to get to where it ended, but that maybe is something for another conversation called “the development of my hifi system over the years.”

The system I have was mostly determined by available funds in the first place, and domestic constraints. It has survived without mishap two children growing up and the room by necessity was used as the living room and playroom.

Apologies that the photo is one that may have appeared on other conversations, but with a system that has never changed, it will always look the same… 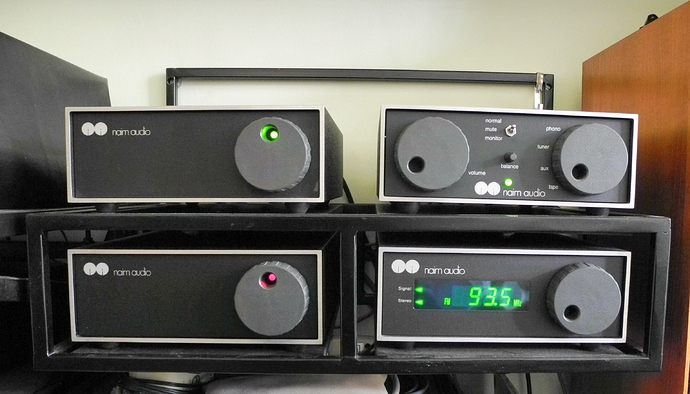 I have resisted change mostly because I could not have afforded it, and there is no room to use another location for dedicated listening room, and we have never moved house.

I have remained “uber-committed” over the years, and dipped into the Naim forum over the years it has been available, making odd contributions recently. Once the Naim sound is what appeals, you have to have deep pockets to keep up!

But there are people here who’ve had items in continuous use three times as long as that.

Would you change it if you won the lottery?

Only 1988 here with SBLs and some big Exposure amps. Went Olive soon after then black 2003/4. My fave Naim look is CB though…

I confess, I have an itchy feeling all the time. Happy to applaud for someone else.

But no doubt about my SBLs and IBLs! They outclass many, if not all, of the modern offerings which are in my price range and would fit in my livingroom.

I have wondered that myself: first I must declare that I have never purchased a lottery ticket.

However if money were no object, I would have to have a bigger room to put any larger system into (current room 4.1 x 3.2 x 2.5 high) and that would allow the speakers a little more room. (Speakers are squashed either side of the chimney breast). If I was rebuilding the system into a larger room in another house I am not sure I would change. I think the look of the ‘chrome bumper’, particularly the small format (shoebox size) has not been improved by the change to ‘Olive’ or by the change to the ‘classic series’ black or even the new (latest) series. If I were to change, I would loose the looks.

I have been following the forum more closely since it changed, really only because I have more time to spend, but even in the intervening years I never lost contact with the changes in Naim, as well as the hifi world. Only retirement has offered some time to indulge in the forum.

I read the descriptions that follow each change that forum folk make, and I wonder what they hear that I miss. I like the Quad statement “The closest approach to the original sound”, and I auditioned a Quad in the 1980’s alongside the Naim, and I picked the Naim (I think all the amplifiers I auditioned were about the same price range). I wonder what else there is in the newer amplifiers that will make a significant change, without developing a bespoke listening room, and changing source and loudspeakers, which is what Alastair Robertson-Aikman did for his enjoyment of opera records played on his SME turntables. I think I would take his example as a starting point if money were no object.

no doubt about my SBLs and IBLs!

Nope, different systems. But since I have an AV2, I’ll try it for sure somewhere in the future.

Although my system has been through a journey of considerable change over the last few years it was always with the goal to ‘“get back to where I was” in the late 80’s. I think I’m pretty much there now in essence but the big difference (cost aside) is information retrieval. I enjoy the music as much as ever at an emotional level but there’s far more there in terms of detail. That enhances my experience as the added nuance hasn’t come at the cost of lost musicality. I’d say the core to that is my enjoyment of the combination of Linn LP12 (old and new) and Isobariks in active guise with Naim amplification.

I became part of a system in a large room for the kids and parties - and the enjoyment in that space was amazing! But when I brought it in to compare against the modern, but modest main system (using modern speakers and source), the difference was marked: yes, today’s stuff has much better grip and detail.

That being said, I think the OP stuff has been kept in a much better state, and while not 1/4 as powerful, definitely a better starting point than the onkyo. And I will say this, the enjoyment we got from the “found” system, that got its source from a 50 bluetooth receiver was on par or greater than the main system

And from the sounds of it, the OP is very, very content with their system - which is the end point isn’t it!?!

On a different note, the OP will be familiar with my IBL ownership. They are my longest term items now at a mere 12 years. I don’t see myself ever being tempted to sell them even though they see very little use these days. I’m hanging on to them as part of the inheritance

. I wonder if there are many Inhereted systems out there being enjoyed?

Thanks for all the responses. I do admit that Haim with his slimline olives was in my mind when I posted.

It’s great to read of Naim owners out there, untroubled by the latest stuff. In a way, quite comforting, quite reassuring.

I think many of us compared Linn, Exposure, Quad, Linn et al years ago and made our choice. Once you are on this journey it becomes hard to jump off the bus. You better hope you made the right choice! I still believe I did but there is no way I could change my system now. It will ‘see me out’ as they say…

Agree, I went ‘off piste’ after selling Naim gear in 2014, but now back ‘on piste’ intend to build up a stonking Naim ensemble bit by bit …this is the place to get some very good advice.

Completely agree. I bought musical fidelity in the 80‘s and after 6 months it was rubbish so I moved to Naim.

I still have and enjoy my CDX2 from around 2005.
For me I’m most satisfied with the Naim 552 … absolutely world class, a true icon, and I very much like their current digital transports … they are very good.
I now use my 552 to directly drive non Naim actives… and the wonderful thing it still sounds like Naim with all the benefit of actives …

I do admit to bemusement when I read of posts on here where people aren’t satisfied having spent God knows what on high end, my NAIT3 NAP90 probably isn’t perfect but it puts a smile on my face every night but then it has been burned in for 15 years

If I won the Lottery? Uber groovy turntable and every darned record I never bought the first time

My Naim system comprising Naim CDi, NAC102, NAP180, SBL remained unchanged for around 21 years apart from the upgrade to a NAP250 and Hicap around 5 years in. I also have my original Naim Nait Series 1 from 1988 which was purchased during the summer before University driving Naim Intro’s in the study! Both systems gave me immense pleasure although I never did love the SBL’s as much as some people on here. They were always blindlingly fast and transparent sounding but never seemed to deliver what I would describe as a full bandwidth sound at the bass end. That was my only real complaint with the system and it did mean that there were some records I played that didn’t really satisfy as much as I hoped.

Last year after turning 50 I decided to try and push towards the level of system I had always dreamed of on the grounds that it would have to be financed by a loan and I only have so many years left with a working salary to pay for it! The NAC102 was supplanted by a NAC82, the SBL’s were replaced by ATC SCM40 passives and the Gyrodec gained both an SME IV and a Trichord Dino phono stage. I also replaced my Squeezebox Touch with an NDX.

I am now absolutely enthralled by the sound I’m hearing from my revamped system and haven’t played this much music since I was a student! Naim has been an absolute joy for me since I walked into a shop and first heard that Nait 1 back in 1988 and has delivered the soundtrack to my life in all its ups and downs. I just instinctively knew I had found my sound, the brand that delivers music the way I want to hear it and the way it sounds to me live and I’ve never doubted that choice.

I feel profoundly grateful for the pleasure I have enjoyed because Naim exists and am always conscious that even the most lowly Naim Nait based system is probably better than 95% of the hi-fi systems on the planet. Remembering that helps keep my own hi-fi lust in perspective!