Why are 9 Inch Tonearms standard?

Just about every tonearm that I see is a nominal 9" length, yet I have read that a nominal 12" length would be ideal (no sniggering at the back, chaps!).

Can any mechanical engineers out there say why? Would it mean that turntables and plinths would have to be significantly larger than we have got used to?

And am I imagining that I have seen a photograph of a longer than ‘standard’ Ittok or Ekos? Was that ever manufactured by Linn, or was it just a mock up?

Come to think of it, I think that someone posted a photo on this site recently of an over-sized ARO? Or have I imagined it too?

And here it is, next to its normal sized sibling. 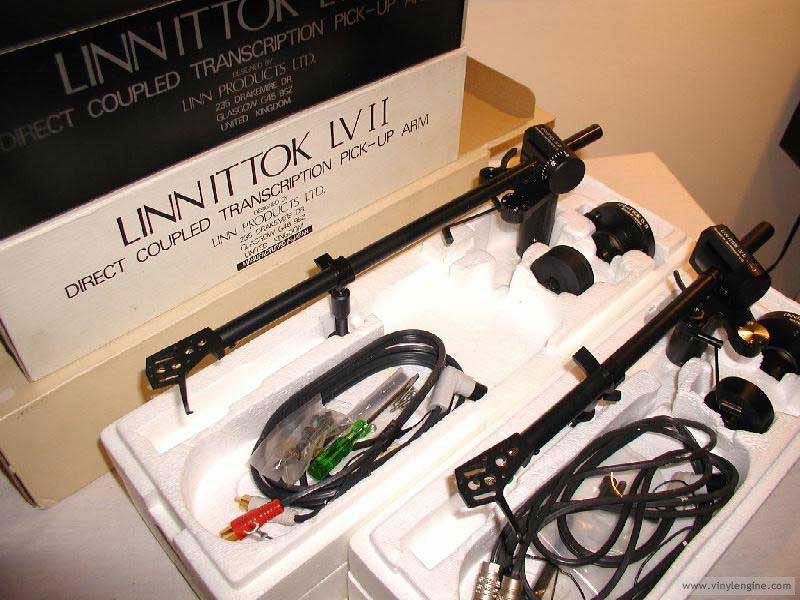 Thanks Nigel. I bet they’re like gold dust 2nd hand.

From my understanding, the 12 inch has better geometry, but it’s harder to provide rigidity, also more expensive. So I think as with many mechanical devices, it’s a bit of a compromise. Tangential tracking has been tried of course

Thank you for the ‘long Ittok’ photo, I didn’t imagine that one, at least.

But would would the proud owner do with such a beast? It’s far too long to fit on Linn’s own LP12 (unless someone’s going to tell me that Linn built a matching oversized Sondek to fit it to).

For professional radio use, a 16 inch Turntable was sometimes used - in order to play Transcription discs which were 16 inch.

A 12 inch arm was then needed.

Thank you, IRM, I have never heard of 16" turntables or discs. They must look seriously hardcore when in play. Someone should post some photos.

I wonder if Capital Radio had them in their studios when Julian Vereker produced the very first Naim amps?

Given that they are designed to play 12" records they have to reach the centre of the disk – so 6" is the minimum length possible. Add in extra length to reach the mounting on the record deck. So 9" is probably about as short as you can make an arm.

The longer you make an arm the less rigid it will be. However, in spite of a headshell offset, most pivoted arms will only be perfectly tangential to the groove in two places across a varying arc and a longer effective length arm will reduce the maximum distortion outside of those two tangential points.

In my experience of comparing similar arms of different lengths, the 12 inch versions tend to sound a little bit smoother but also softer too. As ever it’s a case of trade offs and best compromise.

I may have dreamt this but am I correct that 12" vinyl is <12" diameter? Where’s that tape measure got to!?

Presumably the larger deck or size for a mounting would make it impractical in many instances though? Or would it work on a standard deck size?

No idea. I assume it was intended for a standard size lp12 but could be wrong as I have no idea what I’m talking about. Just looking at a standard 9” there doesn’t appear to be enough room in the rest position for another 3” to put the lid on. Hopefully someone competent will post a picture of one installed.

Nearly all decks are designed to work with 9" arms, almost an industry standard?
Plus the domestic space needed to accomodate 12" arms may not be easy. They do look the part though.

This is just a guess, but I reckon its aesthetics as much as anything - record players evolved to fit traditionally on standard lounge furniture especially in the 50’s and 60’s when mass market products were becoming common - All my mid century furniture is about 350mm deep…

My guess is that it’s in the end a trade off. Rigidity vs less distortion. As neither length is inherently better, the nine inch is the obvious (commercial) choice. Cheaper to manufacturing, store, ship etc. And probably easier to sell as it means a smaller deck.

Don’t forget an S tonearm is designed to provide this extra length. But normally coupled with a removeable headshell so it is kind of hard to quantify any benefit because so many other variables change too.

Wait, what? I need to read up about that. I can’t immediately work out how that works if the effective length is the same as a 9" arm?

That just is not, and could not, be right!

Turntables and tonearms are the size that they are because their one and only purpose is to play standardised 12 inch records.

The record industry couldn’t survive if each record manufacturer and each turntable manufacturer produced their own size of product. You can buy a turntable in Europe, a tonearm in the Americas, and a record in the Far East, and all will fit and work together because the sizes are standardised throughout the world.