As a beekeeper I’m often asked about bee stings. Bumble bees, wasps, honey bees.
Bumble bees and wasps have a ‘smooth’ stinger and are able to ‘pull away’ from their victim without much trouble.
Honey bees are a different proposition:
Their venom is stored in a venom sack and the sting is barbed. The act of stinging causes the venom sack to contract and inject the venom. For the female (only female honey bees can sting) it’s also a death sentence - the sting is barbed and as a result most of her internal organs are pulled from her abdomen and she dies.
Attached are some photos from my winter microscopy work. Feel free to ask me any questions. 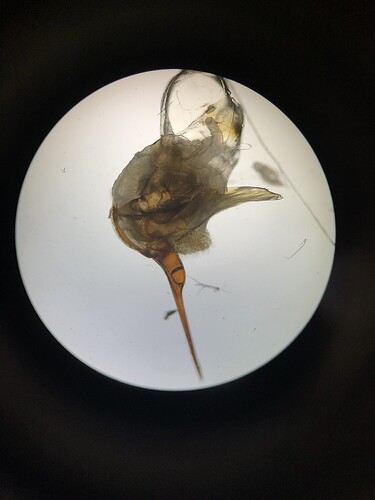 This is really interesting. Some of that info I’ve heard before, but I hadn’t realised about the females only.
One question I do have is, what is the chemical in the venom that causes all the problems🤔

It’s a blend of chemicals. Enzymes, Proteins, and Peptides.

The male honey bees (drones) have no sting.

I’ve always thought that’s why bees are only likely to sting as a last resort. Wasps on the other hand…

Quite correct! Honey bees will generally (it’s a generalization because you can get aggressive honey bees) only sting if they feel they’re under attack.

One wonders why… it’s an odd defence that definitely kills the defender whereas the attacker may not even die ( if a large animal, say), so not even a Pyrrhic victory. A Kamikaze barb mechanism that disembowels its user.

It’s not about an individual worker bee (who can’t breed anyway) it’s about the survival of the queen.

Bees operate as a colony not as individuals. The guard bees leave a pheromone signal against an attacker. So you don’t get stung once, you get stung dozens of times. Believe me, I have been! It’s a fabulous defence mechanism when you have 60k bees in a colony, 80% of whom can sting you!

How many stings would it take to be fatal to a human?

If you have an anaphylactic shock a single sting could do the job. The point is, honey bees know how to defend their colony. There’s a reason they’re willing to die for the cause. It’s called DNA. Learnt over millennia.

Do Wasps and Bumble Bees not work within a social order/hierarchy as the Honey Bee? In other words, do they not have a Queen to protect where the defence of the colony takes priority over the individual?

Just wondering on what would be the behaviour trigger(s) that led to a physical defence system that sacrificed the individual in the Honey Bee specifically.

I understand Colony vs Individual/Queen above all.
My musing was: imagine if the colony didn’t inevitably lose a (perhaps high) percentage of its strike force in one engagement…would the Queen not be better defended?

A mere wondering is all…

One interesting fact about the honey bee and its barbed stinger: if left to themselves - I.e. not swiped at by a yelping human (many other animals can’t get their appendages to the affected spot), the bee will turn in circles and “unscrew” the sting to fly away and live to sting another day. In other words it is not inherently fatal for them to use the sting, though it is high risk. I know because I’ve watched it several times - not of course on my own or anyone else’s skin, but when bees stung my leather-gloved hand on the back where they remained undisturbed as I continued whatever I was doing.

But something of which to bear in mind when stung by a honey bee, leaving its sting in you: the attached poison sack keeps pumping the venom for at least several seconds, so the quicker you remove it the less venom and subsequent reaction you will have, but be careful not to squeeze it for obvious reasons! Hooking with a fingernail, often easier done by someone else if not somewhere visible to you as victim.

And unsurprisingly, different people react differently from others, some barely swelling at all, some a lot - and you can become sensitised, and from observing some fellow beekeepers working without gloves and getting stung with impunity, I think it is probably also true that some people may get desensitised.

(I have my own experience of being stung working with bees not wearing any protection, at least not on my head - but I’ll save that for another post…)

There’s a reason they’re willing to die for the cause.

It begs the question as to whether they “know” they may die if they sting. Personally I doubt it, rather I think that terminology is just humanising bee behaviour which, though common and understandable, is clearly nonsensical.

Any advice for dealing with giant Asian Hornets?

That is predominantly what I’m faced with in my part the world. They are gigantic and give me the creeps. Honestly, they get so big here you can mistake them for sparrows and they make me jump out of my skin when one approaches.

Bloody heck, that’s a scary picture that you’re painting there,

The clear advice must be to move away to somewhere where these scary thingies can’t sting you.

Asian hornets have reached the UK, though noot in massive numbers yet and not yet to my island, where we are also still free of varroa (a mite that has been causing untold damage to the honey bee population requiring beekeepers to inspect frequently and take various actions to try to control). Asian Hornets are predators of honey bees, getting into hives and taking the bee larvae. It is an invasive species in Europe, and I understand has done significant damage to the bee population in France. My understanding is that these hornets are vicious beasts, with stingers about 6mm long which can easily penetrate thin clothing including the normal protective clothing worn by beekeepers, requiring people to wear special protective gear if trying to eradicate a nest because multiple stings could prove fatal.
This article from Guernsey may be of interest: 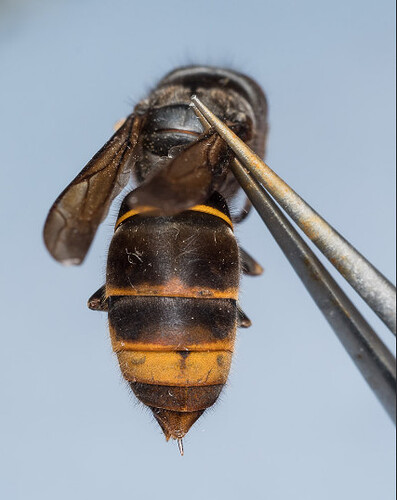 Asian Hornets Asian Hornets (Vespa velutina) have spread rapidly throughout Europe after arriving in Southern France in a consignment of pottery from China in 2004; it is estimated that they expand…

The Japaanese honey bee is, I believe, the only honey bee to have a defence against the Asian Hornet. When the hornet trys to enter the hive the bees swarm around it, completly covering its body, massively increasing the temperature in the centre of the “bee ball” and essentially cooking the hornet. Go bees!