Wich streamer around 2000€ in second hand

Ah, thank you Meni. Here’s a link to my journey into streaming from a CDS3/555PSDR.
BF’s journey from cd player to streaming

I have found high end streaming to be more musically satisfying than using a high end cd player, good though it was. However, it is much, much more complex to optimise.

And my Vega sounds far better to me than MacMini into nDAC/XPSDR which I used to have. (And to Linn Akurate – Klimax too expensive.)

The OpticalRendu is undoubtedly very good but the additional power supply need to be factored into the cost, as well as a switch, router or optical converter for converting from RJ45 /cable to fibre optic .

I am on this fibre optic path for the backbone of my network with 2 x Cisco 2960, FMC & LC optical cable between my servers (Roon Core & NAS) and main roon Endpoints. It works well for audio and my other computing needs. Connection to the router from the primary Cisco is still via BJC cable. Internet connection is FTTC.

For the budget of EUR2000 I would go with either a s/h ND5XS2 (I have had one - bought & sold it for £1,600 - 9 months of ownership) ) or split components such as the Stack Audio Link streamer and a Chord Qutest (or a s/h Hugo 2). The Chord 2Go,( although a strong candidate), still seems a little immature from comments over on the official Head-Fi thread, but this would be an option in the future, along with s/h Hugo 2 (slightly over budget admittedly).

The Melco N1A/2 - preferably with an EX upgrade - could also fit within budget, along with a good DAC, and deliver a great level of music library and streaming capability (USB) in one box.

PS. The Audiolab 6000N doesn’t support roon, which may not be a concern for some.

There. I said somebody would like Auralic, which is why you must listen for yourself. I am genuinely surprised you preferred it to Mac mini + Naim DAC. As long as you’re happy with it that’s all that matters.

Without wishing to hijack this thread too much, can I ask why the Audiolab 6000N doesn’t get mentioned as much as the Cambridge or the Bluesound? A bit of snobbery perhaps.

About the same price (as the Bluesound anyway) and similar spec, but maybe (?) a better UI app.

I feel that’s the big difference for me now, having a usable app to control the Qobuz streaming, opinions on the Cambridge one and the BluOS one are mixed to say the least.

Usability is indeed a crucial issue. I would not want to buy a streamer that cannot be controlled by the BubbleUPnP app. If a manufacturer offers an app that works better than the BubbleUPnP app, the better. But the possibility of controlling with BubbleUPnP is, for me, mandatory.

I’ve not heard a streamer that sounds better than Blu2 DAVE used as a CD player - though routing the output of Mac mini, Linn DS or microRendu through it can sound as good.

The advantage of streaming is 24bit remasters, which can sound better than the original CD.

Hi T-elmi,
The OpticalRendu is supplied in the UK with a £50 external power supply. I didn’t need one, as there is a spare outlet available on the HDPLEX that powers the server.

re the budget, perhaps it is worth revisiting the OP’s original posts. He already has a NAS drive, router, switch & connecting cables. The OR would need a £15 SFP optical transceiver module and a £10-20 fibre optic cable. None of this has a material impact on the overall budget, so I’m not really sure what you are driving at.

As you say, the ND5SX2 would be a great way to go for someone who wants an all-in-one solution.

It’s almost the same argument …every one has his own ears… never ended,a good streamer needs a good server,it’s one match for good sound…cd don’t need both

I am on this fibre optic path for the backbone of my network with 2 x Cisco 2960, FMC & LC optical cable between my servers

You can do away with the FMCs if you have Cisco switches and just use the SFP ports on the switch to connect by fibre. (Perhaps this is what you meant?) That’s one less device, and one less PSU to worry about.

Listen carefully to my experience

That, as you identify, is your experience. Mine is different.

Leaving aside the fact that streaming is more versatile than CD, has no read error issues with physical media, opens the door to hi res music - and opens the door to online streaming for those it suits, I remain unconvinced that at €2k secondhand one can get a better sounding CD player than spending the money carefully on a streaming setup. (Not that secondhand CD is sensible unless young, as mechanical wear can be significant, unlike streaming)

My ND5XS was similar in sound to the Shearne Audio CD player it replaced. Hugo DAC has been found by numbers of people to sound better than Naim DAC of various incarnations - and certainly I found it markedly better than the DAC in the ND5XS when I added it = a step up. Mac Mini running Audurvana, fully optimised, via dedicated USB output and an RF isolator made the sound better still - and similar cost to ND5XS and a QNap silent NAS, all of the order of €2k secondhand. And without streaming across a network there have been no network problems: no hassle with optimisation of switches and ethernet cables etc.

True I didn’t compare that setup with other CD players, but given the major step up with Hugo and the additional though smaller step up with the enderer change, the result was clearly a major step up from my old Shearne CD player. For reference, though price of course is not a good indication of sound quality, 20 years or so ago ago the Shearne player was priced about midway between CD5 and CDX.

And given the budget, not high end, and no suggestion that such a front end would sound anything like as good as yours does - but the question is what can be got for the budget.

As an aside, I found MM setup into Chord Dave DAC, listened through Bryston amplification and PMC EB1i speakers to be indistinguishable from Melco N1 in a short audition (I can’t say absolutely no difference at all as it was not an extensive comparison, but nothing immediately evident, so small if any).

Hi-res and some other benefit that you mention… for me takes you only in small steps ahead comparing To a good CD player who said or proved that physical media is a weak area ,but on the other hand having a streamer even an expensive without a good server and switch is taking you many years back …in reverse.you need to isolate the noises all the way around your network this is a big weak,that’s very expensive .streamers as record players needs big investments … cd is one piece…don’t forget our argument is about 2000€ 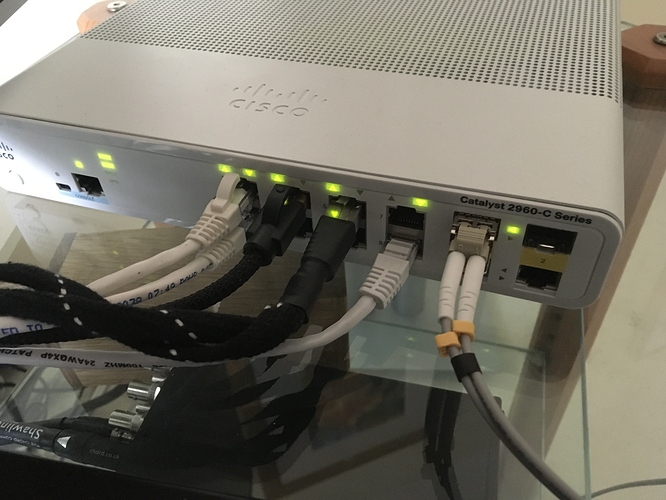 Hi Chris,
This is the downstairs switch nearest the router and the main roon endpoint, AppleTV, and the LG TV.

The FMC module is shown as well with the LC OM1 fibre optic cable that routes to the switch in the office upstairs with the NUC 7i5 (used as both a roon Core and general purpose WIN10 PC), NAS and Muso Qb2 attached there. I don’t think I can do without the FMC modules (£12 each) with this setup.

‘OM1’ is the specification recommended by SystemOptique and SGC / Sonore - although I am not using any Sonore devices I may do so in the future.

you need to isolate the noises all the way around your network this is a big weak,that’s very expensive

So why stream across a network? You don’t need to to stream music files from your own store. And if/when you want to open the door to stream online you can connect a network,apparently very satisfactorily wuth a secondhand switch costing £70 and low cost BJ cables, which whilst maybe not good enough for you using an ND555 likely are good enough for soneone considering €2k for a player.

You can play however you choose but in different level

Didn’t say anything against 2000€ Just said in my opinion a cd is better .what’s wrong about my opinion… Enough is how you look at things … there people driving Mazda cars like me it’s enough as you say but still others driving Bentley or Mercedes,all cars r taking you where ever you need to go

Hi, when you said FMC, I thought you might mean that you had a standalone media converter, but I see from your photo that you are using an SFP in the Cisco switch, which is what I use too, and seems like a neater solution as it’s compact, and draws power from the switch.

Clearly we will have to agree to disagree on whether or not you can get a streaming solution at least as good sounding as CD at a budget of €2k secondhand.