Wifi or Ethernet cable for streaming?

So many factors. In addition to the Wi-Fi network used, you also have to take into account the antenna on the device in question.

From what I understand, the antenna on the Atom HE is the cooling fins which are quite large. My UniFi network reports Wi-Fi experience for each piece of hardware and the Atom HE never drops below 100% on a 5ghz only network (over many weeks/months). As such I use Wi-Fi now. I do have an Ethernet point for it if needed.

Other devices on the network fluctuate but as a norm, only by 3-5%.

The Wifi frequency is set to 5GHz to improve bandwidth and speed. The router is in the same room (lounge) as the streamer (in direct view 12 ft away). I measured the wifi speed on my iPad.

Speed measured on the iPad on wifi: OK.

It’s a little bit low for 5 GHz but maybe you have interference. In any case, if it’s stable at that speed it should nevertheless be fine.

The internet is supplied by BT and the router is a Smart Hub type A. They guarantee a broadband speed of 55Mbps to the house but say it should be between 63 and 73Mbps. So I guess with Ethernet the max I could get is 73Mbps so my 70Mbps by wifi appears OK?

Most modern Ethernet networks run at 1000Mb. WiFi will be less, but the speed of the internet connection coming into your house is a different thing altogether to the speed at which your network devices communicate with each other and with your router.

The incoming broadband ‘speed’ is simply that, incoming.
The signal around the house is completely different & varies with distance & obstructions between TX & RX.
This is my wireless signal Mb in another room from the wireless hub. 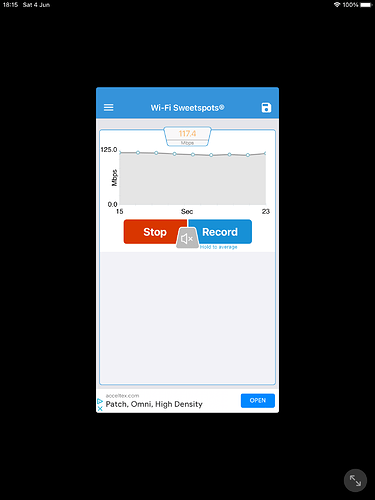 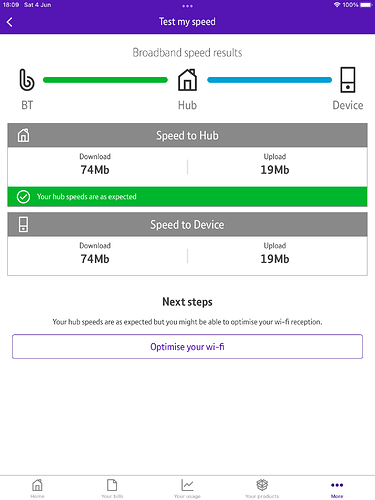 What is that you are using to test it as it looks quite good?

Looks like the BT app but you have to be a BT customer I believe.

Its BT’s own test that you can find in the BT app
It shows both incoming to the Smart Hub-2 & also to the testing device, in my case an iPad fixed on the 5GHz wireless band

Between devices on your home network you will have speeds considerably higher than those of your incoming internet connection. In this case that’s irrelevant as your line speed is at least 10 times faster than you need for audio streaming.

If you use something like the WiFi sweet spots app shown, you will be able to see the speed at the locations you have your kit placed.

I can confirm that Chris, I see >540Mbs when my iPad is within a few metres to the hub.

If peeps want to try it, search for apps such as Wi-Fi Sweetspots in your app store

Sorry I don’t understand. I would have thought if you were streaming data over the internet then the max you could stream at would be speed of data into your house in your case I believe it was 74Mbps. Even if hard wired with an Ethernet cable to your streamer you are not going to get higher than 74Mbps are you?

It’s commonly called speed, but that’s actually incorrect, it’s bandwidth, the number of bits per second. it’s volume, not speed.
Incoming bandwidth is 74Mb/s, distribution around the property is a separate stage transmitted from the wireless hub, & will vary, will be both higher and lower bandwidth depending on distance & obstructions.

It becomes even more complicated dependent on vendor equipment. There is a trade off between signal strength and bandwidth or speed. Add in a mesh system and you are then looking at the vendors control algorithms to maximise transmission and ‘switch’ seamlessly between ap’s as barriers are created or found ( as you move around the place with your ipad or other connected device taking bandwidth). The best we can control is using the vendor software to position the mesh system optimally.

Correct, for content from the internet. But if you had, e.g., a local NAS, then the content from there could be streamed at whatever the local bandwidth is over ethernet or wifi, respectively

These figures are just the maximum capacity of your internet service and LAN. They are of little or no relevance to a streaming service that only requires a fraction of that speed or bandwidth.

Have you considered Roon? If you run the core on your PC your equipment will pick up the stream on your local network with much less delay and improved quality. Ronn will also ‘semi’ unpack MQA so you can have improved playback on Naim streaming equipment.