My wife is quite keen on replacing our carpet with a wooden or laminate floor. Initially, I was quite concerned, but I’ve just read a thread on this forum from several months ago on this very subject, and it seems, with certain precautions, it might not be the end of the world from a sound quality perspective and may in fact be an improvement.

I currently have an Isoblue support rack and Naim SBL speakers. I intend at some stage to replace the Isoblue with a Naim Fraim.

I have seen references to items such as Naim chips and Isoacoustics Gaia and was wondering what those forum members who have wooden or laminate floors use under their equipment rack and speakers?

If it makes any difference, the floor of the listening room is concrete. 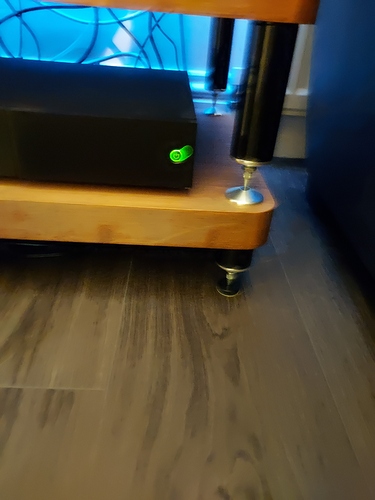 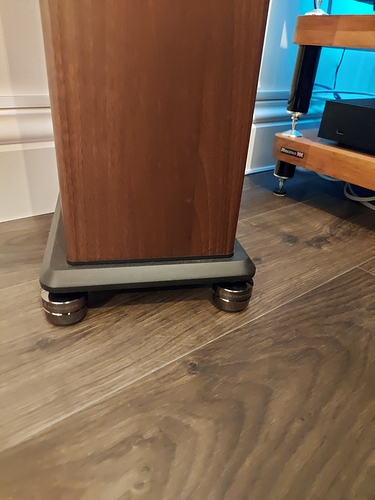 Thanks for the photographs. What are the supports shown in them?

Iso acoustic gaia for the speakers and atacama floor spike protectors on the rack.

I have SBLs too.

They were in storage for a while and during that time we had ‘floating’ engineered oak laid both on a solid floor and a suspended floor.

I certainly think natural/laminate flooring might contribute to room acoustics - we can always put a rug down I suppose! Naturally beyond that you don’t want to damage expensive flooring with spikes (avoid such flooring in upstairs rooms - a tip a pal gave me too late as the noise is awful if you have kids who like to dance around/exercise).

I am considering Gaias for my SBLs - less concerned my sonic improvements than protecting the floor though I have to admit I struggle to move SBLs easily and spikes can hurt you let alone the floor.

I must confess that I need new equipment supports and some regarded ones just don’t resonate visually for me - would I get used to them in a listening room, I don’t know.

I also have wooden floor on concrete. Speakers are Monitor Audio Gold GX 200. They are nice but quite bass-happy, which was just right when I bought them for a smaller apartment. Since then I have moved, and it is now a large (45 qm) and high (3,3 m) room. I don’t think the floor is a problem, but room modes are obviously much lower, so bass is now a bit much.

At first I kept using the Audioplan AntiSpikes, which I had been a fan of and used for a long time in the old apartment. (Edit: Nobody’s heard of them on the board I guess, but they are cheap to try from a well known auction site. Easy to handle (check the manual, it must be followed for them to work) and level, a good level of friction on wood floors, and can work very well in the right setting IMHO). The first attempt at improvement was to go back to the original plinths and spikes that came with the speakers, and put them on blocks of slate. Which helped, but the wooden floor is not very even (although new), so it was difficult to keep the slate blocks from wobbling.

Recently I tried IsoAcoustics Gaia III (got a good used set at a good price) and am keeping them for now. They helped somewhat with the bass, but not that much as the problem is most likely room modes & speakers. The sound in the bass is very good actually, just still too much. Mids and treble were more improved, with more precise sound stage and 3D. I also like them from a practical point of view: Easy to level, and the suction cups on the underside stick to the floor and keep the speakers from being moved by the Roomba, or even toppling them with a stupid movement (they are quite narrow without the plinths).

Ceraballs, the lowest model in the range and cost approx. the same as the Gaias. Didn’t like them much, it sounded cold.

Cerabase Slimline sounded much better. A cleaner sound than with the Gaias, maybe still a hint of coldness, but that might be a matter of taste. In any case, they are not made for speakers, were therefore difficult to level, and most likely I didn’t reach theier potential due to this. Also they are already twice the Gaia’s price.

The Cerabase Compact would have been the best fit for my speakers, but the dealer had none available to borrow. Based on the performance of the Slimline, I believe they could be very good, but they are also pricey (3 times the Gaias), and at this level the Townshend Seismic bases would also be in play. That’s too expensive for my speakers and for the limited time I will keep them, but it would be worth trying if it’s different for you.

The Ceras I tried (and I think it is the same for the others) have blank metal on the underside, so are quite slippery on the wooden floor.

All comes down to not driving the room with too much bass. Room interface is the key to listening to the music and not “hi-fi” for its own sake.
I have a wooden floor, parquet, in a 1930s house. Its suspended on joists, not ideal as a solld floor has less chance to resonate. Speakers are B & W 802D3s (94kg each) on Stillpoints and sources on wall shelves at the other end of the room. Works very well. Better half has banned Naim Frames for most black boxes. Don’t feel I am missing out too much. Room is about 18’ x 13’ and odd shaped which helps. So do higher ceilings in older houses.
The parquet has a few scuffs but not really visable as the plinths cover them. A 500DR helps to keep the LSs under control. Do not spike with heavy speakers!
The easy way out is a pair of standmounts on matching stands. Much less chance of driving the room but impact on orchestral/rock will be reduced. Depends what you can live with. Took me quite a bit of time and money to get where I am.
I seem to have gone from equipment supports to room acoustics but they do go together. 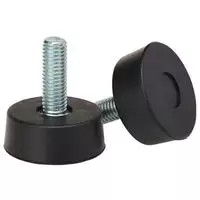 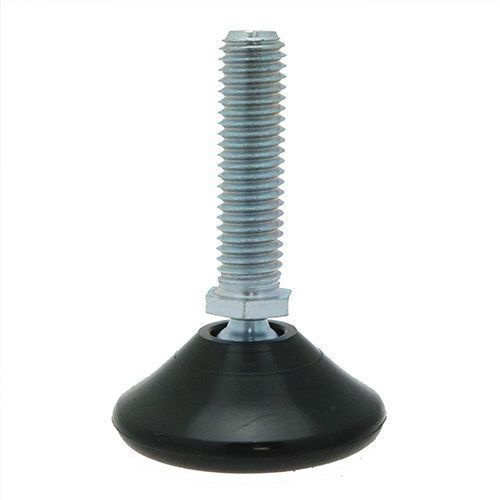 These are £1.50 each, M8 studding, 30kgs load rating (each). Might put stillpoints out of business??

I think I paid about £12 for eight threaded Rubber feet. They come in various load ratings and thread sizes and offer a degree of isolation from vibration for peanuts. So before splashing ££££hundreds on snake-oil products try these. If not satisfied then you haven’t wasted a tonne of cash.

My floor is parquet and solid underneath. Speakers are active ATC SCM 40s at 36kg each. I found floor protectors of Naim chip size too awkward to fit under such heavy speakers, so opted for Quadraspire QX7, which are much easier to use. They’re also supposed to sound better, but I’ve not done a comparison, so can’t vouch for that. The setup certainly pleases me.

Spike shoes mean damage to a floor is totally preventable. But you do need to ensure the shoes are wide enough to distribute enough weight. A really heavy speaker on a really small shoe will leave a coin shaped mark.

For positioning, I recommend Linn Skeet. They slide effortlessly over most wood floors without scratching. Once speakers are in their final position, I replace the Skeet with something more substantial with a bit of grip.

Wood does colour the sound but if careful, in a good way. A decent heavy throw rug between you and the speakers and a woid room accents the sound just enough to give a live in the room sound that wall to wall carpet kills in my experience.

Herbie’s Audio cone/spike gliders
Have them under my Kudos Titan T88s (65 kg).
Work great and they are made to “glide” over wooden floors - no damage to floors, work as well if not better than Naim Chips and cost very little. Forget the exact price but paid about $250 US for 8.
Makes it so easy to move speakers
David

Hi Suedkiez,
I can confirm that Cerabases compact sound and fit very well in the speakers. I needed only 6 for my speakers, because the mass is on 3 points. The other 2 are just stabilizing. 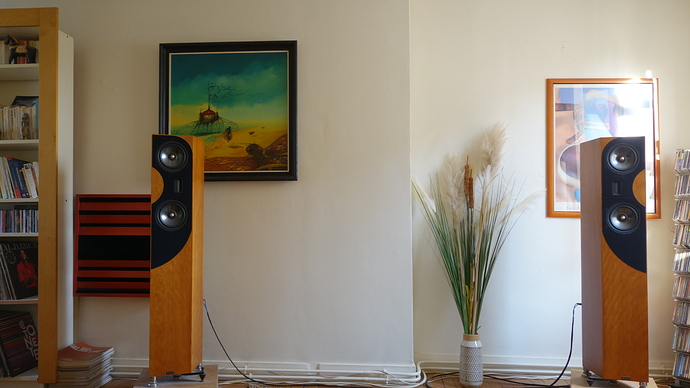 Thanks for confirming. As I thought, they are very much worth trying for the OP

3 are of course always easier to level on a plane, and save some cost, but I would probably have to drill a new hole. The way the 4 existing ones are positioned (in a slim trapezoid, as the speakers are deep and narrow), I would sooner or later make them fall over.

As I am not unhappy with the Gaias, I think I’ll save the money to get new speakers sooner

My dealer really likes the Soundcare Superspikes, which will protect your floor while supposedly working like spikes. I personally haven’t bothered and just use the rubber/gel feet that came with my speakers. (They also came with spikes, you get to choose which to install)

Just to clarify, my speakers sit on 3 main spikes, one in the center, and 2 spikes on the side for stabilisation. So I let the 2 side spikes but replaced the 3 other by cerabases.
But in general cases, you need 4 ceras by speaker.

Thanks to everyone for all of the replies so far. It seems there are lots of options out there, so I need to do a bit of research into these suggestions.

I seem to remember from reading Hi-Fi Review in the late 80’s someone saying that you should drill generous sized clearance holes through the wood, then drill into the concrete, hammer in rawlplugs, and screw crosshead screws into these until their tops are flush with the top of your flooring. The speaker spikes then sit in the crosshead screw. When I bought our current speakers I for some reason didn’t suggest this to my wife, and just cut up an old squash ball into small squares instead!

I am experimenting with IsoAcoustics bronze feet under my amp at the mo as my system fits in a cabinet so some interferance likely - not my idea, but…

Anyway, Isoacoustics also make the Gaia speaker foot which can be ordered with matching threads to fit your speaker stands which may provide a solution on a wood floor. They are not cheap but the Orea mount recieved praise when reviewed by The Ear

Alternatively, get the installers to lay a polished concrete island where your speaker stands go, que for O/H to explode!

I have used Skeets on parquet flooring and on suspended wooden floors; I confess they supported active SBLs on Mana stands. The system sounded better on a solid floor, but as the ceilings were quite high (mansion block) they system had room to breathe. In the suspended floor setup, the whole house was timber frame where the wall panels vibrated in an unwelcome manner at certain frequencies and higher volumes - but they were still enjoyable if the volume was turned down. No damage to the flooring in either situation thanks to the Skeets.

I found that 2p coins worked.