I knew they’d halted production but I thought that was due to parts availability, just seen this on the Naim website so presume it’s official now?

Am I slow to the story here? 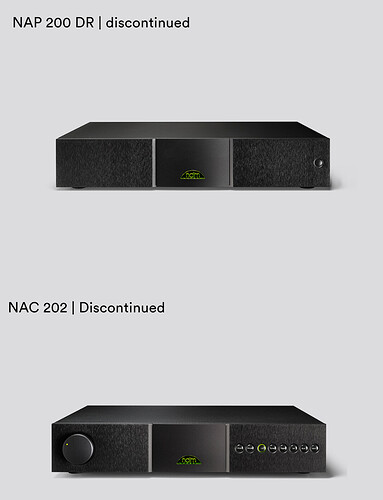 We assumed they were back in December when they weren’t included in the price change list and dealers suggested they were. But I think they must have changed the website recently as this is the first time I’m seeing it.

Now that combo will get super popular !

Yes, for now. But we don’t know if it’s definitive.

I would have thought the SN3 would have been the final nail in the coffin for the 202/200 combo. A shame, but things move on.

They said the reason is some parts they can’t have for producing the 202/200 actually.

I think it more a case of because certain parts were (and probably still are) in short supply, they would be prioritised elsewhere, so the NAC202 and NAP200 production was suspended.

My dealer informed me it was due to the SN3 being so good.

Well I suppose you could use the 282 with the SN3 as a starting point into the move to separates, but yes, that’s quite a high cost entry point into the Naim pre-power range.

I never really got on with the CDX2+202+200. Then again i never really gave it a chance and find a decent pair of speakers to partner them. I think if i had a decent source at the time and got my old chrome bumpers serviced, i may well have stayed at that level instead of obsessively going to what i have now (CDS3/Auralic/LP12+252+300+SL2). Anyway, i do appreciate what i have and what it does. Sounds amazing listening to Mahler 5, vienna philharmonic, pierre boulez.

(Can’t help feeling though that something of the spirit of Naim has been lost. Will no doubt get shot down for this. )

I’m sure Naim will (eventually) turn out a worthy replacement…

In the meantime you’ve got a fine system there Chris. The 152XS was really the slimline version of the 282.

Hi.
He was not selling.
I was not buying.
Just shooting the breeze.

To me this is naim killing off lower level classic boxes.

Offer is now SN3 integrated at the £3-4K price point. It’s very good (according to review) and those who want “separates” then you have to jump to 282/250. SN3 + NDX2 satisfies the vast majority of the phone based generation?

The Nova is very capable (dealer says) at £4k for single box lovers. We still use a SuperUniti (+rPI for Tidal connect) in office so can well believe it.

SN3 + NDX2 satisfies the vast majority of the phone based generation?

Went to SuperUniti (marriage/house “merge” enforced) quality but lots missing. Although many would have heard an enjoyable stopping point. Started the naim journey. Moved to 272/250 as a space/sound compromise. Added PSU since Argos sold a 3 slot unit.

I can well imagine someone who’d never heard separates going to a dealer’s and walking out with a Nova.