Thanks. However, the issue is not the balance pot. It is caused by the volume pot create different volume in left and right channel when it approaches the lower end of the volume range - to a different degree in individual pots.

That sounds wrong (sorry for pun) shouldn’t a supplier be delivering parts that consistently meet the customers spec via their QA process? The cost of 100% inspection/test of parts at Naim goods in must be very high

I would disagree with that. The first 252 I had the balance was around 2 o clock regardless of volume. 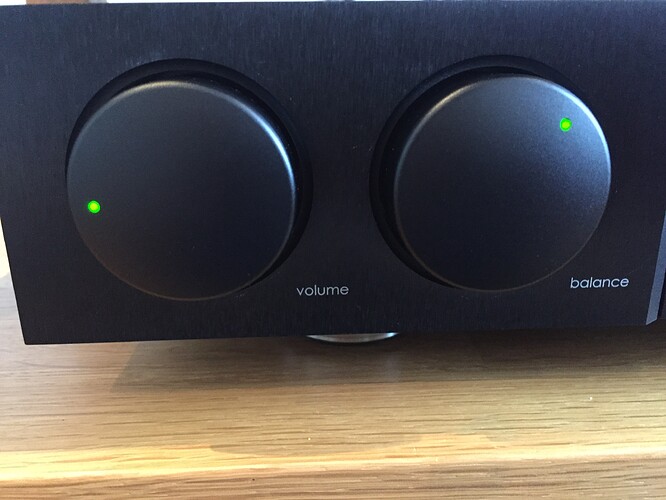 Yes, if the supplier can meet the spec. I expect alps have been clear about what they can offer. And perhaps suggested to naim that naim grade them. Most likely a cheaper option than having alps grade them ( and naim still having to check).
Usually you can get top quality if you are prepared to pay. But often you can be a burden to a supplier with challenging requirements. Which is where I expect alps and naim are.

Seems like more people use the balance knob to compensate for component issues than room issues.

I would disagree with that. The first 252 I had the balance was around 2 o clock regardless of volume

The problem I and Stu (and others) had/have is volume dependent and occurs because the volume pot goes out of balance at the low end of its range, the more the lower it goes. It is a well-known property of the chosen Alps volume pot. It does not occur above a certain volume level that depends on the particular pot. So in my case, the balance knob is dead center as long as I don’t go below 7:30 on the volume pot (and 8:00 for Stu); if I do, I need to readjust the balance knob. In this scenario, taking away the balance knob would mean taking away the option to adjust balance at affected low volumes. The only solutions I can see for this issue would be volume pots that don’t do this (like a different pot or more rigorous selection), lower preamp gain and/or lower output levels of Naim’s digital sources, or a different volume control design altogether.

In your picture, the balance pot could be inherently unbalanced, as you seem to say consistently and regardless of volume, and must be off its center for audio to be centered. That would seem to be a balance pot issue and maybe old 252 units had this. If it’s as bad as in your picture from new, I’d argue Naim’s quality control should have caught it. But would be a different issue. For this, omitting the balance pot altogether as you suggested would of course help, but it seems to me that this would also require solving the above volume pot’s low-level imbalance issue.

It seems that in many cases the balance knob being uncentered is just because of the knob having been put onto the pot’s shaft in an uncentered way. There are existing posts and threads about this, too. Is usually easily fixed by pulling it off and putting it back onto the shaft with an appropriate rotation. Beware of the LED cable and ensure sufficient freedom of movement when putting it back on. I believe there might be notches on the shaft, in which case it may not be possible to have the knob exactly centered when the audio is centered, though.

In the case of your picture, it seems that reseating the balance knob in this way would help just as well even if the balance pot is inherently uncentered. (Though in this case, putting the knob in the center position while leaving the pot shaft rotated, as it would have to be for centered audio in this case, would lead to very different travel to left and right. But may not matter in practice, if it is about the knob showing “centered” when the audio is)

Edit. Note that regarding notches on the shaft, the different pres seem to differ:

It depends, it may be misaligned or have slipped on the shaft (it’s just a friction fit secured by nut that then closes around the collar). There have been instances where if it’s loose and the LED wires get snagged or pinched the knob can drag and then eventually it gets misaligned. Does it go the same distance wound all the way left to right? If not, it’s a fairly easy fix for your dealer to rectify this. Best thing is to have it checked out if you’re uncertain.

The 552 has a nut the 282’s is on splines. Both of these were off centre. The latter’s can be pulled off but take care the wires allow full movement. I did the 282 myself but got the dealer to sort the 552.

Seeing as how we are posting photogs of our knobs, here’s mine. 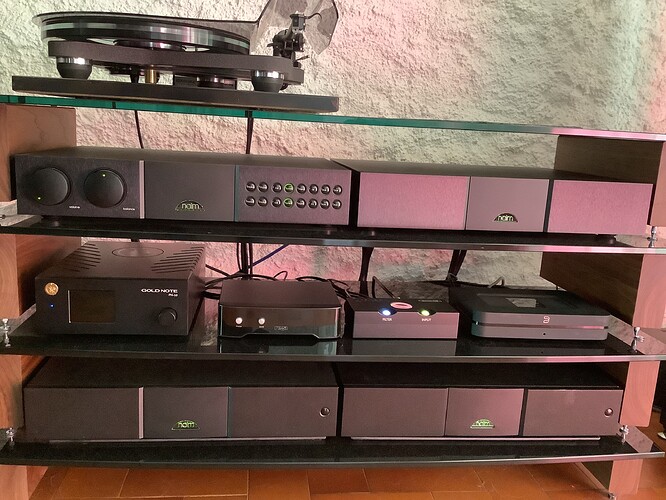 Low and centre. Room is odd L shape and very rustic, lots of glass, furniture and bumpy walls. Sound is pretty centred to my old ears. I think there could be a qc problem with those positions unless Naim has changed suppliers along the way.

unless Naim has changed suppliers along the way.

It’s always been and still is Alps to the best of my knowledge. Richard IIRC said somewhere that yes, it is a property of these pots, but Naim chose them because they think they sound best. So selecting and grading them is the solution, but it seems that occasionally one slips through. Of course it depends on the customer’s habits and system. Someone who never goes below a certain low pot position may never encounter the issue with the same pot that makes someone with more sensitive speakers or a less fortunate living situation go mad.

I suppose that making a fundamental change to the volume pot, like different model or even supplier, would require Naim perform a complete reengineering - as has happened with other components in the past. Certainly something they want to avoid

I expect these are commercial grade pots with quite a big tolerance. Some batches better than others. But all in spec. Hence why naim grade them. Maybe I’ve been lucky, or have cloth ears but the balance pot on my 282 only moves if I do. If I sit centrally, so does the pot. And never a need to tweet based on volume. As was/is the case with my 72.
Sounds like alps have pushed the tolerance on pots during lockdown?

I expect these are commercial grade pots with quite a big tolerance. Some batches better than others.

Probably. Guessing here, but Alps will probably have cautioned about this and may well have recommended a different spec, but Naim found this one sounds best and may have taken it upon themselves to grade/select them.

Maybe I’ve been lucky, or have cloth ears but the balance pot on my 282 only moves if I do

Did you try by reducing the volume step by step down to zero? Believe me, it is impossible not to notice it IF your unit’s volume pot exhibits the issue AND the volume level is below the magic threshold. One channel simply starts to drop out gradually when you cross the threshold, and increasingly more as you then lower the volume further. And in some units this threshold is simply high enough to impact normal listening (typically at night or background level). As not every unit has it, such as my dealer’s and other people’s who tried above in the thread, it is definitely possible to be just lucky.

Sounds like alps have pushed the tolerance on pots during lockdown?

Who knows. May well be just a coincidence. In the course of the past few months, there were a few members who asked about this issue, me included. It’s a small sample. Naim will have sold many more pres without the issue being sufficiently noticeable to bother the owner. With a volume pot that only exhibits it at a sufficiently low level, below anything the owner uses, nobody would notice it, or would ignore it.

Have to agree, my balance pot on my 282 is bang on but my previous Supernait2 was slightly biased to the right channel.
I agree, I would be annoyed if if was off by some margin. Seems odd given Naims attention to detail generally…

Have to agree, my balance pot on my 282 is bang on but my previous Supernait2 was slightly biased to the right channel.

Are you sure it’s not the recording? I’ve found on some older recordings especially. The singer is not always dead centered. Sometimes off to one side or the other.

That’s not the problem. When volume is low its louder overall from one speaker.

Are you sure it’s not the recording? I’ve found on some older recordings especially. The singer is not always dead centered. Sometimes off to one side or the other.

If this was the cause, it would not be fine at higher volume, then suddenly start to lose balance when lowering volume below the given threshold (8:00 on the volume knob in Stu’s case), and from this point on becoming progressively more unbalanced the more the volume is lowered. (Overall, not just the voice; one channel simply drops out altogether)

Why won’t some people read my posts or believe me? It was confirmed to be a property of the volume pots (some pots exhibiting it more, some less, some not at all) by Richard IIRC (am sure but adding “IIRC” because not going to dig up a quote) and definitely by Naim to me and others (just search the forum if you don’t take my word for it), and it was fixed for me and others by replacing the volume pot with a better one. Stu’s issue seems exactly the same.

I’ve owned 282, 252 and now 552 pre amps. The slight skewing of left/right balance related to the volume pots has improved as I went up the pre amp hierarchy and it is now spot on with my 552.

This might be an indication that Naim are more rigorous with volume pot specification/tolerance and their volume pot selection as the cost of the pre increases.

Not sure thats the case as my 282 is spot on, further up the food chain users with the 252 have issues.

You’d sort of hope so!
Saying that, my 282 is near spot on. I listened super critically today. Put it in mono and reduced the volume pot. Very slight loss on LH channel at a level I would never listen at. I.e. almost off/ strained to hear it. If that’s the issue, I can live with that. In fact I could live with that issue if it were on a 552.

If that’s the issue, I can live with that.

I could, too, and I am sure everyone would. It’s just in my case originally (before fixed) and in Stu’s for instance, the right channel started to go away at 8:00 on the knob. Which is well above background/night level for me - I rarely go beyond 9:00 at the best of times before it’s too loud (with NDX2), so that left a narrow range between 8 and 9 indeed