Thanks all and I think Ian’s on the money. Keep an eye out without looking too hard. And if a 300DR or a 500 comes up at the right price, whichever does first, then who knows…

Buy yeah loving where I am right now

Keep an eye out without looking too hard.

That’s my approach on most of my upgrades, these days.
Plus using Dealers ‘Wanted’ lists…

I would be doing exactly the same in your shoes Dan re. leapfrogging the 300.

Which probs means I should also wait for a 500 to make the hassle and expense really worthwhile.

Looking at your rack I 100% get that it looks great and adding a 500 will alter things. Personally I think the 500 will look great and once in you will never look back. It sounds fantastic and if you like to listen loud it will give you all you need. It’s a big change I know but 500s come up for £7k. Factor in a service from Class A or Naim and you will have a seriously great power amp. That is the direction I am heading in at some point.

Yeah it’s a statement piece that’s for sure!

Just to counter some of this my dealer has always said “don’t underestimate the 300”. His belief is that a 300DR is better than a non DR 500. He did say the 500DR does better the 300 equivalent. I’ve never heard either version of the 500 but I would certainly audition at home before jumping in.

I have had both non DR and 300DR and greatly preferred the DR version.

Yes, my 300 (bought as new) was updated to DR a few years later and there was a big improvement on what was already a fine amp. Better in pretty well every respect.

I heard the 252 with Supercap DR and 500 DR and it sounded fantastic. TBF when I got home and listened to my 82, Supercap 2 with 2 x 135s it sounded great too. But not on same level as system Iistened to. The demo room had Linn LP12 Klimax and NDX2 with 555PS. My NDS with 555PS spunded better, but the LP12 Klimax did sound a fair bit better. My perception was the 500 made a lot of difference. I know everyone on here says preamp first but the 500 works well with the 252 and initially was brought in with 52.

I slowly upgraded from a full XS system (ND5XS with a 152 and 155) to NDS, 252 and non DR 300. The power amp was the final change and was the biggest leap I’ve ever heard in a single upgrade. However, I think it was finally allowing me to properly hear what the NDS and 252 could do so wasn’t all down to the 300 per se.

I’d like to demo a 500 at some point but am currently not in a rush as I’ve upgraded a lot in my system over the last couple of years and funds need to recover. I almost demo’d one recently instead of changing my speakers but the dealer was over 200 miles away and (not unreasonably) wouldn’t come to me. With commitments most Saturdays and work during the week I couldn’t get down to him before it was sold to someone else.

I own the same amp setup 552DR/300 and its sublime for me its a 500DR nothing less if I feel inclined to upgrade.

I’d stay put Stu. You have made some big changes recently. I’d just enjoy a fine system for what it is. You can always make more changes further down the line

Forget all the options go straight for a second hand statement system. Get that and you have reached the highest point whereby your mind will finally be at ease because there is no further possibility to upgrade with Naim

Stu, Thomas is right. You should upgrade the speakers. Why not the Warsaw ones, only 65 k. And so lovely 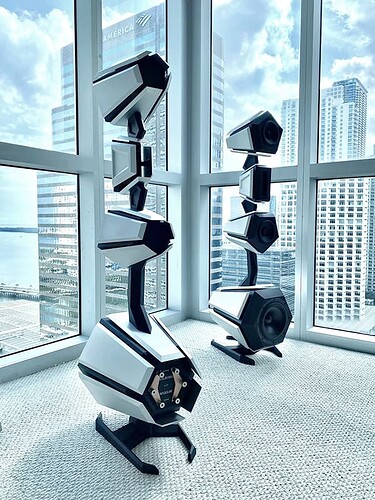 Probably not a comparison that’s been made too often

GraemeH. That is just plain cruel.