Have always thought of adding a dedicated supply for the hifi system but pulling floorboards etc has always put me off ,plus SWMBO definitely doesn’t like mess! especially unnecessary mess just for the benefit of the system.

So the question, the lounge wall where the system lives backs onto the broom cupboard under the stairs which backs onto the utility where the main fuse board/cu live so could I run the cables for the sockets inside trunking rather than have to run them up through the floor void then down the inside of the lounge wall, this would make life so much easier and with minimal mess. So trunking from the new cu along the utility wall, into the broom cupboard then through the wall into the lounge.

All work will be carried out by a qualified electrician, is there any reason why this approach would not be possible, thanks in advance.

Seems an eminently sensible solution. Trunking for cabling is fine and whilst not visually appealing in most situations, for you this is not a problem.

Only things which spring to mind are:

Getting the sparks to check/improve the quality of the earthing on the new circuit would also help.

2- it’s down to the individual sparks around how they run cables – but from what you’ve said, this appears fine.

3- are you going to run one wire (10mm best it seems) and then distribute via a block?

New CU etc, room not a problem, had planned to run three individual 10mm, one for each unswitched double socket, maybe only two would probably do or is it better to run just one and use a mains block?

We definitely speak to them about the earthing.

And you may not want to run certain types of kit on the same circuit e.g. some PS’s (other manu’s) and kit appear to contaminate things(?).

Have a look at @JimDog 's recent thread if you haven’t already (?).

And don’t forget to ask the sparks to take the feed to the hi-fi from the (new?) Henley block first.

There’s no way I would tolerate plastic trunking stuck on the walls. Talk to your electrician, they are used to running hidden cables and are usually good at pulling them through tight spaces. Of course there will be some disruption but it may not be as bad as you think.

I would use a single 10mm cable, and crucially, run it from a small separate consumer unit wired directly from your meter, avoiding the main house CU.

Many thanks for the replies, new CU would be next to original so only a short run of trunking, but I will discuss with the electrician his view
but the thought of carpets and flooring up would really not go down well.

I will do some research into the mains block, not discounting any options really, what ever works the best.

Added a pic of the utility, new CU will go next to the original, so from there trunking along the top of the wall above the door through the wall then into the broom cupboard and we are nearly done. 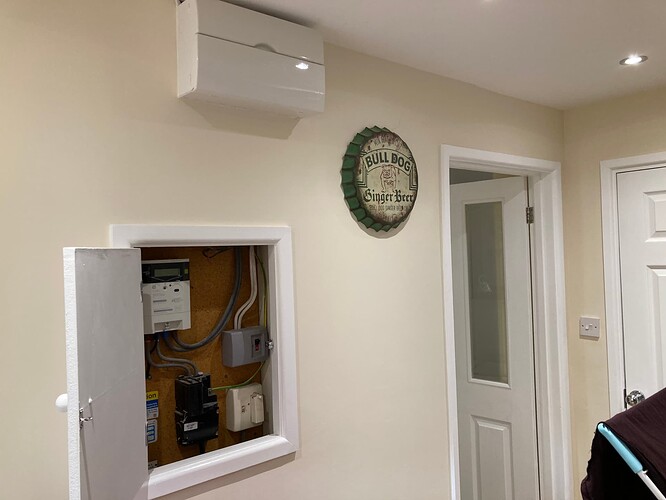 A lazy electrician might be tempted to run the new consumer unit from a spare slot on the main one especially if they will be right next to each other. Make sure yours connects it back to the meter. The same applies to the earth, run it back to the earth connection by the main fuse.

You would like to think that wouldn’t happen but as you pointed out with the CU’s being side by side I guess it would be tempting but I will make it clear that is not what we require.

I have my three 6mm2 cables in wall mounted trunking above the skirting board and it is quite neat.

I run 4 10mm into double unstitched sockets as shown. I have always found a use for all four and personally prefer direct connection to the sockets over any type of block (and I have tried many)… 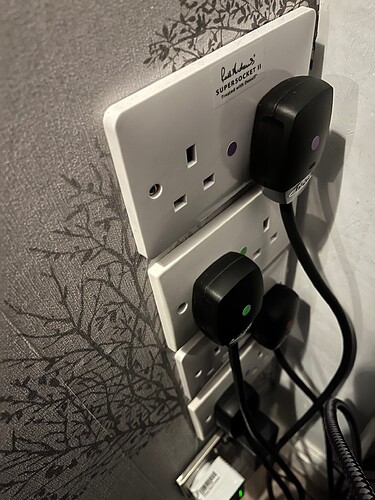 Hi @ChrisSU
Not being knowledgeable about these things I infer that the connection via a separate slot in the main consumer unit would be inferior, but can you explain more? What would you expect the detriment to be, for example? I had a new line fitted and suspect I may have had a lazy electrician. I gave them the diagram that’s was shared on other threads, but noticed a slot on the main PCB marked stereo last night, right next to the new consumer unit. Is this relatively easy to fix do you think?
It’s a shame if it hasn’t been done correctly as the electrician was recommended by a dealer specifically because they understand this area of work.

I think to understand whether it can be fixed, we would need to know ten layout, e.g. where the main meter is, how far away is the CU, and what space is there around the CU. Photos may help

As a general plan, you might take the tails (thick cable coming from the meter going to the CU) out of the existing CU, connect them to a Henley block, then take a short cable from the Henley Block to the old CU, and another to a new CU which will be just for your HiFi

Answering for @ChrisSU – and not stealing his thunder (I hope):

1- the ideal is to have a separate CU fed from the incoming supply first i.e. away from any ‘noise’ on the mains/internal house supply from things like fridges/some PSs for other kit/hoovers et al. If you have circuits for general house supplies on the same CU, there’s a chance you get to hear ‘clicks & bumps’ through the hi-fi.

2- if done optimally, you want the cabling after the meter to go in to a Henley Block, which has 2 sets of ‘tails’ coming from it, one going to the house CU, the other to the hi-fi CU, the hi-fi CU to have the ‘first wired’ set.

If, as you suggest, all that’s happened is a feed has been taken from the house CU to a separate hi-fi CU, then you may not get the cleanest supply, with some of the ‘noise’ from the other circuits in the house CU.

You also need to get the sparks to wire the earthing optimally too.

@HappyListener and @GadgetMan thanks for the replies. I am not at home right now, but will send a picture later, thanks for the advice so far. The units are right next to each, a few mms apart.
Anyway, I asked the electrician to comment, so I’ll follow up once I know more. Unfortunately as it’s a new flat, to me anyway, I don’t have a before and after reference in terms of how it sounds and whether it’s improved. My equipment’s improved a lot lately too, so of course that means more variables.
If it turns out they’ve done a sub-optimal job, I’ll certainly tell the dealer that recommended them. Now I think back, he was telling me that 6mm cable was fine and that I didn’t need this that or the other, and I just said this is what the manufacturer recommends (gave them the diagram) and asked whether they were happy to do that. They said they were, but perhaps, in the end, they weren’t.

As you already have the second consumer unit it’s an easy job to get the tails split and a Henley block fitted. As you have things at the moment, the second CU serves no practical purpose. I imagine some electricians don’t like splitting the tails as it has to be done with the mains live, whereas what you have doesn’t. Getting it done properly is very worthwhile. Ensure that the earth from the hifi CU is taken back to the meter, and not piggy backed from the house CU.

Thanks @hungryhalibut!
I’ll look into it. I live in a flat, my meter is in a separate building, but I assume that wouldn’t limit what can be done as the consumer unit is the business end of things for the purposes of this exercise?

That may limit what you can do. Splitting the tails rather than taking the second CU off the first should definitely be done. If you can’t get the earth all the way back, then so be it. You can only do what you can do.

Thanks all. Electrician booked in for Monday. I’ll report back when done. I must admit I wasn’t as knocked out by the dedicated mains as some reported, although, as so much was new, I had no reference and it all sounded pretty good. Now I understand I wasn’t really hearing a dedicated feed at all.
Pretty disappointed with my electrician though, especially as he was recommended by a dealer. Caveat emptor and all that, I admit I don’t understand this area, but I thought I’d gone to someone I could trust and would know what to do. Anyway, live and learn. Thanks again!

In reference to you mentioning improving the earthing, I was going to get them to run an earth back to the main earth inside the main box.

When you say improving the quality of the earthing are we talking improved or extra bonding to the system.