Air Rifle purchase, anyone any experience?

Well it had to happen, Only January and first Grey Squirrel of the year has arrived. We have not seen our Red Squirrels for several days now. Where I live, we are very much on the “Front line” of the war between the Greys and Reds. Took about 12 greys out last year via traps but am now looking for an air rifle as trapping is not always feasible, and in this season not practical for humane reasons and the risks to the reds.

I am not an experienced shooter so above all need accuracy and consistency from a rifle so have been looking at PCP’s rather than a spring loaded. Any recommendations as to make or model that people have experienced or know about would be welcome.
Initial thoughts are;
BSA Scorpion SE PCP,
Air Arms S510 Superlight PCP,
Or a cheaper option of the Gamo PHOX mk2 PCP
If anyone has air rifle experience or advice I’d be happy to hear from you !

What is the back story between this Red and Grey Squirrel war??

What did you do with the squirrels after trapping them?

Have you considered contacting local wildlife trust etc for help to protect the endangered red species.

Pests in the cat category.

A quick scan down the Wiki page provides an answer - under Predation:

Hw 100. In .22, plus a decent scope. Will dispatch out to 40yds easily. Deadly accurate. Hard hitting too.
Dont bother with any others, all have issues including silly mags. Hw100 is the best out there.

It’s actually illegal to release a trapped Grey Squirrel in the UK. There is a local chap who does Grey squirrel control during the summer for Natural England, He comes up and dispatches the caught Greys humanely. He is getting on a bit now and I don’t want to keep calling him out if I can dispatch them myself. It’s not trapping season currently as it’s too cold, especially if I caught a Red. Hence wanting the rifle now so I can shoot any before they impact our reds.

Thanks Gazza,
I’m in the local wildlife trust and they leave all red Squirrel work to local Red Squirrel Groups of which there are about 10 in Cumbria. My local group is very thin on the ground so I want to help by shooting my own Grey pests. I could even consider shooting Greys at the request of the group if needed.

I’ll have a look at this, I was thinking of a .177 rather than .22, due to accuracy? Will certainly look at it, have you used one for pest control? We have a lot of close woodland so would imagine a carbine would be better rather than a longer rifle barrel.

I know about scopes and binoculars from Birding and know eye-relief will be something to seriously consider.

In the UK the Red Squirrel is a native species and the Grey is an introduction from North America. The Grey has spread out throughout most of England and Wales and is also now in parts of Scotland. It carries a pox that is lethal to the Red Squirrel and due this pox and also the ability to out-compete the Red’s in most environments, the Red is dying out rapidly. Where you get Greys you don’t have Red’s for long.

Once zero’d at say 30m, you can either use the dots to hold over or under, you adjust the clicks up/down. Depending on distance.
And yes, you’ll need to know the distance to target. You can buy £50 rangefinders for that.
At 50m and .22 you should be able to consistently hit a 10p piece easily.
Pcps are so boring boringingly accurate and quiet.
The grays will not stand a chance.

‘Dispatch’, is that a euphemism for killing them? What you need is a few Pine Martens to balance things out.

Trouble is they may well have a liking for Red’s

No, that’s the thing. In Ireland Reds are making a come back as the Pine Marten has reappeared, the reds have an innate fear of the pine marten so are wise to them but the greys have no built in fear as they are not indigenous and as a result they make an easy lunch for the pine marten 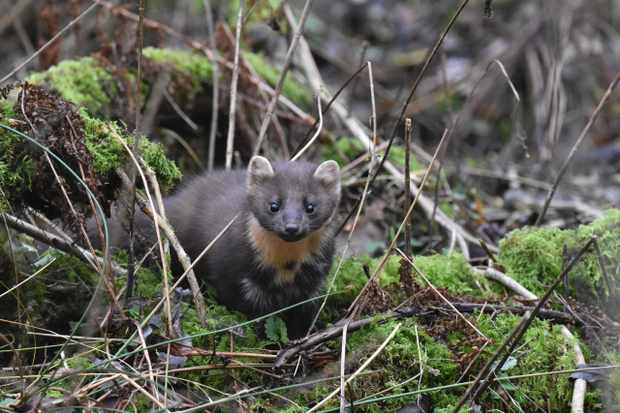 I used it on a local farm to keep the rat population under control for the farmer, who was a drinking buddy. The Crosman came fitted with a small but very accurate telescopic sight. It’s a short weapon, but quiet, very accurate, no recoil and I very rarely had to shoot the same rat twice! I would suggest 50 metres is about the limit of effective killing range, better at 30-40.

I have had an Air Arms S410 (IIRC) - uses compressed air from a SCUBA tank. Very good, very accurate - but of course limited to 12ftlb or something, as are all air rifles that don’t need a gun licence (in the UK, anyway). Good rifle, get a scope mounted on it, get some practice and get reasonably close to the squirrel, or it won’t kill it.
.22 is best, I think. More mass. You could have a look at Prometheus Pellets - they are not lead.