I think it is about time that both Apple and Android started interfacing more.

I don’t think Android is too bad tbh. Apple is way more restrictive trying to tie people in to their ecosystem.

I currently use Spotify and Bandcamp just with HD streaming becoming more mainstream I would like to try all the services before making a decision. Streaming is still my second choice of music listening

With both Apple and Amazon’s announcement today about their new HD services combined with their normal services many more people will be interested in this partnership with Naim. I’m hoping that there is a partnership in the works as this will truly be a great update that many fans and users of NAIM equipment will allowed to compare and contrast services based on content and overall sound, response and user interface. It’s time. 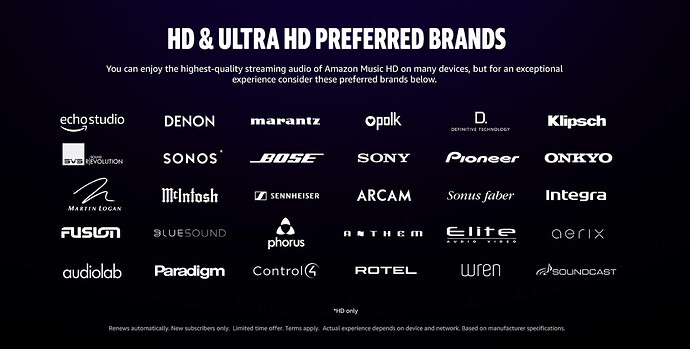 There are many already ‘dancing’. Including Blusound. It would seem possible, let’s hope.

…personally I could care less about Apple or Amazon music. In the past their music services were not that great compared to any others and do not imagine things will change much just because they add HD.

Same here! Trying out the free 4 mth deal on Amazon HD, not impressed:

A couple of quid a month cheaper than others, but won’t be paying up

I don’t have a UQ2 so I cant speak to its interoperability with that, but my PC receives and sends to the 2i. I can disconnect the PC and use the 2i Amazon direct inbuilt app. I can down load hires files.

Just a thought. Have you checked your settings. There is a setting for download quality.

Edit. I can also use the ipad and amazon hd app on there with no issues.
My Android phone also works when out in the car. I can play my saved playlists or search and play something new and then Bluetooth to my car head unit.

Which device and which app version? 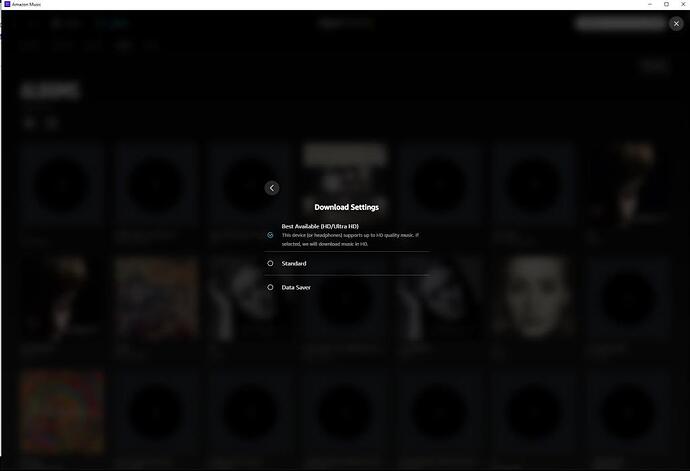 Edit: I have just checked and the PC, iPad and the Samsung Android phone all show similar settings in the Amazon HD app for each.

Ah! Although I clicked the 4 mth HD deal it wasn’t activated, so downloading as previous SD app settings. Now sorted.
Lets see how long a download takes now on my 130mbps wifi … back in a bit …

So, Ultra HD enabled.
Downloading ‘Ultra HD Jazz’ playlist, 77 songs.
15 mins in and two songs downloaded.
Checked wifi speed again, 135mbps.
Not sure what size these files are but does this sound right?
Might try the app on my fast pc to see if its a phone issue?

I haven’t checked download speed as I know my line is wet string speed. I download overnight, just set a few albums and leave it.

With the streaming I can stream all qualities without dropouts, but some albums, I have mentioned Joni Mitchell stuff before, do drop out on 24/192. This isn’t the same for everything and it only occurs when I play directly from the 2i app. The general conclusion is that some album storage in the cloud, plus its route via Amazon and Bluesound may be a factor along with my slow internet. If I use the PC and the Amazon HD app without the 2i I don’t get the dropouts at all.

One other incredibly annoying thing about upgrading from amazon music to hd. If you have any free mp3 files downloaded from previous cd or lp purchases the HD app will play them rather than HD content from the cloud. You will need to delete them from the app library. I chose to move mine to a new folder and then dowloaded the higher res versions via amazon HD.

After further investigation its a phone issue.
Downloaded 24 track playlist in Ultra HD onto pc in 3 minutes, thats 2.8GB.
Next question is, could I then transfer from pc to phone and still play through the android app?
Tried upnp’ing Amazon Music from pc to Unitiqute … no joy, grrrr.

I think the problem with the Amazon downloads is that unless you buy them they are in a proprietary format that only the Amazon app can access. UPNP doesn’t then access them.
If you buy them they are only in cd quality at the moment.
I doubt if you can transfer the proprietary files downloaded to a pc on to the phone for much the same reason.
However if your phone has a good download contract ( or you have a network internet connection) then all of your playlists and library tracks are available from the cloud via your phone (or ipad).

Life was so simple back then 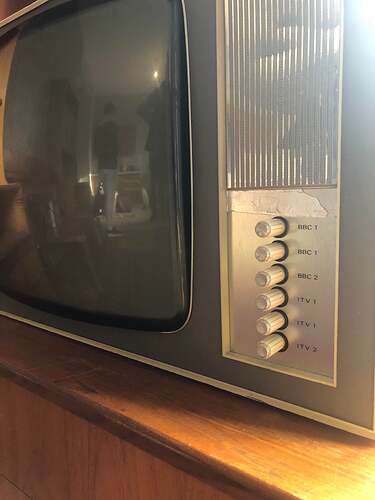 We had that at one place we lived, in a valley with no TV signal, radio signal wasn’t that good either. I think we also had one or two radio stations as well as the 3 TV channels.

Bought a faster ‘A2’ micro sd card, its helped, not pc speed but it’ll do!