Any work arounds for Radio Paradise on Tunein?

I have a Linn DS for multi-room streaming and Radio Paradise is currently not available in the UK.
Although my main system using a Naim HDX2 is fine (using VTuner) the Linn (using Tunein) is not.
Does anyone have a workaround?

It’s odd that TuneIn doesn’t support Radio Paradise. I don’t know what the input options are on Linn streamers for casting, but maybe you can use AirPlay or Chromecast from the RP app. This certainly works on Naim streamers, or you can connect an iOS device to the USB port.
Other options you could explore are MinimStreamer, LMS or Roon. There’s a fighting chance that you’ll be able to use one of these to get the lossless FLAC or ALAC streams, too. 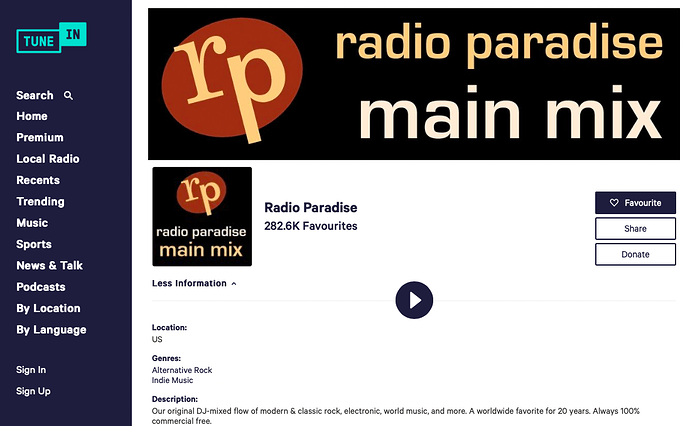 It’s to do with performance rights and an argument with Sony and Tunein Radio that it can’t currently be played in the UK I believe.
Good idea to play from the app and cast / airplay, although not as convenient as my current “press a button and it plays”.
Thanks for the ideas.

Isn’t TuneIn Radio slowly rebranding itself as Airable? I can say for certain that Radio Paradise is available on the latter; I listen every day using my Lindemann Limetree Bridge which has the Airable service built-in.

I have no idea about “rebranding” and Airable but Airable isn’t available on the Linn DS, so I’m still stuck, apart from using Airplay from the VTuner web site.

Or use the RP app to airplay? Benefits are alac replay and live info.

I normally listen to Radio Paradise on my Naim Muso Qb, and so it has been a while since I have attempted to listen to it on my Linn Klimax DS system.

Annoying! As always, you don’t miss something until it’s gone - now I’m sure that Joni Mitchell (fine songwriter as she is) could come up with a catchy little song about this.

As @ChrisSU suggested above, set them up as playlists using Minimserver.

The Radio Paradise app works well thanks for the suggestion

I’d have to look into that as I’m not that clued up on tech.

You can choose where “it looks like” your location is using a vpn, i work with people from all over the world here in Germany and they use these services to watch the services they have subscribed to in Japan, USA, South America, UK etc

I understand the idea behind VPN but have never used one and don’t even know where to start.
I’m actually hopeful that Tunein might come to an agreement with the companies involved and be able to broadcast Radio Paradise to the UK in the near future.
It’s clearly doable, as V-Tuner is still broadcasting RP.
Presumably V-Tuner are paying “someone” to be able to broadcast RP.

I didn’t either read some reviews and asked around work, tried NordVPN and took a sub. Map comes up and choose the country. Never had an issue.

I have used VPNs in the past in order to access UK based Internet sites whilst abroad. In these instances I simply fired up the VPN (with a UK location) and left it connected for all of my Internet access needs.

However, it would be a bit of a pain to set up a VPN tunnel specifically for Radio Paradise. It would be necessary to switch it on (with a different region connection) in order to access Radio Paradise, but switch it off for all other Internet use where a local (UK) location is necessary.

So for example, it wouldn’t be easy to access the UK version of the BBC Website whilst listening to Radio Paradise in the background.

Use a .m3u file to create a playlist and save it on your NAS to stream with minimserver on your NAS.

Here are the file paths for all of RP’s FLAC streams and a couple more:

Thank you for assisting but, with my level of knowledge, you might as well be speaking to me in Swahili…

I can understand your feeling here! Still, those Radio Paradise links are to the URLs that you can use to access their lossless FLAC streams, which do sound better than the regular 320 streams.
This doesn’t help with your Linn streamer, but it’s quite easy to add them to a Naim streamer, and I would recommend any RP listeners with current gen. Naim streamers to give it a go.