Anyone with shower pump knowledge on the forum?

We’ve had an ongoing saga since bathrooms refitted 6 months ago and I’m looking to see if anyone knowledgeable here can offer some guidance please ?!?!

I know nothing about plumbing, might as well all be in an alien language…

We have two showers, each used to have it’s own Aqualiser pump within the shower. All was well.

Since re-fitting carried out by a bathroom installer, we now have a single shower pump, a Salamander CT30 situated by the hot water tank, feeding the two showers.

The first when fitted was much noisier than we expected but worked OK. However it got noisier and noisier and was starting to sound like a bag of spanners before it failed 4 months in, it just stopped working/seized and was scorching to the touch, so assumed it was a wrong-un from the start and eventually lunched itself somehow.

Replacement obtained, fitted by installer and was fine, much quieter from the off and sounded like our old Aqualiser pumps, which made me wonder why our installer didn’t figure the first one was duff from the outset…However within a couple of weeks, the new one got louder and louder, like a loud scraping noise. The fitter was away on another job so I contacted Salamander helpline, who started asking me lots of questions I didn’t know answers to and eventually I just referred them to the installer while he was away. After he talked to them they’ve sent a replacement pump, the third now.

Now the pump to me seems louder than the last (2nd) one did when it was newly installed (making a louder than expected rattly pump noise which you can hear downstairs) though not as bad as the first. It’s also getting very hot to the touch, very quickly, which doesn’t strike me as a good thing. I don’t think the last (2nd) one got this hot, though I never went to check it.

So, does anyone here know about these things, can tell me if they are generally this noisy and are supposed to get this hot?? I have no confidence in the installer’s opinion.

We have one for our hot water, it sits near the hot water tank and runs whenever hot water is needed.
Yes it’s rattles but I sit it on a foam pad so it’s decoupled from the concrete floor, and so you don’t really notice it running inside the cupboard.
Can’t comment on the heat, I can check.
We had a salamander which eventually was replaced due to failing seals, not really the pump itself but the short flexi attachments. It was there for 12 ish years so the plumber recommended replacing the whole kit, and he connected it more effectively than before (different plumber). We now have one from Stuart Turner.

OK Cheers. Yep mine is sat on a salamander pad with Vibrapods(!) added below each foot.

Does it have 4 pipings i.e. is a twin pump for both hot and cold or just the hot from the tank?

If the units are running hot in whatever configuration, this suggests a pressure imbalance on either side of the flow - perhaps on the incoming mains which is being pulled in to the tank and trying to replenish same/or feed the mixer on the other side.

Hi Jamie , you’re pump needs to be as close to your Hot water tank as possible as I remember . I had a Stuart Turner 3 Bar Monsoon Twin for many years which was superb and never struggled pushing up 2 Floors . I think they have pumps that can pull and push IIRC .

Stuart Turner are probably the leaders with Shower pumps and will give wonderful advice . They are about the same price as a certain (superb) electric switch .

Yep, it has two pairs of pipes…One of these 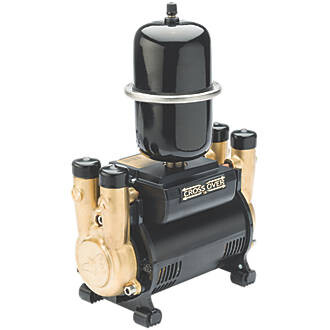 I think a quick read of this (which looks interpretable in most part) would be of benefit. I suspect your pipings aren’t optimal/you may even be drawing air (in the water) in to the pump?

I think it’s a case of the installer going back to square 1 and checking the whole install - and doing the maths.

I had a pumped shower which required the retro-fit of a 2nd cold water tank, as the pump emptied the existing one far too quickly.

Is it the same spec (Bar) as your previous Aqualisa ? The Pump I had would never be described as quiet but its sound didn’t change with age . I wish I still had it tbh but changed to a Mains fed hot water tank .
Is yours pumping to a higher floor ? It could possibly be overworked .

Probably won’t want to hear this, but I would install a mains pressure hot water system. They are indirect. Alternatively, Combis are probably more economical if the boiler is likely to need replacing, and will feed one shower with some reduction if there is hot needed elsewhere.

Nothing wrong with the boiler and have been advised not to touch it (they don’t make them like this anymore etc.) and previous shower pumps were absolutely fine for ten years! The showers work fine, pressure is good, flow is good, temperature adjustment absolutely spot on.

However I can’t believe the pump should be this noisy (it gets a ‘Quiet Mark’(!)) and get that hot, so I’m convinced the installer is cocking something up because he’s not sure what he’s doing, possibly along the lines of james_n’s suggestion above, though he came recommended and has apparently installed loads before now…

We have had a Salamander shower pump for the last 10 years, sits on some carpet to dampen any noise. It replaced a Salamander of indeterminate age……was in the house when we bought it. I wonder if Salamander have reps in the area that could take a look?

OK, is it noisy and does it get hot to the touch??

No not noisy and not hot.

IMO, you have taken a step backwards. You have downgraded. From 2 separate Aqualisa power showers - to a single Salamander pump, feeding 2 non-power showers.

I have a single, hot only Salamader (a CT55XTRA) - and have had 2 break on me. If its noisy, it could be air in the system (which will likely kill the pump, eventually). When I installed my latest pump - (bought used on eBay - a lot cheaper) - it took me ages to properly purge the system of air & get it working correctly. It now fairly quiet.

I tried to get rid of the Salamader, but failed - 3 times - to get a ‘professional’ to actually take on the challenge. So I gave up, and fitted another Salamander pump, myself. My guess is that it too, will fail, in due course.

In my experience, your Salamander pump will get hot - it has hot water going through it. It will make some noise - but not excessive.

IMHO, you have a bad installation (probably driven by cost) - which just doesnt suit the single Salamander pump. You should look to moving back to 2 separate Aqualisa power showers. Expensive, but Better.

PS. Ideally each Aqualisa should have its own 555PS…

Yes I now in retrospect wish we’d replaced with two similar units. Wasn’t a cost driven choice (we’ve spent more than enough on these bloody bathrooms) but one of neatness, my wife preferring a rain shower with separate head and having a little more room in the showers themselves.

I’ll chill out overnight and message installer to tomorrow morning for his comments and if ness. get back on to Salamander.

There are versions of Aqualisa’s which put the pump up in the roof, above the shower. That’s the version I was looking at, at one point.

Your problem lies with your Installer. Who has your money. And has (IMO) done a crap job. Not Cool.

Talk to Salamander, by all means. Maybe a change to the pipework feeding the pump, could improve matters…? Thats where I would look.

One more thing Jamie - when I was digging around for info when we had issues, hot water temperature into the pump was also checked. IIRC it needed to be below 65deg C but this may vary with manufacturer. Good luck with getting yours sorted out anyway.