Need some help with my Core please, before i contact tech support.

Background to system: S’nait 2, NDX 1 (one of the last, if not the, last off the line

now, these CDs were ripped on the unitiserve and originally resided in the Music store of that device but is the fact they are now in the downloads folder of the Core at the heart of the issue or, is there something else going on that prevents the app ‘seeing’ the tracks that are clearly visible when the downloads folder is viewed from our computer.

any help appreciated as to what might fix this, before asking tech support.

Have you enabled the download folder to be visible?

Hi, I am not sure what i would need to do do ensure it is however, it must be as i can see within the app and play from the app, all my beatles files that are stored in the downloads folder…

I’m not entirely sure that I understand your explanation of the problem, but I think you are saying that the Core works fine for its own rips and for files that you put into the downloads folder manually, but the transfer of files from your macbook didn’t work properly and you can see the folders inside the downloads folders but not any files in the folders?

You may need to rebuild the Core’s database after doing this, but it doesn’t take too long to do.

I suspect that in moving the files from the US to a non-Naim device, then back to the Core, you have lost the Metadata, due to way in which the Naim ripper/servers store it. You could put a metadata editor on your Mac, and have a look at the files to check this.
Do you still have access to the Unitiserve, as the easiest way to sort this would be to start again from there.

Chris
The OP does say that he moved the US on. And if it was just lost metadata then he would still be able to see the music files in the folders with his macbook.
Best
David

I think he’s saying that he can see it on his Mac. The OP says “…album folder and all sub folder tracks showing in the downloads folder when viewed via MacBook ‘finder’…

Thanks for the replies - to clarify, I can see the downloads folder, album folders, and tracks in album sub folders when viewing via my MacBook, so the files exist but within the app, I can only see the album folder and no tracks.

The only files I can see in both the downloads folder AND the app are the ones I transferred from The Beatles USB, so the metadata theory makes sense.

Whats the best / easiest way to try and restore this?

Yes well I now think Chris is right about the metadata as being the source of the problem, although if they are WAV they should show up in the app even without metadata.

Assuming you don’t have the Unitiserve or that you can get it but it doesn’t have your files anymore, then ripping the CDs again with the Core is probably the easiest thing. You could edit the metadata on the files in your Core’s downloads folder using dbpoweramp or similar but if there are a lot of them it will be quite tedious I guess.
Best
David

Do you have access to the Unitiserve, or has it now gone forever?

Can you check each folder that you have moved and see if appart from tracks you can identify the following files: 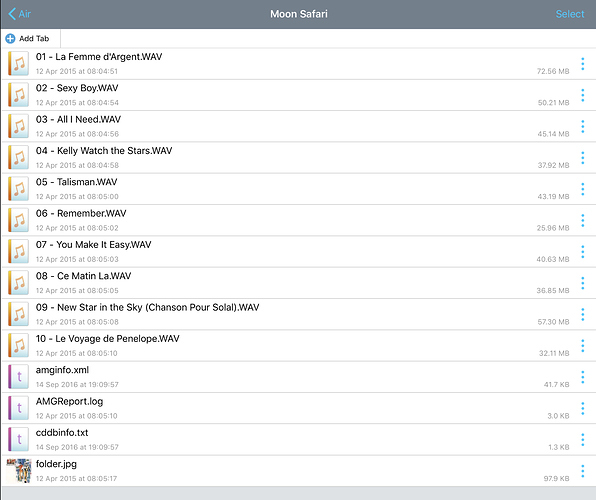 Hi, the US has gone forever and some of the CDs were loaned to me, so the files are ‘it’

At work at the mo but will look at the structure as detailed this evening.

In that case you may need to add the metadata back in, have a look at an OSX app called Metadatics to really see what’s going on with the metadata and to add to it. 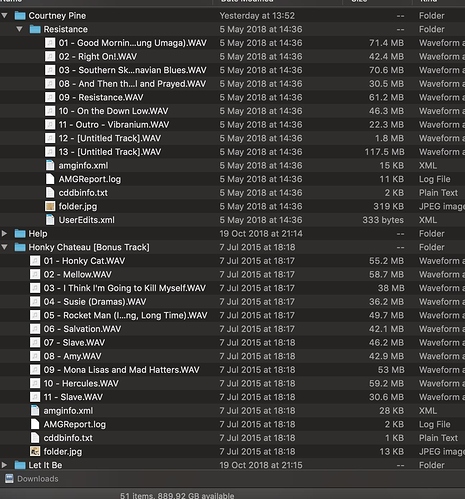 what has surprised me is that the elton john is visible and plays via the app with all tracks visible but the courtney pine is showing no tracks within the app, as per the screenshot from my iPad below: 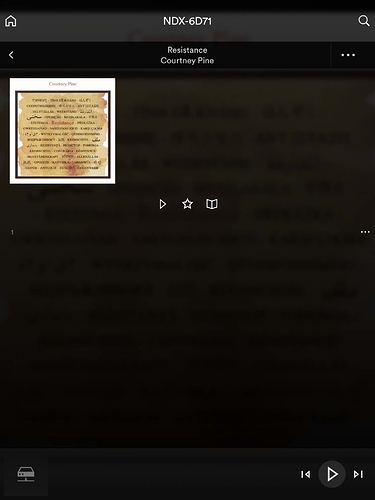 so, perplexed is an appropriate description i think

There is a way, provided one knows exactly what one is doing.

This way the Core should recognise the old rip as one of its own and simply index it.

By RIP folder Adam, I think you mean the Music/MQ folder in the Core’s music store … to be pedantic?

Regarding the move of US ripped music to a Core MQ folder, prepare to be disappointed.

I did this a couple of years ago and it didn’t go well. The Core adds files to the album folder that are different to what the US did. Therefore, when I added those album folders to the Core MQ, they never appeared right in the Naim app. As I may recall, they ended up as “Unknown Tracks” in the “U” Artists folder in the app.
I used dbpoweramp to reformat them as FLAC (and embedded the cover art, obviously) and stuck them in the Download folder. THAT fixed the issue once and for all.
So, user beware. Although I should mention that the Core software has changed in the meantime and may be more accommodating.

That is why I suggested a test

Thank you all - will try this evening but, isn’t the MQ / music folder restricted to naim staff or is there a way around this ? ( I access via finder as a ‘guest’ on my own network which works fine for the downloads folder but not sure about the music folder …???