No offense meant to anybody, but my opinion is yes. When I started out in this hobby many years ago, I bought an AV receiver and a 5.1 setup. Such clutter with the wiring and 5 speakers plus a subwoofer, it created.
After a few years, I tested my rig only in stereo. A good stereo setup produces a “phantom” center and places the voices (for music and movies) straight in the center. I went back and forth between activating the center channel and the two front mains and could not tell a difference! Actually, the 2 channel stereo sounded better.
I then found this article that explains it well:

Not for me,I much prefer a centre speaker! Tried it with just plain stereo, I found dialogue became a bit vague and especially when actors mumble a bit.

So the centre speaker stays put.

No offense taken, but I think your key quote is ‘many years ago’. I had a Naim AV2 for many years, the centre channel powered by a 145 into a Neat MFC. Naim haven’t pursued AV, so I switched to an Arcam Processor last year. I assure you with the new codecs such as Atmos, as a movie lover it really is superb

Not so sure the idea holds true with big screens. My main speakers are either side of a 12ft wide screen, and main sitting position is about 11ft from eyes to screen, so the mains a a bit wide apart for a convincing phantom centre. Also, if the centre speaker is ‘voiced ‘ more for speech, curtailing lowest and possibly highest frequencies, dialogue may be clearer than if sent through neutral wide-spectrum mains.

I don’t miss the centre speaker at all in my system. Years ago I fitted two in wall speakers either side of the fireplace with wiring also in situ for a future centre speaker. Also 2 ceiling rear speakers were fitted. I would have fitted an in wall centre speaker above the fireplace but I was concerned it would be damaged by the heat, so it never happened. My Cambridge CXR 120 receiver has been programmed for 4.1 and sounds great. The Ovator400s in the picture are not part of the av system. 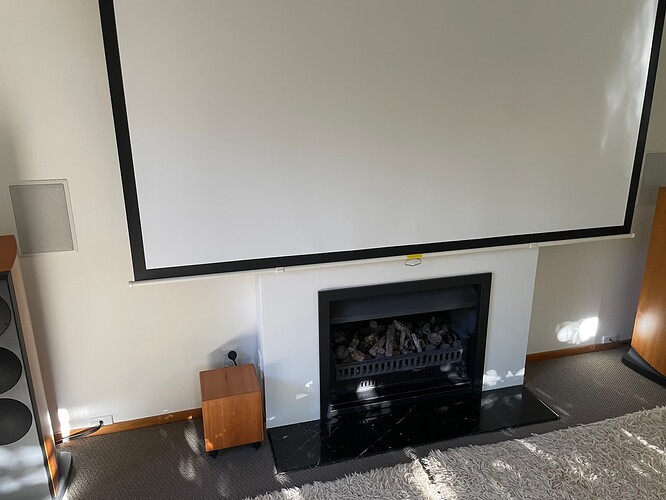 A few years ago I might have agreed with you. At that time I used a JBL MR Centre, which was well reviewed at the time. All too often I found that I preferred the sound with the centre channel switched to ‘Phantom’, so that the centre signal was delivered to the main fronts.
When I replaced the JBLs with a Naim N-Cent, a centre speaker of much higher quality and with similar characteristics to my stereo’s Naim Ariva speakers, that situation changed and the sound became much more seamless. I now find that switching the centre channel out results in a far less satisfying sound, particularly with regards to dialogue. 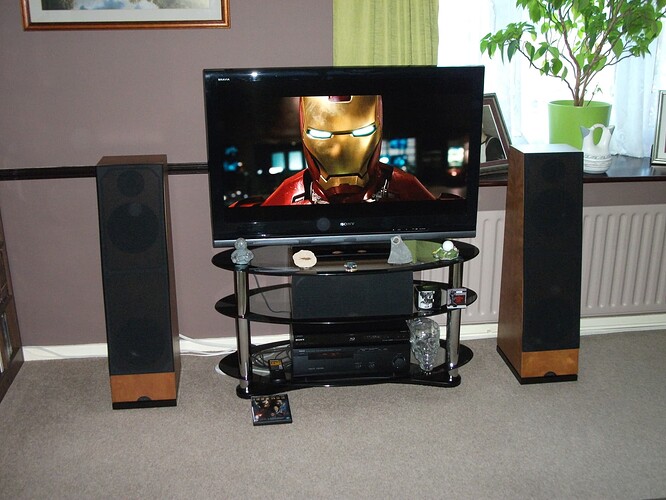 I think a lot of people prefer the centre speaker for voice audio clarity, especially for Brit programs that have very realistic sound recording. An example of which is when the characters are on a street having a conversation and a bus goes by. British tele doesn’t cancel out the bus sound, they leave it in and that’s one of the reasons that Brit TV is more engaging than, say, American TV.

The phantom channel is fine if you’ve got just one viewing position. The centre phantom totally falls apart if you have a family viewing room with sofas and chairs in multiple places. It can even fall apart for people sitting on the left or right of the sofa instead of dead middle if the speakers have a narrow off axis response.

The best home cinema I ever had (and I’ve had a few including a THX setup) was with Bose 901s for the main stereo pair and no centre speaker. They just didn’t need it. Voices were from a massive wall of sound regardless of seating position. That system was just plain old Pro Logic from the mid 90s where the rears were not full range and in mono, but I’ve never had that scale and bombast since.

2.0 is easier to do.
Front 3.0 depends, as with all set ups, on balance of speakers used rears/satellite imo are not so important.
If you can do 5.1 (or more) that provides most benefit for tv/movies to me.
As with most things hifi, for me, it depends, so no.
The ability of new stereo streamer/dac/amps have made 2.0 a serious alternative to having a dedicated av receiver though.

Love my 5.1 setup. A reasonable center image is created with a stereo rig for the ideal listening position. With a 5.1 system center is always center regardless of where one is seated.

Hi.
I found out using subwoofer between speakers ( kudos super 20 ) to be helpful. Subwoofer ( sumiko s. 10 ) is connected to receiver ( arcam avr 450 ) with high level connection. Front l&r go to 282 from pre outs. Subwoofer is lifted 30 cm from the floor.
The sub gives feeling of more even front and larger sound.
Regards Hannu