Firmware v 3.8.3 just appeared on the app for download.

I didn’t receive this…

Perhaps @Richard.Dane and @Will know more. It is possible that a test version has ended being distributed inadvertently.

In the meantime I would disregard until someone from Naim directs otherwise.

edit - checking, my Nova is on the beta version - surprising though that there has been no prior announcement from Naim, I expect something will be forthcoming soon - still best to await a notice here on the forum.

That is likely an earlier public version. Are you able to post a pic of the firmware update screen per chance?

I am getting the same message 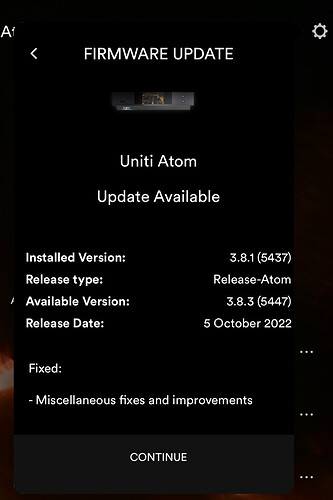 Intriguing. I just checked for my Star and no update is shown, well not yet.

I wonder if for some reason the Atom is getting an additional update before other products due to a specific issue with the unitiAtom? Another alternative is that we are all about to get one soon and for some reason, the Atom one has slipped out early.

Yes, Naim usually drop an email announcement regarding the firmware update and Richard adds a post on here with the details. I am holding off for now.

I saw this update on my Atom, but not on NDX2. Out of curiosity (or possibly stupidity) I ran the update, and it seems to work. I was half expecting to see a Focal logo on the screen, but fortunately it seems to be normal.
Although the Atom works, the app was unable to see it so I had to run through the setup routine again.

Yep, that’s the one i’ve got

We have released a 3.8.3 patch release for Uniti Atom only. This release contains a minor stability update for users of late 2022 Uniti Atoms only.

Users of earlier Uniti Atoms are welcome to install the release or disregard it.

got the update on my atom. Im hesitant to update it though considering the issues each new update seems to create. At the moment my atom is working fine once more like it was when i first got it.

Is this update for the Atom HE? When I check for updates, my HE reports up to date with v3.7………?

Thanks for any thoughts.

I refer you to Will’s post a few up from this one.

Hi all, We have released a 3.8.3 patch release for Uniti Atom only. This release contains a minor stability update for users of late 2022 Uniti Atoms only. Users of earlier Uniti Atoms are welcome to install the release or disregard it. Many thanks, Will

Thanks David, Saw that but remained somewhat confused - when is an Atom not an Atom, answer - when it’s an HE. Never quite sure how much of the HE is the Atom, but, by inference, not so much.

Obvious answer really is to check for updates and if none shown, leave well alone

I think as Will said it’s a stability release for late 2022 Atoms and it’s optional for other Atoms, unless you have a late production Atom that has an odd problem, then don’t worry if it’s not being offered to you! You will get it eventually if it’s at all relevant as it will be incorporated into the general firmware from now on.

The differences between the HE and regular Atom arein the preamp and outputs, not the streaming board.