Any ideas if I’m missing the obvious here? Got the dealers Atom HE at home for a trial and I can’t seem to get it set up. Not had a Naim streamer before but I’m usually ok with these things! It seems to have an issue with wifi. During the setup process the app says follow the options on the atom until you get to the settings icon, but then the atom isn’t appearing in the app screen. Just gives the manual setup option on the atom screen and then it can’t find the network when it searches.
It’s definitely in range, have reset to factory settings etc. I can’t try Ethernet, thanks in advance

It’s been a while since I set up a Nova, but what you described seems different to what the online setup instructions say. You didn’t mention if you tapped “Set up new product” in the app as per the instructions, and then tapped the “Uniti Atom, Star & Nova” option, then “Next” and then “Wireless”? Then the Atom should show up - but it doesn’t for you? 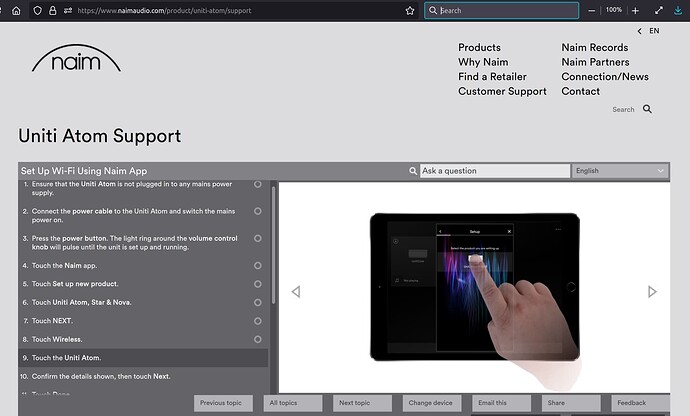 Is the mobile device with the app in the same network? I.e.,

But then, it seems that it falls back to using the Atom screen for setup instead, and obviously this fails as well. To me, all of this seems to be pointing to some kind of wifi issue. If I was you, I’d carry it to the router and try with a cable, if only for now

Might be a stupid thought, but did you allow the App to access your network devices? I know you can block this in iOS, probably in Android as well. Might be worth checking.

And indeed, they need to be connected both to the same network.

And then all it says on the atom screen is this. It will only let me pic the manual setup option and then it can’t find the network 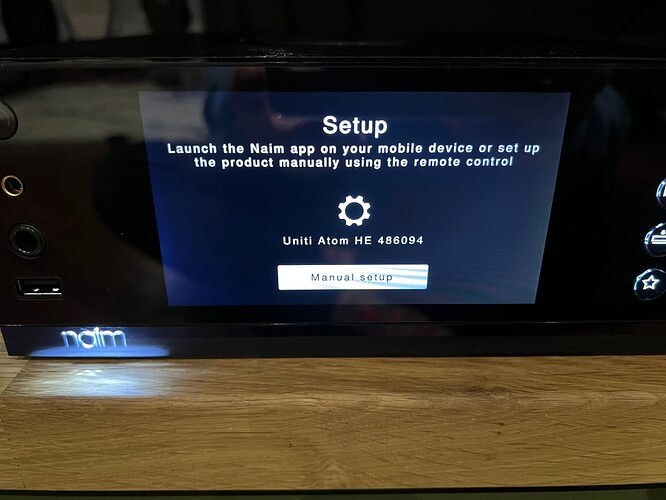 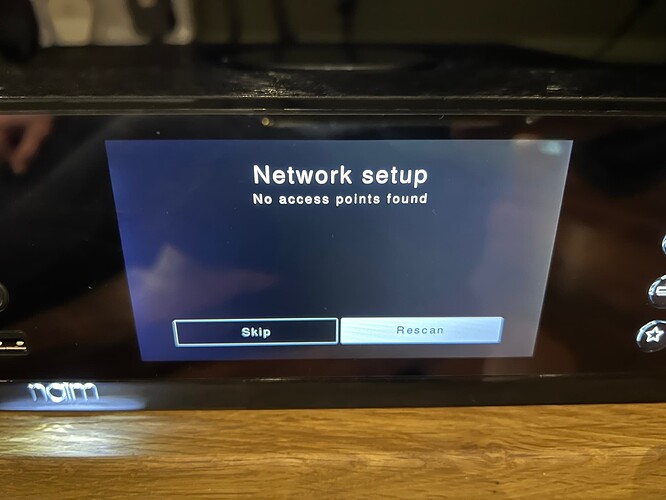 I think the problem clearly is, as you suspected, that it does not find the wifi at all, that’s why in the app you don’t get the choice, and in the screen on the unit it eventually fails with “no access points found”. Question is, then, why the hell

I have no idea, assuming that your wifi works. What’s your wifi setup?

In the app on the new product setup screen (I think), is there a “Network Scan” option? It was added in a recent app update and is supposed to help with network issues. The general feedback for it was not great if the network is fine (for me it detected various “issues” that were not real), but maybe ift works better if there are actual problems. You could try and see what it says.

Thanks suedkiez, just a BT hub, nothing fancy but very reliable. I’ll speak to the dealer, not all is wasted as it will play flac off a usb for now

Many people here have BT hubs and they get good feedback, apart from the odd connectivity issue that occurred after an update here and there. You could make sure that the BT hub is on the latest update.

Has anybody else got connectivity issues for the Naim app (iOS) with BT Smart Hub 2? Intermittent loss of connectivity to my streamers. I previously reported this here and eventually it went away when BT sent a fix to the firmware. However, it seems to have come back, possibly since the last firmware update: Firmware version: v0.30.01.08093-BT Firmware updated: 12-Dec-2021 Workaround is to toggle the wi fi on the iOS device. This feels like a reversion of the dual band wi-fi cross-connect…

For any other users having connection issues with the app I came across this. Apologies if this has already been covered. BT is aware of an issue affecting users with BT Smart Hub 2 routers that causes problems with connecting to players in a wireless configuration. This is caused by a bug in the BT Smart Hub 2’s firmware (version V0.26.03.01286 ) which prevents devices on the 5GHz band from communicating with devices on the 2.4GHz band, and vice versa. Most of the affected users have iPhones r…

Will take a look at that post tomorrow, just done the network scan in the app and it came back very good

Enjoy your USB for now