Last weekend, the Zurich Swiss High End took place.
Many good things to put in the ear this year, including one that particularly fascinated me!
The Speakers Audio Note AN-J with an EAR V12, I found the way to trandmettre the intensity, the PRAT close to the best Naim system that I heard, with a lot of implication.
But here, after some information taken, it seems that these speakers are not a good association with Naim …
Opinions? 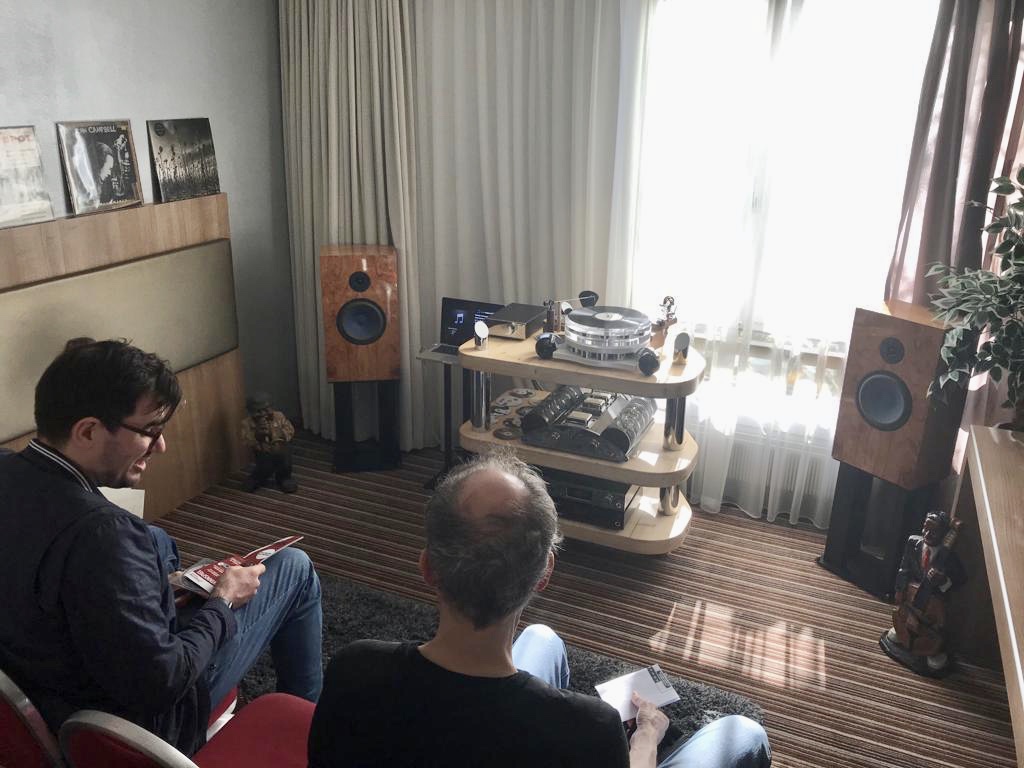 Audio Note Speakers have always intrigued me. Never seen or heard them in the flesh so I’m interested as well.

My local Naim dealer, Simon, has started carrying Audionote recently, he’s even sold a pair of Es to another NBL owner who didn’t need to replace his speakers. I’ve only heard them on the end of Audionote amps so far but have been impressed by the sense of scale they can generate, they made a good fist of Led Zep as well as the more expected classical and jazz fare. They do seem to need a bit of care setting their position to get them to work well, I’ve heard a ten foot guitar and booming bass while Simon was feeling his way with them but not for a while now.
To mark taking on the franchise the dealership held a demo day with some very high end AN kit, there was none of the “this recording’s not good enough for this system” going on that you get with some high end gear, the focus was more on the performance, you were aware of the recording quality but it wasn’t the centre of attention. They’re on the list if I were to need speakers, but I don’t.

Just to add that to my knowledge, AN are somewhat known for their willingness to use all types of music to demonstrate their systems, not just ubiquitous audiophile-friendly recordings and styles.

Tales tell of the head honcho putting Slayer on at a show, and I had them playing Noisia at Cranage earlier this year. A good sign of faith in their speakers, among other things.

I know at least one person using a relatively cheap Naim system with Audio Note speakers in a fairly limited space. His experience was enough to persuade his dealer to start exploring them. Naim works with all kind of things it theoretically ought not to.

I’ve asked a friend to pop over and leave some thoughts. He uses some higher end AN speakers which used to be powered by AN valve amps and his Pass amps, mainly. Following a visit to @MDS he bought a Naim NAP250DR, which is currently his amp of choice, in combination with a Townshend Allegri.

WRT EAR-Yoshino, these are some of my favourite amps and my main amps for years, currently 868 and 534 …but, I recently bought a pair of MkI SBLs. I liked these so much that I have had new MkII drivers fitted AND had a set of PXOs made using higher quality components. These are excellent and my friend persuaded me to plug in my old bolt together CB250s; using my Townshend Allegri as my main pre-amp. Blow me, I have NEVER heard the 250 sounding so good, in fact it has now become my power amp of choice …and, my friend will be bringing over his 250DR for me to have a listen.

The Audio Note Lounge is about a mile and a half from me in Hove and I’ve heard a couple of AN speakers there but only with matching amplification and they sounded extremely good in that context.

The liberals would never approve of the statue on the floor beneath the right speaker.

When the 250dr comes over if we have time I’ll do a back to back …BUT, this is HIGHLY context specific. With every other comparison I have done I have preferred the 534. It may be that if I was to slot the 868 in I would still prefer it. The Allegri is a superb line stage, and in this context with the SBLs (with uprated PXOs) I prefer the old 250; I am looking forward to trying the 250dr.

The old 250 is NOT a clear all round winner, and this gets quiet subtle, but as a for instance, I generally prefer the 534 vocals, and on the many less than stellar recordings out there the 534 makes a better fist of highlighting the positive.

This one does, you’re seeing race, I’m seeing musicians.

I dem’d a pair of AN-Ks on my Nait. The listening room was only just finished and not quite sorted but I did enjoy them. My only critisicm was that the top end was a bit too pronounced but so were the Russell Ks so probably caused by the room.

In the end I decided I wasn’t 100% convinced to pursue it with a home dem and decided to just play around in the sub-£1k used market for a bit. I don’t think I’ll try them again, even second hand, so perhaps that says it all.

I did buy some second hand AX2s much later but they are not my cup of tea. Lovely midrange, especially on some Ella or Sinatra, but they didn’t time or hold a tune well enough for the flat earther in me.

I am planning to home dem some RK Red 50s very soon though.

I auditioned some entry level AN with mid level pre and amps. Very nice midrange. But not enough grip and involvement.
However the amps were 8 watts audionote. So can’t predict with Naim.
They can be placed in corners. So no problems with rooms I feel.

When we get a chance I’ll bring the 250DR over and we can spin a few tunes together and compare.
On AN speakers I use a mainly AN system with a 4.1xDAC, Allegri and Naim 250DR and Audionote E/SP silver speakers with separate crossover. I like what the Naim does. It is fast, lively, pacey and the newer amps have a more even frequency response or international flavour as Martin Colloms called it. It is not the same as the Pass Labs or Allnic KT150 valves integrated and the Naim plays great music. It is not as ‘beautiful’ as the valves or as bland as some ‘monitor amps’ (not the Pass Labs) and for me that is great. It does not have a bright forward sharp sound with AN Es as some would tell you. It is actually pretty neutral. I would recommend you listen to the combo as some will prefer a more monitor speaker sound or a smoother more comfortable sound from Pass/Allnic. Yes awful recordings won’t sound nice but they will not be unlistenable. I would have not listened to the Allegri/Naim 250DR apart from MC’s recommendation and a few other reviewers singing their praise. They were right and they work with AN Es. Give it a go as I suspect I will be banned from AN and Naim for suggesting it.

I guess I should say I do a bit of reviewing hence all the gear.

Your loving the DR AND started a Naim owners section on the WAM - you have truly turned to the dark side!

I loved your system with the Pass amps, look forward to hearing it with the 250DR; your AN speakers sing.

Have you done the comparison between the 2.1 and 4.1 dacs?

I am surprised that Naim amps have such a polarising effect on people. Some love them, others hate them. Why? Naim amps are made in the UK, they are successful and the sound is now a lot more international as well as having the PRAT. So why the negativity? Hence starting the owners page for Naimees. Hey ho.

Always love the sound of audionote speakers at shows. Nearly bought some an j but that itch will have to wait a bit longer.

Next Wednesday I am going to a dealer about 4 hours away to audition a few British speakers. The Audionote AN-J SPe will be one of them. I will report back my impressions, my plan is to try driving them direct from a Chord TT2, given the 93 DB rating. Also, I will by trying several speakers with a Nagra integrated, and if possible, Naim gear, which he carries.

I am very curious to know how it can sound with Naim. Keep us informed

how did you get on no quarter?