Easiest solution is Roon with its equalizer.

Ahh yes, also that option. Although this might not maintain an even sound as the volume is increased for normal listening levels. Can you select different FR curves from your phone on roon? That might be a good way to solve the problem actually.

None of those 3 options address reduced hearing sensitivity to bass (and treble) at low volume.

I presume by loudness you mean an increase in the bass and treble to match the roll-off of human hearing as sound gets quieter? Re the muso, others have pointed out the option it has. I have often suggested that there is a case for that in full hifi systems but not with the crude on-off loudness button used on boomboxes and used to be found on cheaper hifi systems some years ago: Ideally there should be an option to switch in compensation that gradually changes the frequency response as the vo…

Proper bass at low volumes is the holy grail of hifi.

In my experience as my speakers have got larger, with the addition a big bass driver, and now with the addition of powered bass sections, I have got much better bass, and bass presence, at low volumes. Why does this have anything to do with reduced hearing sensitivity ?

This was the OP’s issue?

I want to increase the bass at low volume levels as I’m finding some tracks/cds/streams “Tinny”.

I’m not entirely sure of the point you were trying to make but any one of, or a combination of, the options I suggested will improve bass at low volumes if done in the right way.

Sometimes I come in after a late shift when everyone is in bed and put the stereo on. I get great bass presence at low volume. Like vol. 14/15 on the Atom. Really helps me wind down after a busy shift in emergency. I never used to be able to do it due to lack of bass as the op states.

None of those 3 options address reduced hearing sensitivity to bass (and treble) at low volume.

I think the RME ADI-2 DAC/Preamp is a great option for this, it has a programmable DSP / parametric EQ for different sound levels. Below is an example of how this can be used to lift bass and treble more (relatively) when the total output volume drops: 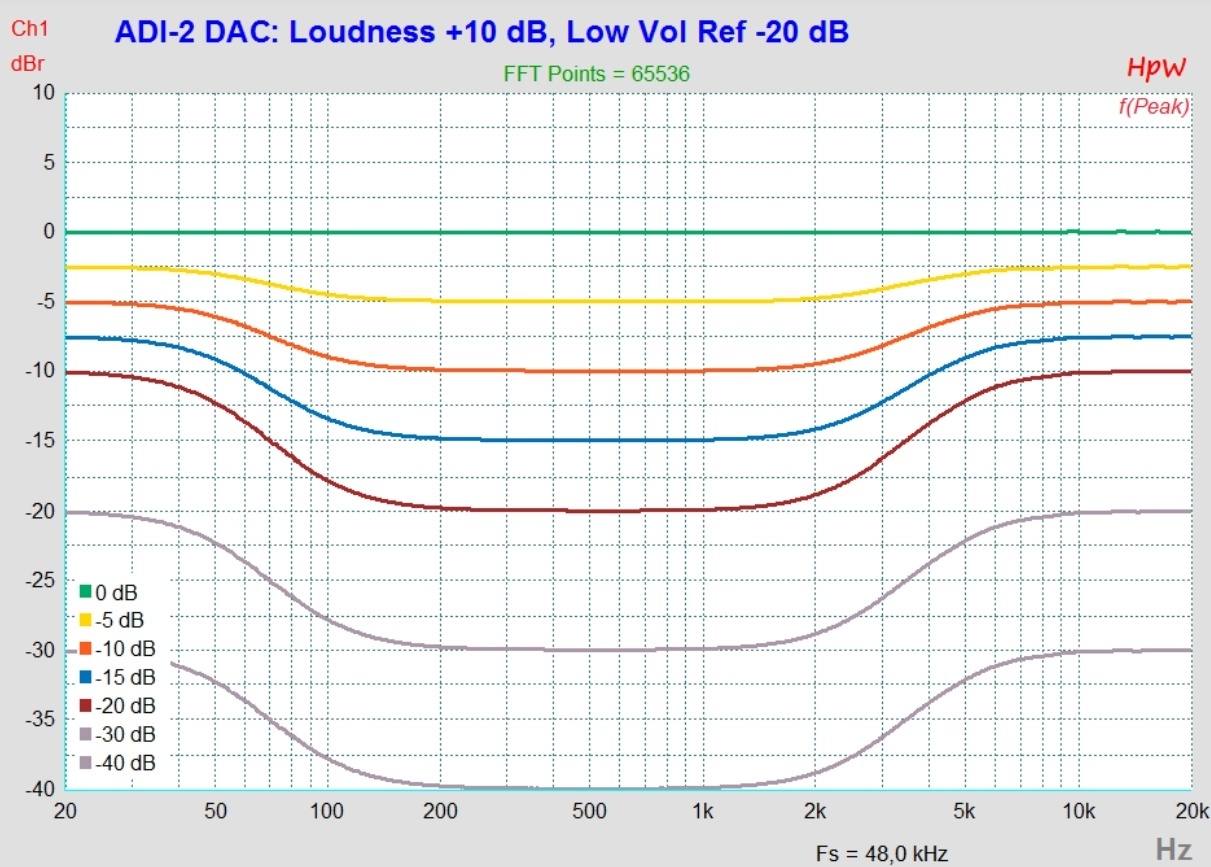 “ First, the RS8s offer unusually extended frequency response, with bass that reaches down into the midto- low 30Hz range and treble that extends beyond audibility. They also have quite good driver integration, with crossover points for the most part seamless. They, along with other affordable new near-full-range speakers such as Revel’s Concerta F12s, dispel the myth that full-range sound has to cost the earth. Second, the RS8s offer spacious imaging (though traces of treble “zing” occasionally peek through) with good image height and width. They also produce deep soundstages that consistently draw favorable comments from guest listeners.

Third, the RS8s are easy to drive, and so work well with moderately powered, moderately priced electronics. They also sound dynamically alive, so you may find yourself playing them at higher volumes than you would (or could) with most competing speakers. The RS8s are downright happy playing ebullient jazz and rock material; they did a fantastic job of capturing the exuberant, punchy sound of “Vertigo” from U2’s How to Dismantle an Atomic Bomb [Interscope].”

Maybe just get a nice sub and you might get that low level bass your after. Especially if you’re really happy with your speakers otherwise. It will just nicely reinforce your low end.

Maybe just get a nice sub and you might get that low level bass your after.

There are three distinct things, quite different:

One is speakers reproducing full range undiminished bass as low as there is any in the recording. That I believe is to what you are referring - as was my first post in this thread, and the solution is suitable full range speakers, or a sub with speakers less capable in the bass, of course with amplification able to drive and control.

The second is reproduction of bass at low listening levels, to be the same as a proportion of the music as it is when played at realistic levels through the same speakers. Regardless of whether the speakers reproduce the fullest bass, weaker bass (and, though generally less obvious, treble) is a natural phenomenon of the response of the human ear. That is what I was referring to in my last post - it appeared to be referenced in your post to which I replied, and was in someone else’s post prior to that.

The third is bass lacking in the recording. This appears to be the main thrust of the opening post, though later the factor of low listening levels was also introduced. The OP’s lament of ‘tone controls’ of one form or another able to tailor response with different records is the only solution that would resolve that (and then limited to increasing whatever is present to increase, and limited by tge crudeness or otherwise of the control).

Of course, in any particular instance two or all three of the above mayapply.

Absolutely agree with @litemotiv , I have had a RME ADI -2 fs DAC in my system as DAC pre for nearly a year now. It can provide Vol. control plus simple treble and bass control, or programmable ’loudness’ control or Five band parametric EQ. Performed in DSP. All variable or stored as presets on the remote. I use mine as simple room compensation to curb a room induced bass peak. Great bit of kit for modest outlay by Naim standards. If you don’t like what it does in your system you can always use it as a desk top headphone amp at which it excels. The DSP principle is effective and I am also tempted to try Dirac.

It doesn’t need to. If it is well integrated it will just aid in moving more air at any volume meaning you hear more low frequencies. The OP’s speakers likely roll off earlier than he assumes. It will aid in a flatter response down to 30-25 at least.

Yes - though not as sophisticated and balanced as my suggestion, and requires that preamp.

For me, getting the full range speakers made problem 2 & 3 no longer an issue.

Full range speakers alone, whatever the type or how implemented won’t provide more bass as volume setting is reduced, nor more bass when the recording rolls it off…

Never said they did. But they are flatter in their response in the lower registers giving more bass presence when the volume is low. Try to understand what I’m trying to say it’s quite simple. Low frequency roll off gets more evident the lower the volume goes.

33hz, as listed, is more likely -6db point. Giving flat response from 40hz. All I’m saying is if he had a sub to fill in down to 30 then he probably wouldn’t have the issue of not having enough bass at low volumes.