I have just replaced the CR2032 battery in my 2010 HDX for the first time. I have a PS/2 keyboard and VGA monitor. When the HDX boots, I get this screen on the VGA monitor: 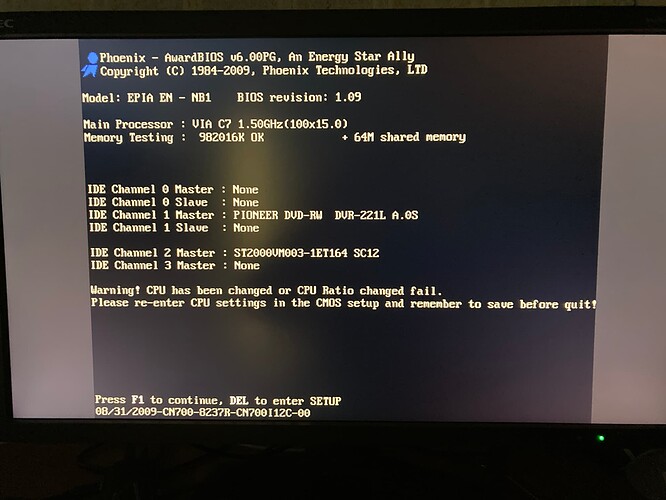 If I press F1, the HDX boots up fine and I get the usual screen on the front of the HDX (which is mirrored on the VGA monitor). The HDX appears in the n-serve app, and on the network, and can play music.

If I gently shut down the HDX (remote control then power switch), turn it back on and instead I choose DEL, the VGA monitor goes blank, the HDX screen says “Starting…” and I can just hear the HDX drive quietly rattling away. The HDX doesn’t appear on the network. I left it overnight and in the morning the HDX still said “Starting…”, i.e. nothing seems to have happened.

I’m stuck- can anyone help please?

The last time someone met this problem, it turned out they were pressing the wrong Del key on the keyboard. So try pressing the other one to the one you have been pressing!

The DEL key above the direction arrows is the correct one to use. I suspect that your chosen monitor is having trouble displaying the screen resolution of the BIOS screen.
Do you have an alternative monitor available to try?

Thank you @NeilS . I tried another monitor (a TV) but with the same exact same result. BTW I’m using a VGA to HDMI adapter with supports resolutions up to 1920x1080@60Hz (1080p Full HD) including 720p, 1600x1200, 1280x1024. The original monitor was a NEC MultiSync PA272 which displays the first screen on HDX start up, but simply reports no HDMI signal as soon as I press the DEL key. Could the adapter be the problem? Regards.

Ok, lets try to do this blind - don’t worry, the BIOS is pretty well locked down, so unlikely to do any harm if it goes wrong.
Switch the unit on with your monitor connected & press the delete key above the direction arrows when you reach the CMOS error screen you posted above.
Give it 10 seconds or so.
Using the direction arrow keys:
Press right once.
Press down three times.
Press Return.
Press the Y key.
Press return.
Direction down arrow once.
Press return twice.

Hopefully the unit should then boot up.
Then shutdown & restart.
If the unit then boots without issue, then use the Naim menu system to set the date & time.

Well played Neil! Worked a charm first time. Thanks so much!

Great service anytime but especially late on a Friday evening.

It’s the first time I’ve suggested doing it blind Sloop - now it’s tried & tested, hopefully others may find it useful in the future.