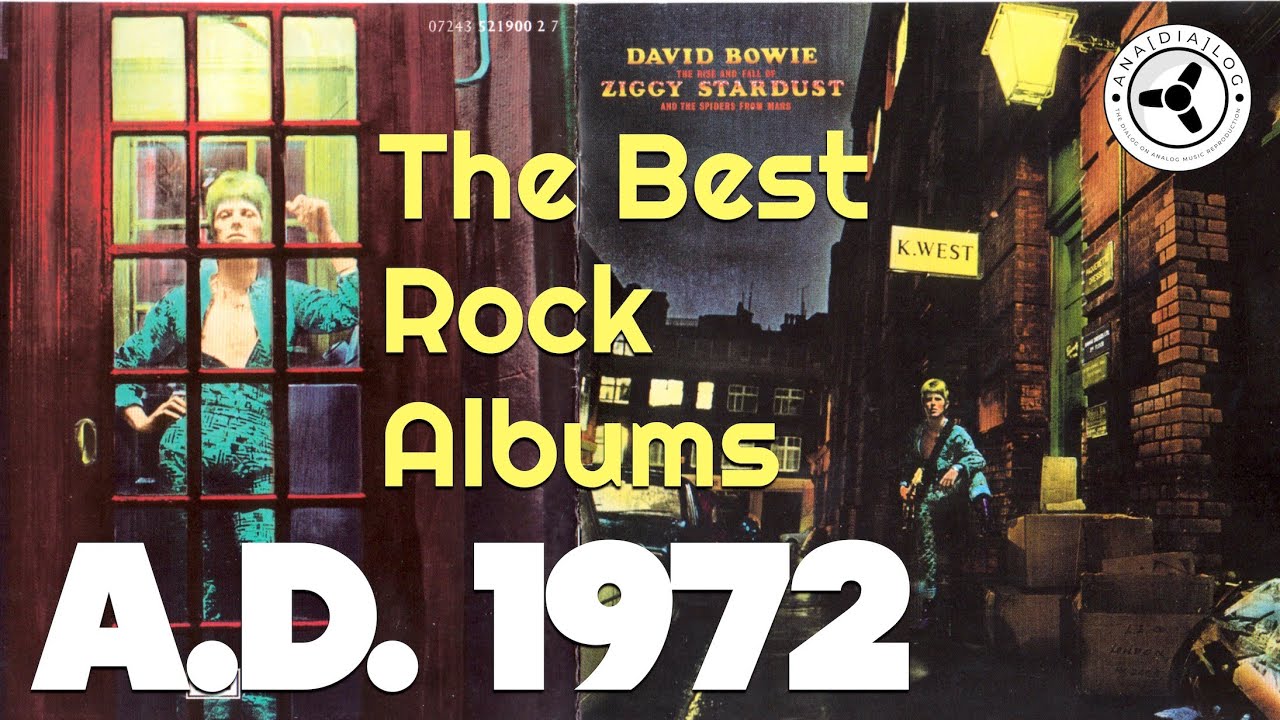 I was only 6 back then and on,y have 2 of them: Machine Head and Harvest, both great records.

Hmm Lots to choose from.

These 3 are probably my favourites along with Ziggy that you already mentioned.

Love Nick Drake - Pink Moon also but not sure it counts as a rock album.

In no particular order:

Catch Bull at Four
Caravanserai
Pink Moon (If allowed as ‘rock’, see above)
Exile On Main Street
Harvest
Close To The Edge
Argus - perhaps my choice, if limited to one
Thick As A Brick
Greetings From LA (TB’s swansong)
Europe '72 - probably released later
Transformer

I’m sure that, if I were to look at my LPs and CDs, I’d find a few more. It was a pretty good vintage, though.

This thread is so last year… it was covered then!

With the recent 50th anniversary of Bowie’s Ziggy Stardust I thought about what other albums from 1972 I enjoy, the more I looked the more 1972 seems like an outstanding musical year. Lots of talent across many genres, possibly due to no recording software and musical ability still counted above artist looks… So much to choose from currently re enjoying this [image] And these [image] [image] [image] Do you have a 50 year favourite? Just so many to choose from…….

I’m quite happy to do it every year - until I fall off my perch.

Roderick David Stewart sued one of our national newspapers for libel many years ago, and I acted for the newspaper publishers in defence of the action. He was married at the time to a woman known endearingly as ‘Alanna The Piranha’.

I’ve never had any time for the man since, although ‘Every Picture Tells A Story’ is a good album.

Funny how that album title proved so very true in the seeing off of his libel action!

He still got a knighthood😂

… and joins a long list of unworthy recipients of such honours.

I just listen to the music, and i rarely believe the press.

I have these (most bought during that year)

There is of course this thread, not limited to rock:

With the recent 50th anniversary of Bowie’s Ziggy Stardust I thought about what other albums from 1972 I enjoy, the more I looked the more 1972 seems like an outstanding musical year. Lots of talent across many genres, possibly due to no recording software and musical ability still counted above artist looks… So much to choose from currently re enjoying this [image] And these [image] [image] [image] Do you have a 50 year favourite? Just so many to choose from…….

having carnal knowledge of groupies

I was under the distinct impression that that was the norm, and was what groupies existed for - and where the term “what happens on the road stays on the road” came from, and so I assume that 90+% of rock musicians, at least in those days, lived like that - and where they had partners, in many cases said partners either didn’t want to know, or accepted it. I wouldn’t reject a musician’s music on the basis of his or her accepting the offerings of groupies when on the road, even though it is not behaviour I condone, and avoided when as a rock DJ I discovered that DJs also get the same offers…

Of course, it is wrong to then attempt to sue for libel if a newspaper exposes the behavious.

What Rod Stewart got up to with groupies doesn’t (and didn’t) worry me greatly, although the groupies were pretty despicable.

It was the hypocrisy of the man that rankled at the time - and still does when I think back to it now. Yet another man (in a long list headed by weasels such as Robert Maxwell and Asia Nadir) who thought that they could do what they wanted by throwing money at expensive lawyers to get their way over people less able to pay.

I had dealings with Maxwell and Nadir (and others) who were no better than weasels in human form.

There is a problem with the way that libel laws work in this country, as the usual burden proof is reversed.

A libel claimant need only show that he/she/it (a company) has suffered detriment in the minds of right-thinking members of society generally, in order to get an action off the ground.

It is the defendant/respondent who has to prove, in written pleadings and later in Court (if the case goes to trial), that what he/she/it published is ‘justified’ (that is, that it is true).

I’ll leave it there, as Members will have better things to do on New Year’s Day.

Needless to say, it’s all much more complex than this, but I’ve tried to give a short summary. Please don’t construe any of this as legal advice to be followed.

And prominant supporter of Celtic

So he’s not all bad.

Some faves from 1972, in no particular order: