Interesting, as that was the SACD I enjoyed most on my old Sony 777ES - that’s the big one with the sliding lid. However, when I initially auditioned Naim’s CD555 with the standard CD version I’m afraid the CD555 just blew it away! Hence why I now own a CD555 and why I’m quite happy, for the moment, with standard CD resolution.

I have a lot of vinyl and a reasonably well loaded LP12 and that’s about the only source that can sound better than the CD555 but that’s only with a handful of well mastered LP’s!

Naim’s CD555 with the standard CD version I’m afraid the CD555 just blew it away!

I’ve been really enjoying SACD over the last year since getting a Sony UHD Blu-ray player that can play SACDs as well. Re-releases of 1970s quadrophonic mixes on SACD have been particularly fun, such as Donald Byrd or Tomita.

I’m deeply irritated that prices for s/h SACDs from 20 years ago are now so high (DM’s Violator, for example). Surely it’s worth someone knocking out a small run of discs at a price level that might be deemed merely Very High, as opposed to the Bowel-Shattering prices I’m seeing online?

I haven’t yet done much direct comparison between SACD and CD layers, mainly due to enjoying the multichannel mixes so much, I’ve had little interest in the 2.0 DSD layers. I probably should give it a try…

I’ve had little interest in the 2.0 DSD layers. I probably should give it a try…

For me it’s the opposite Mark – I have no interest in multichannel mixes, I have no way of playing them, but I like the punchy, rather “analogue” sound of DSD in stereo…

Just sampled Mahler 5th on Channel Classics last night. Far too soon to be sure, but it may be the best sounding symphony recording I’ve ever heard.

Miles Davis on Sony and MFSL. Just picked up the 4 channel Bitches Brew. Now I need a surround system on which to play it.

My own set up is stereo with a subwoofer but a good friend has a wonderful surround system, so for my Beck, Pink Floyd et al I have been startled to hear how fantastic they sound in multichannel too.

I’m moving house in a few weeks and I’ll be able to add surround capability to my set up, mostly I initially thought for films with my teens to enjoy, but now also some multichannel audio.

Looking forward to it. 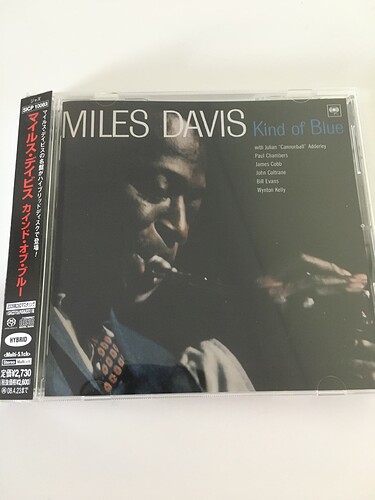 This sounds more engaging and fuller than the recent UHQR vinyl press. Which has actually been returned because one side was severely marred by crackle and noise. So maybe not a far comparison to the SACD.

I should put in a shout-out for Pure Audio Blu Rays as well. These are like SACD in that they offer multichannel (or just 2.0) music at very quality - high bit depths and sampling frequencies rather than DSD - but they play on (I think) pretty much any normal Blu-Ray player.

They have a website of their own but are available through the normal channels. I would recommend Kraftwerk, John Williams in Vienna or Lost Voices of Hagia Sofia, depending on your musical taste.

When I downsample a hires PCM file to 16/44 and run it on my Lumin/Accuphase system, I typically hear very little difference, if any. 1-bit SACD generally sounds a bit different, but not always better. Where possible, I try to source SACDs; but I’m considering sticking to 16/44 or DSD for downloads.

I just got my first SACD player and getting familiar. I got a Yamaha CD-S1000. Shortly I will dig into the above reccos and start my collection. My buddy gifted the player to me, along with a few choice discs from his collection. He recommends:

I’ve just recently set up my first surround system and Dark Side of The Moon is superb sounding in 5.1.
I had the SACD of it already but could only play the 2ch until now, the surround sound mix is so good.

A friend loaned me the Blu Ray audio version from the Immersion box set, and that’s (marginally) even better to my ears.