I have the Chord S6 mains block connected to the wall socket via a Chord Epic cable. Due to the extreme stiffness of this cable I opted to purchase three Naim Powerlines rather than Chord cables to connect to the equipment from the block. This has worked out very well - the Powerlines sound really excellent nearly two weeks into burning in.

It has got me thinking that perhaps I would prefer a Powerline feeding the block instead of the Chord Epic cable. Obviously the Powerline IEC is a C13 and the block takes a C16. I think getting a Powerline and having the IEC changed is a mistake as one then loses an important component in the Powerline construction, ie. the specially designed decoupled IEC. So what about using an adapter? They certainly exist, but would they have a degrading effect and are there any of particularly high quality that anyone could recommend? Or would it indeed just be better to replace the C13 on the Powerline with something like a Furutech C16? What are people’s thoughts?

I would have thought the primary benefit of the IEC decoupling would be seen at the connection with the equipment, which is sensitive to micro vibrations. I wouldn’t have thought it would make much difference going into the power block, especially if you are using power lines from the block and are mechanically decoupled twice more.

No experience from it but well respected power cable maker Shunyata sell SR-Z cable adapter that goes from C14 to C19. Might be worth a trial if you have a reseller available. 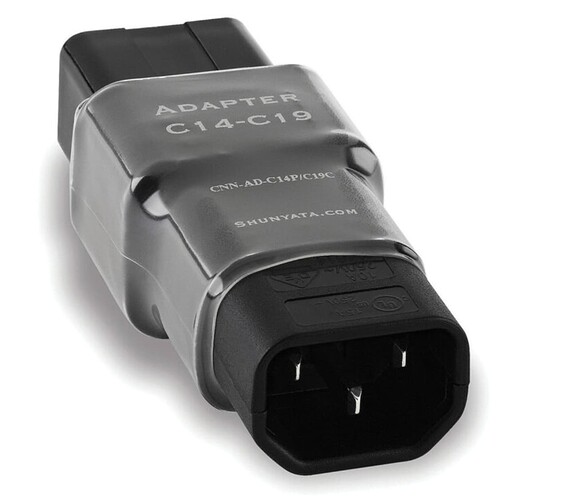 Thanks. This seems like a good option even though rather expensive - over $200 in the US! Haven’t managed to find a UK seller yet.

You make a good point here. That being the case then replacing the Powerline IEC would make sense.

It seems a shame to remove a perfectly good Powerline IEC connector from a new cable. Why not make up a C14 to C19 adapter yourself and see what you think ?

On reflection I’m inclined to agree and to abandon the idea. The Shunyata Adapter costs around £200, so not exactly cheap. £10 ones can be had from Amazon but are most likely just tat. Then again - who knows?

Replacing the IEC with a top quality Furutech one is going to cost well in excess of £250 including the labour charge. That’s if I can even find any dealer who will agree to commit the heresy of doing it…

I could but I particularly like the Powerlines - that’s the whole point.

If you can wire a plug you really don’t need a dealer to do the work.

It should be a simple job to open the Naim IEC and remove it. Attaching the cable to the new plug should be just as easy. If you aren’t confident I’m sure you have a friend (or someone on this forum) who’d do it for you for less than a dealer would charge; as I say, it isn’t difficult.

Removing the IEC, which is really the heart of the PowerLine, would seem rather daft. If the PowerLine was so important it would probably have been better to buy a block that would take them, such as the excellent MusicWorks. If it were me I’d stick with the Chord cable. If it being visible was irritating - and it’s certainly something that would rule it out for me - I’d get a PowerLine and ditch the Chord block.

I believe the c13 is 10amp and the c16 is 15amp for the UK.
Often you will find those monster, power hungry mega watt power amps with the larger c16, with the end user having to source the appropriate power cables.
You could ask Naim if they could make up a powerline with the larger termination.
Personally I would look for a suitable beefed up power cable with a c16/9.

I wouldn’t use a Powerline to connect a block to the wall - I believe it’s only a 4mm2 (just over 2mm diameter) cable and although I don’t know what’s inside the Chord block it may be better and wired with a larger gauge (or one would hope so), in which case a Powerline might actually be a bottleneck. To my understanding it’s meant more to connect individual components?
That said I am not sure what the Chord Epic wiring is either, so I would suggest trying a larger, ideally even a solid core one, if possible?

The PowerLine is excellent when used between the wall and the block. It’s only a stereo you are running, not a factory.

I don’t disagree that a 4mm2 cable (or even much less) is electrically safe and perfectly capable of powering a home stereo. Apologies for not making it clearer to start with.

Yes I could do it myself you’re right. Certainly that would save a packet in labour charge.

It’s only a stereo you are running, not a factory.

I always thought you were one to advocate over specifying things.

In retrospect I’m inclined to agree that mutilating a £600+ cable is rather silly. I’ve managed to build a small two level rack out of Ikea bamboo chopping boards and some Quadraspire rack uprights and this now sits next to the Quadraspire rack right in the corner with the Chord block on top and an Atlas block on the lower level for Blu ray player, Apple TV box, floor lamp and Melco optical drive (ripper) plugged into the block via a switched Masterplug 3 way cube adapter!

The Chord cable is visible but not really an eye-sore due to it’s location. I bought the Chord block originally as (1) it sounded so good at the dem and (2) I use Chord cables throughout the system. Only when I actually got the Chord Epic mains cable did I realise that it’s so insanely stiff that using 3 more to connect from the block to CD player, Melco (Plixir) PSU and Moon amp would be virtually impossible. Hence the 3 Powerlines which have made an incredible improvement over the previous 3 Chord C Power cables. I’m so taken by what the Powerlines have done and by it’s flexibility and that’s why I wanted one on the block. But it isn’t to be.

Knowing what I now know then I may have possibly opted for a MusicWorks block and used Powerlines throughout. Having said that I’m sure that the Chord block is fundamental to the overall performance I’m getting so no doubt it’s worked out for the best. Also I simply don’t have the funds to keep junking stuff and replacing it as we’re now living on our pensions.

I’ve junked too much already. Before getting the Moon amp and Klipsch speakers I bought some Graham Slee amps and a pair of Spendor Classic 4/5 speakers. I’d convinced myself for some reason that I wanted the ‘BBC type sound’. What a mistake. My other half, who is not usually very fussy about the system, absolutely hated them, declaring them the most boring system she’s ever heard, bar a demo of some Bang & Olufsen speakers! I was forced to agree. Total waste of time and money so I really can’t afford to go there again.

The Chord Epic and Powerline are both well over-specified as far as current rating goes so not an issue. Either cable can be used to feed a distribution block no problem. I seriously doubt that either cable would be a bottleneck in terms of sound quality related to conductor size used with any mains block.