I did a blind test with my owl, Robert. Robert was crying when the sound was better, between two same cables, one new and the other fully burned in.
He was crying each time I was connecting the burn in cable. He was wearing dark sun glasses. 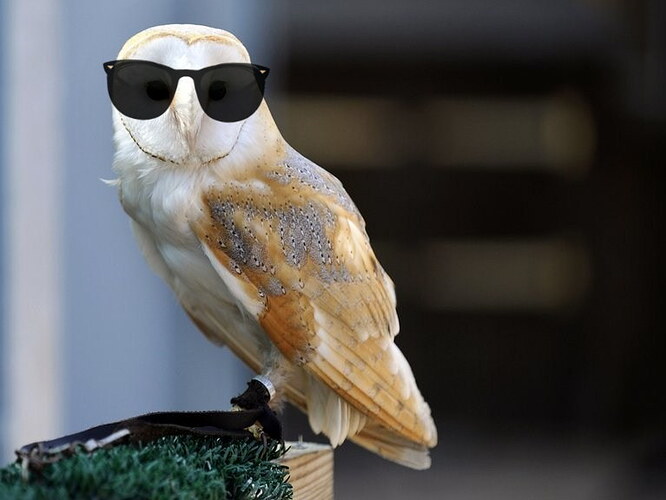 At the risk of going somewhat off topic, wouldn’t it be amazing if we could figure out how the brain receives and interprets audio signals, such that we could enable people with compromised hearing to listen to music.

We already do, the wife of a friend of mine was completely deaf since childhood but is able to hear (music) again with digital implants that directly stimulate her auditory cortex. Pretty amazing stuff!

If it does not exist, you do not need an explanation.

Now go fast to the patent office and register Robert!

People hearing burn-in does exist. We know that. We are trying to find out why. There are two main possibilities. Something in the cable changes over time which people who hear it almost universally find it is an improvement. In which case we want to find out what physical changes have occurred in the cable. Or, there are no changes to the cable, and the perceived change is in the mind/brain of those that hear a change. We already know that this sort of thing can happen, in many different situations, so arguably no further explanation is required.

Hi Friends, Last year I met Bob, an audiophile who challenged my assumptions about what is possible. My short documentary film, Listening, was made with the help of John DeVore (DeVore Fidelity), Erik Owen (Gig Harbor Audio) and several of my film professional friends. Please have a look and let me know what you think. It’s only 8 min. Thanks! [Listening]

Fantastic thread on this topic with a very inspiring video by @ChrisBell that I would like to recommend.

Electricity in a wire is pretty simple.

Why is copper wire more electrically conductive than aluminium wire?

Why does electric current cause wire to heat up?

Electrical conductivity can be defined as how much voltage is required to get an amount of electric current to flow. This is largely determined by the number of electrons in the outermost shells; these electrons determine the ease with which mobile electrons are generated.

Why are you asking me? I am not an electrical engineer nor am I a physicist.

Perhaps the reason you think electricity in a wire is pretty simple.

Sent with a little red hart.

Why does electric current cause wire to heat up?

For this second part:

Due to the wires having electrical resistance, which means that they resist the motion of electrons, the electrons bump into atoms on the outside of the wire, and some of their kinetic energy is given to the atoms as thermal energy. This thermal energy causes the wire to heat up.

Sure we could also say that entropy increases in the cable which causes the ambient temperature to rise.

But you can say: the transmission of electricity in a cable occurs with an increase of entropy.

Entropy increases as temperature increases . An increase in temperature means that the particles of the substance have greater kinetic energy. The faster-moving particles have more disorder than particles that are moving slowly at a lower temperature .

Or. Are the same number of electrons moving irrespective of current, but as the current increases they move a lot faster

Just to add to the mix, ears/brain complex is non linear, in a process of recruitment (making quieter sounds more perceptible).

Am I the only person who us seeing an ever widening gap between the actual effects of cable burn-in and this highly ‘scientific’ discussion?

Anyway, perhaps this will help to bring things back down to Earth: 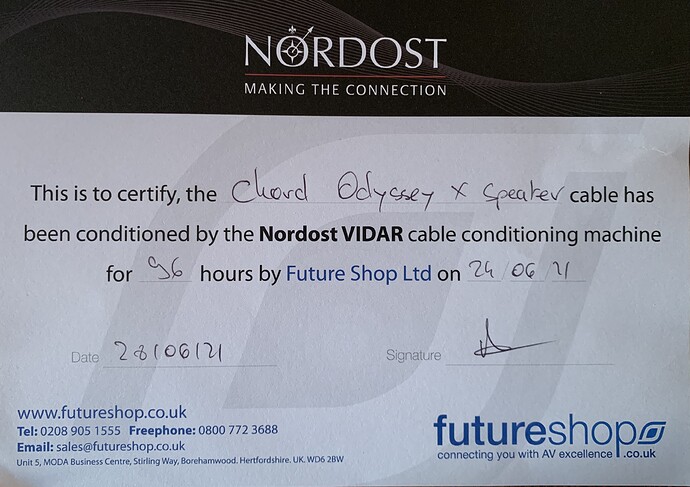 [edit] Serious addition: it appears that futureshop offers a cheap and simple way of testing the effects of burn-in, which is nice. Chord Odyssey X is only £30/m and the burn-in is free of charge, so it’s easy to get multiple pairs with and without burn-in applied.

I was buying the cable anyway, and the burn-in was free. Hopefully it won’t actually make the cable sound worse by sending all those electrons into hyperspace, so I figure there’s nothing to lose.