Can fiber improve vs lan cable

Continuing discussions about adding a fiber media converter, like Sonore , to audiophile switches, which began in the English Electric thread.
Listening impressions on adding a media converter vs straight ethernet cable from a switch.

Does it improve sound quality?

I’ve been running my LAN on fibre for a few years now, and it has worked flawlessly. I really didn’t want the clutter of extra FMCs and associated power supplies, so I run it between Cisco Catalyst switches which I need for connectivity anyway. It’s cheap and easy to set up.
As for sound quality, it’s been a while since I’ve even thought about it, but when I first set it up I replaced the fibre running to the switch near my streamer with Cat5e and it sounded the same. I didn’t spend a great deal if time checking this out, so I may revisit it at some point.

I would be curious to know if adding a Sonore optical will improve or not vs Etheregen/ linear ps.
The ER has optical out.

I have not tried this myself, but the only thing you do is changing the electrical signal into an optical equivalent. The only possible benefit I can see is that the fibre part of the LAN is not susceptible to any form of electrical interference and that you avoid grounding problems.

The signal however, gets converted from electrical, into optical and another time back to electrical … I think this only has benefits when talking about serious lengths of cable…

You have a point, although the idea of adding a pair of cheap FMCs and a short length of fibre has been kicking around for a few years now, and quite a few people seem to like it. Whether it technically improves the digital signal, or just changes (or even degrades) it in a way which is subjectively preferable is another matter. Then there’s the thorny issue of expectation bias…

Did it about a year ago. No intentions of going back.
Router>FMC>Cisco>Atom.
The only thing connected to the Cisco apart from the Atom is 3 NAS boxes which are only used for backups and not normally on.

I had before: Netgear > tp link X 2 > Nds. But later I found Cisco > Audioquest diamond > Nds to sound better.
However as Chrissu said, the tp link are cheap fmc converters.
Perhaps with Sonore one, connected in fiber to the Etheregen, or Cisco, it may outperform bare Etheregen or bare Cisco, or cascade Ciscos.

Indeed, the benefit of using fibre cable as opposed to twisted pair cable on your Ethernet segment is the removal of any sort of common mode noise from the switch.

The benefit of the line code clock stability from the switch, such as from an EE will be removed with the use of media converters, as the media converter going from the fibre cable to twisted pair cable back to the streamer will use its own line code modulation clock, and these do vary as in switches, from very stable to ok.

I do think unless your streamer device can accept optical transceivers any benefit is extremely environmental and variable.

The Sonore OpticalRendu streaming transport is one product I am aware of that does directly accept optical transceivers so can benefit from a true optical segment… be interesting to see if Naim go down this path in the future.

@JimDog, you have still some Ciscos at home probably. Will you try SFP to ER ?

Hi FR,
Cisco 2960 with SFP modules out via a decent fibre to an opticalRendu seems to work perfectly well and provides electrical isolation for the streamer from the rest of the network in all respects other than via power supply cables.

As SiS indicates though, it’s important to have a streamer with decent clock at the receiving end. Fortunately, the opticalRendu meets that criterion.

I wasn’t able to compare optical to ethernet in isolation, as the oR is optical only. However, what I can say from experience is that our server out via the Cisco & oR makes the M Scaler & DAVE sound altogether smoother, sweeter and easier on the ear than server out via the excellent Curious Cables USB direct to M Scaler.

Now as to which fibre, I was advised to go for Corning fibre and decent connectors. That’s about it until branded snake oil salesmen start rebranding the products, spraying them in mystique and adding two zeros to the price.

That’s about it until branded snake oil salesmen start rebranding the products, spraying them in mystique and adding two zeros to the price.

The benefit of the line code clock stability from the switch, such as from an EE will be removed with the use of media converters, as the media converter going from the fibre cable to twisted pair cable back to the streamer will use its own line code modulation clock

We then rely on the FMC’s clock. If the Sonore opticalModule was correctly designed, then it should do the trick.

Of course, we can’t assume of the design quality of those “audiophile” network components… It could be a good surprise, or not.

I really don’t get the cynical knocking of Sonore products as though they are too good to be true. Sonore’s business model is much leaner than that of a traditional hifi manufacturer such as Naim, so it doesn’t have to mark up the BOM cost of its products to cover the level of understandable overhead that a traditional manufacturer has.

Sonore’s sale prices are typically around 2 x BOM cost (according to them), so a £1200 opticalRendu has at least the BOM cost of a Naim streaming circuit (e.g. in the NDX2), once you have stripped away the cost of the Naim case, display circuitry and the dac module. Given this, we shouldn’t be too surprised that the kit works to a far higher level than the retail price might have us believe.

For those who pour doubt, cynicism & scorn over Sonore’s products, perhaps they might just try one and then be able to comment on the basis of personal experience. If they still don’t rate the Sonore kit, then they are free to return and receive a refund.

Perhaps this makes me a Sonore fanboy, I don’t know. If so, then I am also a Naim, DCS, MSB, ART, Vertere, Linn, Proac, PMC and Magico fanboy too.

We then rely on the FMC’s clock.

Have you tried the following?

I really don’t get the cynical knocking of Sonore products as though they are too good to be true.

I didn’t mean to be cynical. How could I? I have no experience with Sonore products.
But I tend to be cautious, especially with “audiophile” products (with vague specifications).

But I keep curious. A Sonore oM is on its way to Switzerland…

I have auditioned several Naim streamers but preferred alternatives.

Two different fiber set up are reviewed in Absolute sound: 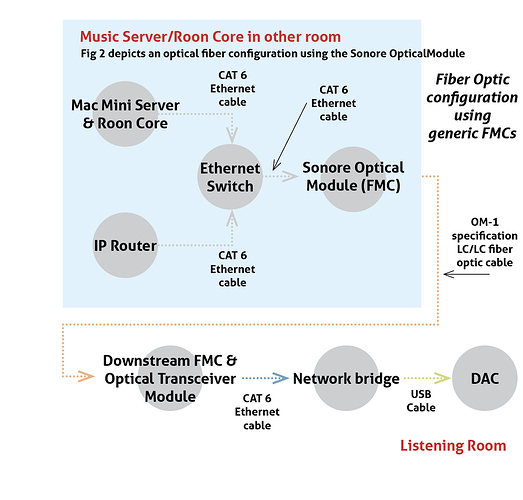 The conclusion of the Absolute sound review:

The advent of the Sonore OpticalModule in the market around this time provided yet another audible level of improvement with a fiber-optic-based network. The higher-specification clock (crystal oscillator) and power supply of the OpticalModule provides improved timing and lowers the noise floor more than generic FMCs, so you get a lot less of the bad stuff and lot more of the good stuff described above. Power the OpticalModule with a good linear power supply, e.g., an Uptone Audio LPS-1.2, and you’ll effectively have a state-of-the-art network system for digital streaming that will be clean, quiet, transparent, and lifelike.

The Wrap
We’ve come a long way with respect to digital music reproduction, particularly in the last five years. Streaming services like Tidal and Qobuz have become mainstream as viable sources of musical content, and components specifically designed for networking digital streaming have become available to provide superior-quality audio reproduction. We’re no longer limited to physical media and disc players, and the convenience and ease of use that streaming offers is matched by equipment and components that provide a concomitant level of superb audio performance. In my experience and in my system, this performance is best realized by direct network connections from streamer to DAC utilizing the advantages that a fiber-optic connection has over traditional copper Ethernet, including immunity from RF, EMI, and high-impedance leakage currents from SMPS and network component clocks that increase jitter and clock phase noise.

Everyone’s system is different, and the degree of benefits in any system can be tricky to assess, but the components and cabling for a basic configuration are inexpensive enough to try for yourself, and see if they work for you. They certainly worked very well in my system. If you like the results, and want to upgrade these networking components, there are now audio-application-specific fiber media convertors, e.g. the Sonore OpticalModule, and power supplies (e.g., the Uptone Audio LPS-1.2) that provide higher performance and audio quality. Moreover, if you find that you also need an audiophile-grade Ethernet switch, the AQVox and SOtM Ethernet switches have been on the market for over a year, and the recently released Uptone Audio EtherREGEN Ethernet switch shipped in Q4, 2019. The EtherREGEN not only provides much higher-quality audio performance than other Ethernet switches, but also supports fiber-optic connections