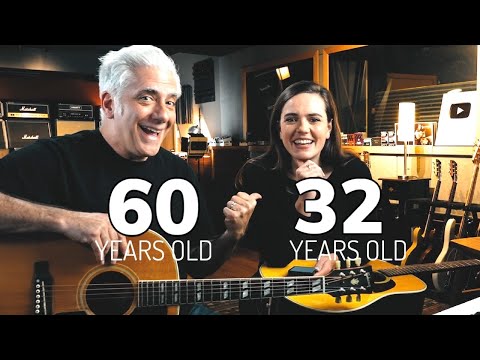 I haven’t watched the video, but I suppose it depends on the songs! Also, I guess, on music style prefer ces of the individuals. know that my sons, one in his late twenties other just into his thirties, like quite a few Beatles and Rollling Stones songs, amongst a few other things from the 60s and 70s.

For my part, I struggle to think of anything at all I like of “popular music” from before my time, though the thread question is “connect with” rather than like, and I can connect with a few songs like Vera Lynne’s The White Cliffs of Dover. Then there is opera, some of which my parents liked but I didn’t as a kid, but now do.

There is an interesting conversation about the lyrics. The past is a foreign land.

I’m pretty sure they can my 22 year old granddaughter loves the Beatles. Guess it’s more to do how much those youngster enjoy music, the more they do the more likely they’ll be open to new stuff both old and new.

Depends on the frame of reference. What constitutes old and how much older than who?

The majority of my collection is from the mid 60s to early 70s, I was born in '79 so most of my music predates me. Ergo I can connect with music a decade before I existed no problem. Can I connect with stuff from the 50s and early 60s? I find that very challenging. Generally due to two problems:

Bear in mind those are just generalisation. I wouldn’t say there are no exceptions. Obviously there are.

In this case the guys discuss currency that no longer exists, telephone operators and phone kiosks.

I know for myself that the first thing that hooks me is the tune. Lots of songs are full of nonsensical lyrics.

I think historical anachronisms in songs may even be a way for people to rediscover a past.

Depends on context. My children were born after 2000. They heard Nirvana on-line and I played MTV Unplugged in New York. Recorded 1994. I then played The Vaselines ‘Jesus wants me for a Sunbeam’ 1987
which surprised them into asking if this was a cover of Nirvana. It is a catchy song which helps. They have their own music, but I play Jack White who often sings old blues songs like ‘I’m Shaking’ - lots of musicians listen and play older music.

I worked in Newcastle for a couple of years in the 1980s and there was a Rockabilly scene centred on a pub called The Bridge. I still play some 50s Rockabilly. Eventually Mrs Stokkie will ask me to play something else as it reminds her of her mother’s records. All long gone.

Now that kids no longer listen to radio, they are freed from the restrictive playlists used by most stations. They can discover Metal for themselves which was hardly ever played by radio DJs.

Eventually Mrs Stokkie will ask me to play something else as it reminds her of her mother’s records.

My mother’s records were primarily Jim Reeves, but I have kept a couple of them as mementos.

Operator by Jim Croce - what a great song.

Never made out the lyric “a guy she said she knew well and sometimes hated” about his best old ex-friend Ray.

Thanks for the video, I’ll listen to some Jim later today.

Great music endures, and the themes and pre-occupations of most music are pretty similar from whichever era. I think the issue is more older generations connecting with newer music. Younger folk tend to have the more open minds in my experience. Discuss!

I turned 70 this year. I actually listen to Ella and Frank more than I listen to the Beatles. However, I have a satisfactory (for me) collection of “classic rock.”

Several years ago, I discovered WFUV, a NYC based station that plays a wonderful mix of classic rock (including many album tracks) and contemporary “alt-rock.” A lot of singer/songwriter music. Groups like The Decemberists and The National. Virtually no pop, virtually no hip-hop. It awakened me to a lot of good music written today.

Younger folk tend to have the more open minds in my experience. Discuss!

Well you better cross Lou Reed off any list.

Although this doesn’t bother me at all and there is no prohibition against the use of any language in our house regardless of age, I have noticed that the use of colourful language seems to be incorrectly attributed to more modern music of the past 40 years or so. But this isn’t actually true. There was a lot of fairly mainstream stuff from the early 60s onward that really had no taboos here. By mainstream of course I mean sales popularity - it wasn’t getting radio air time for obvious reasons.

Early George Clinton and Frank Zappa were prime examples of this.

I agree it’s not the foul language that worries me it’s how it’s used. I have no problems with people swearing and have been known to use it occasionally.

Ian Dury used swearing and offensive language to good effect. ‘Spasticus Autisticus’ banned from airplay by suits who didn’t understand its political message and only heard taboo words.
‘Plaistow Patricia’ is deliberately offensive ‘pulling strokes and taking liberties’ - the lyrics could not be quoted here today.

For me a wonderful thing about the time we live in is that recorded music has now been created for 100 years or more and its all out there to be enjoyed. For example you can listen to Fats Waller (musical and comic genius!), Louis Amstrong, Benny Goodman, Dave Brubeck and Paul Desmond, The Modern Jazz Quartet etc. etc. and that’s just a tiny fraction of the Jazz field.
There are similar great recordings in all the other genres which reflect times long past and brings us right up to the present day. More recently music from other parts of the world has also become available. In fact there is so much good stuff that one life time is barely enough to appreciate it all so although most of the younger generation might not have got round to it yet I hope that many of them will eventually discover and enjoy it for themselves.

all the other genres which reflect times long past and brings us right up to the present day.

Except some genres go back less far in time, while some that existed at one time no longer do (though that depends on definition of ‘genre’ (e.g. classical a genre, or are the different classical styles such as baroque, romantic, etc genres?