I made my first download from Qobuz this morning. Maybe they thought that was enough, because I’m darned if if I can download a second. It’s made it to my shopping cart (apparently), but when I click on the cart icon I find myself in an endless shuttle between Qobuz - Unlimited music and downloading in 24-Bit Hi-Res. and Qobuz - High quality music - Unlimited streaming and Hi-Res download store.

Had to reboot my computer, but then it worked.

You might well have found that simply restarting your browser program would have fixed it too.

That I’d tried. But I should have tried rebooting before opening a thread.

Oh well I’m glad you got it sorted anyway.

Not quite, it appears. I have discovered that as soon as I sign out of Qobuz, the downloaded files disappear from my computer.

The only reason my first purchase worked is that I had moved the files to a different location before signing out (to add them to my file server location).

These are purchased files. I have the purchase summary. Is this “works as designed,” a bug, or “I have no idea”?

FYI - I have no streaming account with Qobuz if that makes any difference.

I have discovered that as soon as I sign out of Qobuz, the downloaded files disappear from my computer.

That’s impossible if properly downloaded by the browser

It’s not impossible. They were there. I saw them in the designated download folder. I could copy and move them. I can now play those copies.

Here are screenshots of the download directory before and after I logged out. Note that the CD1 folder disappeared entirely. 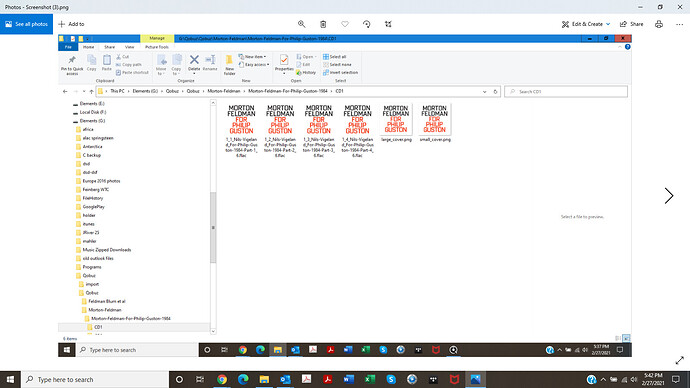 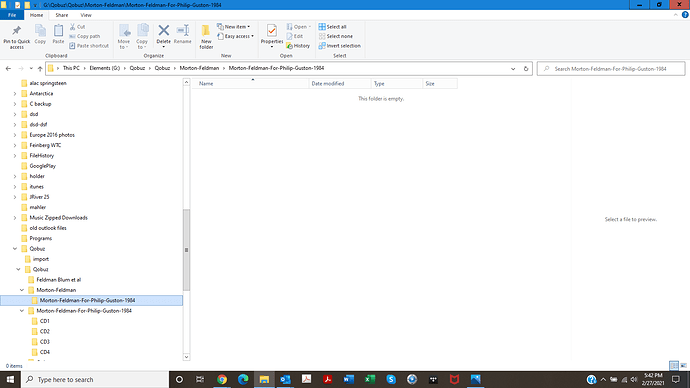 It is if properly downloaded. What is this path in your screenshots, “Elements: (G:)\Qobuz…”? A mounted external drive? Did you choose this path to download to in your browser? What’s your browser?

What do you mean, If it is properly downloaded"? The files were downloaded. I have copied them. I have played the copies. Until the originals disappear they reside on my 7TB g:\ drive, a self powered external USB drive, which is one of my music back-up drives.

I did not use a browser to download them this time. I did it with the Qobuz app. I also used the Qobuz app (previously) to designate the download path. G:\Qobuz\Qobuz. (Actually I think the Qobuz app added the second Qobuz.) You can see the whole path for the files if you enlarge the images.

What do you mean, If it is properly downloaded"

I meant when properly downloaded and under the control of your own computer, it is impossible that Qobuz accesses your files and deletes stuff.

I did not use a browser to download them this time. I did it with the Qobuz app.

So they are apparently not yet under the control of your own computer, but somehow still within a storage area that is controlled by the Qobuz app. I have no idea how this app stores files as I have never used it for this.

They are on my G:\ drive. I can move them. I can copy them. All of which I’ve stated before.

Your suggestion would make some sense if I had an account and was downloading music to listen to offline - but not purchasing it. In that case once my subscription expires, that music should disappear. One theory I have is that Qobuz is treating my music in that manner, but I don’t know why.

Look, if logging out from Qobuz in the app deletes these files, then the Qobuz app has control over the storage location, for whatever reason. Either copy them away from there like you did or see if you can change the Qobuz app configuration.

You’ll likely get a response from your post on the official qobuz support thread on audiophilestyle …,
My guess is, from the symptoms you describe, as you are logging out of the qobuz app, and the files disappear, then these are in fact (as far as the app is concerned) offline stored songs for replay rather than “purchased” songs to keep forever. I suspect as you’ve paid for them, the app allows you to store them for offline use too. There must be another option to download them to permanent storage.

The app settings distinguish between file locations for “download” and “import.” The files are going to the “download” location. I’m not even sure what “import” means in this context.

This seems to show these tracks as your offline library. They will therefore disappear when you log out from the app.
Are they also listed under “purchases”? They should be, from what you’ve described. 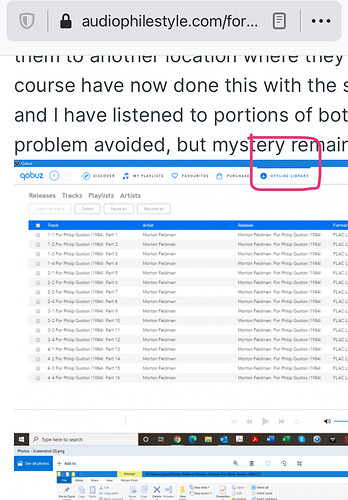 If you purchase an album - your Morton Feldman in this case - I think you must download using your computer. I download all mine as TAR files, then extract them and store them on the NAS. I think what you are doing is downloading them with the app into your offline library, which is a different thing. Try downloading with the computer and it should be ok. I have literally hundreds of Qobuz downloads and once downloaded they are yours to keep and move around at will.

This is from the “Purchases” tab in the Qobuz app for Windows. As you can see, I have two relevant choices, Download and Import. I have been choosing Download. This morning I tried Import, but the that takes me to the offline library tab. I’m pretty sure that’s NOT what I want.

In order to access my purchases through the browser I had to reboot my computer (again - see my first posts). Once I did so, I could navigate to my purchases and select one to download. As you can see, I had two choices, TAR or app. I chose the app, because that’s what I’m testing. They downloaded; they appeared in my files; and once again, as soon as I logged out, they vanished. 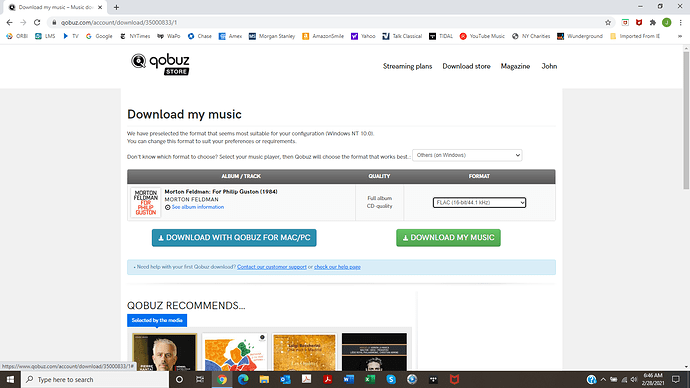 I do exactly the same, never fails.
But to be fair, the other www vendors seem to be a little slicker, no .tar files, & in more ways than just the download process.