CDI transport issues or is it the puck?

Hi…have a CDI and love it…although lately it’s been missing a beat or two. It can be improved by trying to re-arrange the 3 rubber o rings around the periphery of the puck.
The question I’m asking is “am I seeing the beginning of the end” of the CDI or is it just the puck that’s the issue? I’m on my second in 6 months!
I have too many CDs just to give them up and if Naim made a commensurate new version of that CD player I would probably just go and get it…
Help needed and thanks…

I cant advise on your particular machine, but I used to have a CDX2 and the pucks always seemed to be failing. I recall endlessly “turning” the little rubber rings on the underside to get the CD to spin properly. IMHO it was a design fault! (I will now run for cover)

My CDX2 “swallowed “ the puck , hasn’t done that in a while.

My guess is that it’s the puck, always mixed feelings about the puck as it seems to give a better and simpler entry for the disk than the traditional tray , but the pucks wear out ( six months seems to be a short time)

I would get another puck and see what happens

The clamp (or “puck” as it’s often called) was a really interesting Naim design. Really it had two rather conflicting roles in order to ensure that the drive would perform optimally; to hold the disc so it could be read while under extreme accelerations, while also providing some damping and decoupling from the platter/motor vibrations and presenting as little additional mass as possible.

I assume your CDI has the CD9 Pro mech with the Clamp 3?

Apart from a new clamp, you may find that a Clamp 5 as used on the VAM1202 players gives a lot of additional security. Just be careful because with a magnet in the actual clamp itself it can stick like a limpet to the hub on the older mechs and so care needs to betaken that it doesn’t tear the hub cap off. It does also potentially come with a small performance penalty, but at this age that may be a worthwhile trade-off. I’m a little ambivalent in giving it a full recommendation for those reasons, but it has been a solution for some who have found that as their mechs have aged and the proper clamps have been unable to work reliably any more.

Thank you for that Richard…but not sure what mechanism the player has but yes I think it is the clamp 3. Not sure what the clamp 5 looks like or indeed where to get it from…
I was thinking about giving the platter a wipe down to see if that improved things…would that be recommended?
Thanks
Chris

So is the nextel ring the small white coloured ring around the platter?

It’s the be textured ring around the edge of the hub.

I’d be very cautious about using blutak too for fear that it will lift off sections of the ridged friction ring on the platter. I have seen photos of CDS and early CDI machines (with the CDM4 mechanism) where there are bits missing, which were caused by blutak.

Yes, as Clive advises above, be gentle with the blu-tack as it can be very sticky and you don’t want to be removing the ring by accident.

My CDX2 still has its original mech & clamp and occasionally refuses to play some slightly out-of-spec discs - they slip when reading the TOC and the display just says Err.

The solution (as recommended by a well-respected Naim dealer) is to put strips of masking tape around the central hole to improve the grip: 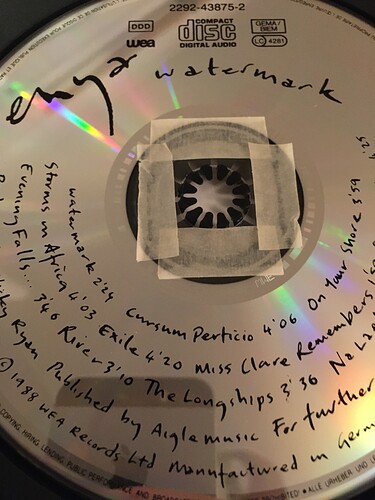 Might be worth trying this with discs that don’t sound their best - it’s one of the cheapest tweaks you’ll ever try, and it might just work.

Can I ask what would a CD5si be like in comparison to the CDI if push came to shove?

What would be as good?

I have watermark cd no issues here with CDS3

I’m very happy for you!

I was just pointing out it not the clamp at fault usually it the mechanics that’s failing. My player went in for new mech from vam 1250 to vam1202 brilliant. I might be wrong here Richard Dane might correct me but really enjoyably now after service

If you’re looking for a modern Naim CD player on a similar level to the CDI then you should be considering something like a CDX2.