There are multiple closed threads in which this cable is mentioned in passing. This is largely in the context of people saying that they currently have or currently have and are not 100% happy with. My question is slightly different.

I currently have Chord Epic from streamer to DAC and from DAC to pre. I have my cheap Vonets wireless bridge which I recently managed to finally move across the room well away from both streamer and pre with a correspondingly satisfying reduction in noise levels. That move was facilitated by an equally cheap 5m run of ethernet with an adapter at the bridge end (£28).

As ever I like to let these things settle and take my time over forming a view. After a few weeks I think I’ve gained in terms of noise floor but the 5m run itself may be a tad inferior to the hardwired few centimetres of ethernet attached to the bridge. Obviously the only difference may be that 1 is 5m and the other is 5cm. However, I think there’s room for some relatively cheap experimentation i.e. 5m of something like Chord C-Line for around £75.

Anybody using the ethernet version have thoughts on improvements or otherwise or perhaps even similar priced alternatives so I can see what, if anything, ensues?

I could of course go full Epic but my money is committed elsewhere at present and this is not life or death for me. My musical enjoyment remains extraordinarily high at present.

Do you mean C-Stream Mike?

I guessed its meant to be C-Stream, but I would not be too keen, C-Stream has had a few ‘mixed’ opinions
Have you considered Blue Jeans Cables, or one of the other forum favourites?

I’d not. What would the other forum favourites be in this price band?

I did yes. Managed to post not long after coming back from the football.

OK. In which case I rate the C-Stream and recently went ‘full-loom’ with it Router to Switch, NAS to Switch & Switch to ND555. Before I had BJC 6a for the first two and a Chord Epic for the Switch to ND555. Using all 3 C-Stream sounds better to me. 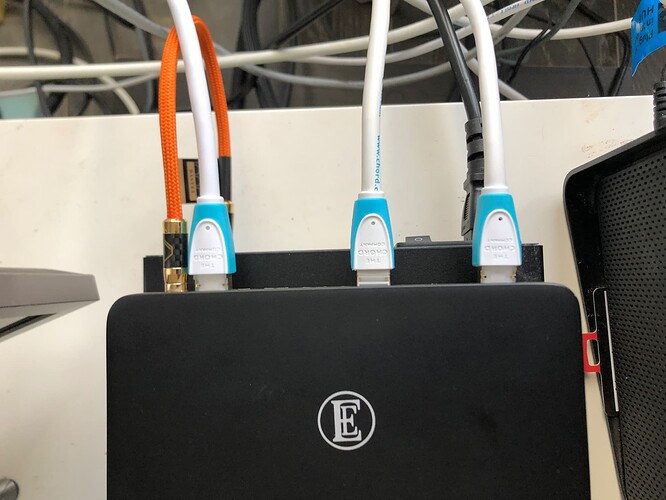 Wow, that’s quite an assertion. I have to say that at a here £75 for 5m it does seem an obvious next step.

I use C-Stream between wall ethernet socket and the Innuos PhoenixNet, happy with the results.

A forum search will show all the favourites, lots of reading & more opinions than is good for sanity.

So, exactly what I was trying to avoid then

Initially I’d like to see if there’s a no frills cheap cable which could prove to me there’s a significant improvement to be had before I disappear down the rabbit hole of things like more expensive cables and switches. Next big step will be amp. After that and maybe something like a PhoenixUSB/Net and I think I’m done.

Another C-stream devotee here. I know that it doesn’t work for everyone but the other night I tried my Catsnake cable again. I can here the strengths of Catsnake but it just sounds noisy to me. It puts me on edge when I listen to the high frequencies. This is the exact opposite of the C-stream, which I find beautifully etched and balanced. Much more musically satisfying. I think it may have something to do with the screen or grounding approach used?

Mostly CatSnake 6a (floating shield) here, with the odd length of AQ Cinnamon.

Sounds great to these ears, and modestly priced.

Okay, I think this thread is already telling me that £75 is at minimum going to give me something with which I can draw a clear comparison with the cheap thing currently in place. Time to spend some money.

The connectors on one of mu c-stream has broken -the locking tab is very flimsy and snaps easily so it just sites in the socket and has fallen out on occasion, whereas the connectors on my desiganacable catsnake are much more sturdy.

A floating shield is acting like an antenna that will resonate at a frequency that is dictated by its length and geometry of wire which will be transferred to the signal.

Alternative is using floating shield and a ground box.

Does that mean I need a bucket full of soil for my system to sound any good?

You need to read bit more about ground boxes, metals and chemistry. It’s not a box with carrots you know.

Looks like a phishing email to me but with worse grammar and spelling!
Has a sort of bovine smell…

I’m struggling to think why I’d ever move it so much it would stress or break. Once it’s in it’ll be in for a good while unless it’s noticeably worse than the current £28 thing.

to be fair i was re jigging the rats nests of cables behind the tv and it got caught slightly but snapped so easily.