I can add that my house and all houses built up to 1994 in Sweden have non grounded outlets in all rooms except bathroom and kitchen. Not sure how that is in UK. But as always it’s the customer doing wrong when using Naim even though it’s only with Naim I’ve had buzzing transformers, ground loop issues etc. Strange.

I think Sweden and Japan are alone in the world for non grounded outlets.

Naim stuff must be mains earthed or not used.

On my SN2 with the original Hugo in some configurations there was a buzz. If I remember rightly I took a weird from the ground screw to the outside of one of the din plugs and it was resolved. No issues with 282 and any of my hugos

Our apartment in France was the same, presumably to save money when it was built in the 70s, there was even an earth cable passing behind some of the unearthed sockets in the living room. This is one area that could usefully be harmonised in Europe and probably has been by now even if the socket format hasn’t. At least appliances that require an earth would be safe to use anywhere within the single market.

Well it couldn’t be more different in the UK. You would unlikely have liability insurance and be, almost certainly, in breach of health and safety regulations if you were to use a non earthed mains setup in a professional setting with equipment designed to be earthed… also you would not be able to get the work certified.
Many professional studios and such like will use a TT earth system with local electrode to help reduce the noise floor.
In most domestic settings in the UK, PME (TN variant) solutions are used instead… its can allow more consistent earth leakage safety but at the expense of increased noise on the earth… that most don’t care about, and if it is important you have the option often of TT.

This does seem rather peculiar.
If an appliance is double insulated and therefore doesn’t need a safety earth nor has an earth wire in its cable then the presence of an earth pin in the socket will make no difference, whereas, for an appliance where the case is designed to be earthed for safety, it is important that it is.

Assuming whole EU except UK has it like this? Maybe Naim is not allowed selling outside UK then

This in Finland but similar in whole EU I believe. 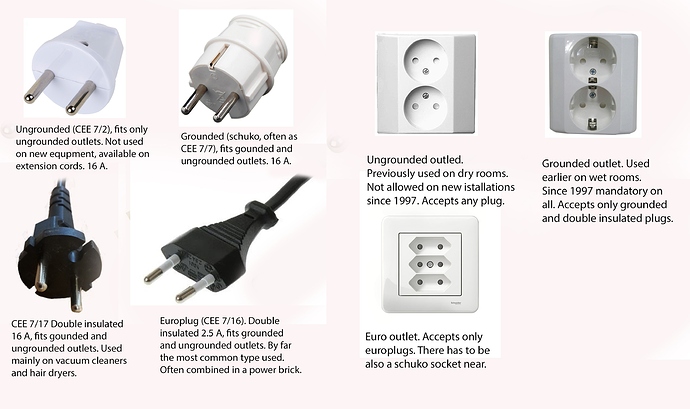 You will find UK electrical wiring safety standards and legal requirements along with other EU countries are aligned with international standard IEC 60364 and the European CENELEC harmonisation documents.

There are apparently some local exceptions… I have no idea whether Sweden has compliance exceptions outside IEC 60364… though your description suggests they do, albeit as described could lead to some very un safe environments.
Unlike in the UK I have no Swedish chartered electricians to confer on this.

@Slamdam,…Hi,.in what part of Sweden do you live.?

I live in northern Sweden…Boden-Luleå area.

Thank you for all of the replies. Although it wasn’t the issue, the suggestion to add a second input to the preamp may have helped me isolate the problem.

The hum only exists when connecting the Chord GEM to the 152 XS with and a pair of Kimber Kable Hero RCA’s with WBT-0114 connectors.

Also, if I use the same Kimber Kable RCA’s and a Denon HEOS link streamer I do not get a hum.

I’m not sure why the Kimber Kable/WBT-0114 RCA’s combined with the Chord GEM are causing the hum.

They are fairly pricy RCA’s cables. Perhaps the WBT connectors aren’t compatible or maybe the Kimber RCA’s are revealing a hum that exists but cannot be heard with the cheap cables?

Anyone else have Chord/RCA connector problems or other ideas?

I’m not sure why the Kimber Kable/WBT-0114 RCA’s combined with the Chord GEM are causing the hum.

On my Hugo, I found it quite difficult to get those spring loaded contacts to grip properly on the socket, so if your DAC is the same, are you sure you have a good contact on the ground connection? That’s a bit of a shot in the dark, but maybe worth checking.

Well a grounded outlet is more safe but if that statement would be true homes in Sweden and japan would be empty of electrical equipment which is not the case.

Well not exactly. Earth serves a couple purposes and only when one of them is safety and the unit has a “This appliance must be earthed.” statement on the back must you do it. In Japan, unless it is a washing machine or fridge or something similar, appliances that use earth for any type of signal drain come with either a 3-2 adapter or the earth is a trailing lead off the mains plug.

In the case of Naim, it must be earthed and I paid a sparky to ensure I had earthed sockets installed. I’ll be moving to a rental accommodation for a year or two while we build a house and the Naim system will all go into storage. Several reasons for that, but one is simply there will be no mains earth and Naim requires this. I just don’t see the point in even bothering to set it up without proper earth. I’d rather buy a another hifi for 2 years that doesn’t require mains earth (so most Japanese gear) and crack out the Naim when it is in an environment to flourish.

I find that static buildup on computer systems that are not earthed is a major reliability issue. I have a 21U rack at home for work. In the previous apartment (no earth) random hangs of devices (not just computer but network appliances) was fairly frequent. Although I cannot prove that earth is the key, that is the only variable that has changed and in the current place, there are no mysterious untraceable device lockups.

Chord Qutest to SN2 via Audience Interconnect., zero noise, none nada. Could it be quality power cords, or power line conditioner, maybe.

For me the problem of hum only occurred when Hugo was the only single component connected to the SN2 RCA inputs. I seem to remember, but my memory could be failing me, that if I connected using RCA to DIN then the hum went away.

What was the problem here, if I may ask out of curiousity? And would earthing – either from the SN or Hugo (e.g. 3.5mm input) – have solved the problem?

@anon16407563 I have just the one pair of interconnect. The OP mentions using Kimber , last I checked they are Not Shielded, could certainly cause hum

A shielded cable (interconnect or speaker) is only useful if the shield is earthed at one end on the drain.

Some common the shield to the return at one end which is fine if the return is earthed at that end (usually the amp). What you absolutely do not want to end up with is a shielded cable where the shield is not drained at any end. The shield saturates, capacitance goes up and sound quality like suffers greatly.

Could that be related to why some people swear on that a restart of Naim equipment make them sound better?