Have been using this interconnect between cds2 and 52 for 1 week. It replaces standard lavender cable. No question it let’s in more information with more high frequency and more detail. Bass less muddy.
However, it can sound harsh or at times the details can take away from the coherence.
I’ve put about 20 hours on the cable.
Chord company states break in takes 100 hours. Does anyone care to share their experience with cable burn in, especially with chord Sarum
David

It takes a looooooong time, in my experience, perhaps a little less in T guise, but still a good few ‘00 hours. At 20 hours, you’re nowhere near - just enjoy the trip.

Music took the least time, upgraded Sarum to Sarum T still required weeks to show their best, but “old” Sarum i/cs and speaker cables took around 600 hours and had another step change at 1000.

I have built quite a lot of cables, including some very high quality specialist ones - I have never once heard any one of them burn-in. Swapping an already extensively used cable for a newly constructed one (with the same construction and materials) reveals no significant changes in the sound between them.

I have however frequently noticed that, over a period of a few weeks, I become more accustomed to the changes in the sound of the system and, as a result, I have learnt to pick up additional details and also as I become more familiar with the changed sound I interpret it as being more natural.

What were the changes that u noticed?
How confident are u that the change were u adjusting to the different sound rather than the cable actually burning in?

The changes, for me, are pretty profound; a pronounced top end becomes mellifluous and detailed, an exuberant bass becomes tight and tuneful and the soundstage opens up - in the case of Music, quite considerably. What doesn’t change is the timing.

Perhaps the changes wouldn’t be so noticeable on a less revealing system, which shouldn’t be an issue for you?

Thanks for the input. This seems to be a controversial topic.
I’ve never been a cable swapper- took a chance and ordered the Sarum T based on recommendations from people that I trust.
I will keep at it and see what develops. There is a lot of potential for bias and expectations to play a role.
David

Hi David, given that this is your first exposure to Sarum T in what is a traditional Naim system - 52/135, right? - there will also be an element of acclimatisation. The cable is quite different in character to what you’ve been used to with the Lavender so you will be getting used to that, too, quite apart from the burn in issues.

When I had my 52, I had been using a Hiline and replaced this with a used Chord Solstice, the previous name for Sarum, and what struck me most was the sense of emotion the Chord cable conveyed. The HiLine was “flat” in comparison.

I’ve never been a cable swapper- took a chance and ordered the Sarum T based on recommendations from people that I trust.

I was a committed Naim cabler for decades. Tried others, which all just sounded like tone controls without the PRaT and musicality.

Then I heard a set of run-in Sarum speaker cables and my view of what was what changed irrevocably - I just didn’t want the music to stop. My own Sarum cables took forever to break in - up and down and if I hadn’t heard run-in versions I would have had serious doubts (especially at the price). But they came good.

I now run a complete set of Sarum T (plus the Music streaming cable) but in all honestly can’t comment on run-in of any specific element, as I changed so much at once. All I can add is that the system sounds “here” and “real” and inherently musical (I can’t adequately do Hi-Fi speak).

What I notice with the Sarum T-
High frequencies are more prominent, less prominent bass ( though bass very tight and crisp), quieter background, easier to discern individual instruments.
At times sounds too clean compared to the lavender. It may be that I need to acclimate to this new sound. At times it sounded less full bodied compared to lavender- then last night put on Ryan Adams Gold and it was a “wow” moment! So maybe will need to have more hours.
Note tried this cable on my 01 and found same issues as seen with cds 2
Thanks for all the input (pun)
David

My experience has been cables take 100+ hours to burn-in. Out of the box they sound cold and edgy. Couple of things to consider:

The Sarum T is a higher resolution cable than the Lavender. It will reveal issues with the rest of your setup. It’s always good to inspect and review your build. I try to keep all my cables from touching each other. It’s a great cable, once broken-in it will sound outstanding.

Locking collars undone and Sarum T has about 30 hrs on it.
I must say system starting to sound better- more musical , less sterile.
Early on the sound reminded me of a tv picture analogy- did u ever set the tv pic so that it looks like a soap opera, where it looks like a video rather than a warm, colorful movie? That is how it sounded a couple of days ago. More detail but lacked warmth. Now it is really better and I am hoping that this trend will continue.
More detail for sure. Want the music to wake up and sense the performers are in a groove. I think it is happening

I have chord sarum t rca to din and din to din and neither have any locking rings?great interconnects by the way

Newer ones have locking rings

Chord recognizes at least 100 good burn in hours. I have the Sarum T speakers bridges, and the same impressions at the beginning. From 100 hours, that light harshness gradually disappears and the low frequencies magically begin to appear balancing the sound.

Newer ones have locking rings

That’s a backwards step, when i upgraded my Sarum Super Aray to Sarum T, i marvelled at the omission of those collars, seems so much neater and easier to connect without them pointlessly flopping about in the way…

Knowing the Chord Company they give an option to have them or not (?)

What colour are your new Sarum T cables? 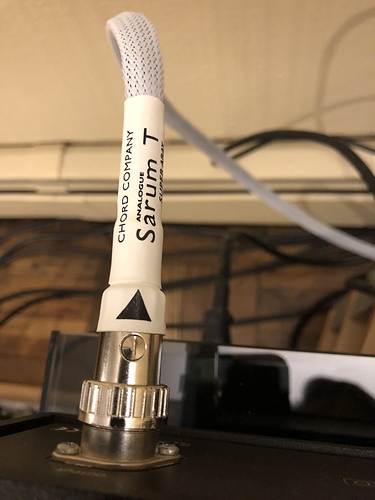 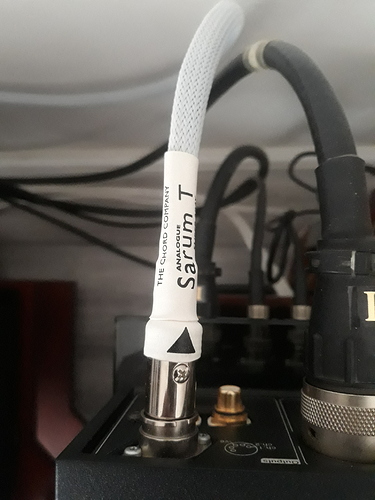 These appear to be newer than David’s. The locking collar was replaced by these a while ago.

Ears and brain burn in. Not cables. They just say that to have you spending more hours to get used to the harsh sound. Silver plated or?