Hi community
I have IFI PRO IDSD DAC connected by Tellurium Q Ultra Black RCA-RCA to my Supernait 3. Sound quality is superb but I would like to upgrade it.
Should I replace it by RCA-DIN cable?
If yes then what is better - Chord Signature or Naim Hi-Line ?
Any has tried these cables and can recommend?
Thanks a lot
Haim

There is no better. There is what you prefer. If you already prefer the Tellurium you’re likely to prefer the Chord but your mileage may vary. The HL is a fragile beast and the debate continues as to whether it adds or subtracts to achieve its end result.

The previous owner of the TQ Black interconnect that I use between my streamer and SN3 preferred it to the Hiline. Perhaps it’s best to stick with what you’ve got and buy some more music.

In my experience I find the Tellurium Black Ultra interconnects a little lacking with Naim, but appear to work well with Chord (Electronics) amplification for example.
I find the Hiline really matches Naim well, hardly surprisingly, and matches the Naim sonic signature, especially with the 552.
This sonic signature is a slightly forward upper mid that gives Naim that distinctive engaging sound.

But as said in the posts above, this is very much down to personal preference… they are all excellent interconnects, but each has its own way of interacting with the connected circuitry to suit your environment.

The hiline can and does sound nice on the naim kit, but so do others.
But having had a few over the years, I am sorry to say I wouldn’t have one these days, due to the way they can just fall apart, for no apparent reason, all of mine went back and one of them twice, it was at this point I sold them both and moved on.
Don’t know why they just fail, but if you tend to play around with your gear, as in dress cables now and again or box swap, then I would look elsewhere and save yourself the hassle in sending it back when it fails.
Might sound harsh me saying this, but plenty of others will have done the same

I’ve had my HiLine since 2015 and indeed it has been sent off for repairs, three times in-fact. None of which have been a self-destruction, come on it’s not that weak, but rather playing around with it too much, swapping kit around etc… Do i regret purchasing and keeping with it all this time? Er…no, not at all. Indeed the last time it came back from it’s third and probably final repair, as i now fully understand it’s fragility and quirkiness, it sounds totally amazing. Like miles better than it ever did before. I don’t know what witch craft Naim have sprinkled on it, on it’s last outing, but it’s going nowhere. Kaput. I tell you, for those that are willing to stick with this quite remarkable interconnect cable, you will be rewarded, big time!

Each time it was sent off for repair, i put the lavender in for each period, and liked it, got used to it, but on the return of the Hi-Line, each time, i could instantly hear which is the far superior cable. The lavender cable in my system sounds thin and reedy and hollow by comparison, although the lavender is still very good as it’s always been, just not as easy flowing, inviting, silky smooth or anywhere near as meaty as the HiLine. In a nut shell the Hi-Line simply lets through more music but in a more rather mature way…hard for me to put into words.

P.S. Good on Naim for sticking with it because i get it, i really do.

Here she is in action folks, as strong as an ox! 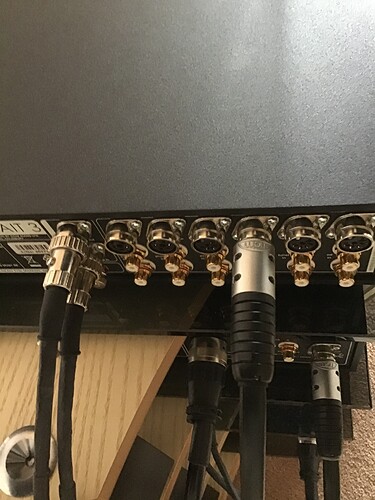 The problem for me is that I do not live in the UK. So it is not that easy or possible to send the Hi Line for repair…
If this cable is that fragile then I would better buy the Chord Signature …

I have several hi lines… they are not fragile… but they can’t be abused… so I wouldn’t use them in pro setup where they are constantly being unplugged and plugged… and cables stretched etc … but in a domestic Hi-Fi setup, with say replugging every month or so they are absolutely fine.

Bizarre, they broke on their own with no interaction or human contact, I think you must have been very unlucky. I have had mine for many years, and I only snapped one collar once when I was being silly and moving components with cables still connected, and a component slipped and put all its weight on the hiline… despite this obvious human error Naim still repaired foc.

I’ve had 2 dealers in the past 30 years. They both reckoned that Hi-Line breaks were far more common than box issues. Changed slightly with streaming. Most common issue is that the simple strain of being used on a source near the top of a stack strains it to breaking point. Naim recognise the design flaw and this replace free of charge. So no, I plugged it in and left it until it broke… twice.

I must have had later improved versions with any design flaw removed… as mine have been hanging cables in free space for proper cable dressing and no issue at all for 3 or 4 years in situ… and the collars look the same now as they did when new.

Been lucky simon as i dont think the design has changed over the years.
But i do feel just the weight of the cable can make it break, maybe if its supported more equal on both connections, rather than one taking more the weight, due to box placement helps.

Yes. Later ones are better.

I’ve never had one that breaks on it’s own accord. Twice was a earthing wire that where it broke it’s connection (loud buzzing noise). Once where a plastic ring broke, but this was because the damn thing slipped out of my hand whilst unplugging and it hit the deck. One must learn to keep hold of the connector at all times and only by it’s metal body. You live and learn these things.

Great thing is Naim have never charged me for any repair thus far. Now I’ve got to know it’s quirks i doubt it will ever go back again. Some say that it explodes into a cloud of dust if one would ever dare to look at it, not true i know, but you get my gist. Finally as for sound quality it sounds quite a bit better than the lavender stock cable could ever achieve. It’s like the tap has been opened up more where instead being squeezed and spraying out all over the place, there is now more mid-range, a calmer steadier thicker flow, less noise, and the dynamics also go onto another level.

I’m unaware of any design change. Think it works okay on Fraim but we don’t all have Fraim.

Can’t remember the last time a time on here saud Naim charged them for a repair. Mostly they just exchange for nothing.

It says a lot that Naim still make the Hi-Line. They could’ve chosen to ditch it along time ago. Naim must still feel that the Hi-Line plays a very important role in their range of products. Why would they supply it with their top sources, when one could just move onto other optional makes or their own SuperLumina instead? Despite it’s quirkiness and repair jobs they’ve stuck with it all this time. Why would they choose to do that? It’s been unfairly dismissed by the wider audience i feel…

Or maybe just get TQ Ultra Black in RCA to DIN which will improve the sound you already like.

Can’t remember the last time a time on here saud Naim charged them for a repair. Mostly they just exchange for nothing.

Do you believe exchange new for old? …rather than repair existing?