Cometh the summer time and I recall my love for the cider. How about you? I really do love a nice dryish English (and even French) cider, and would love to sport a local “real” cider - these are, however, a bit hard to find here between Sweden and Russia. So, it would be nice to see and hear about the ciders you are enjoying. 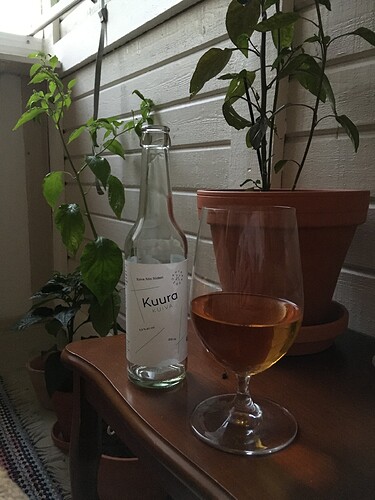 This one is from Southern Finland and has a really nice ripe, even a bit boozy, aroma. Perfect for a 30 °C Friday evening. So, the question is, what are you having? 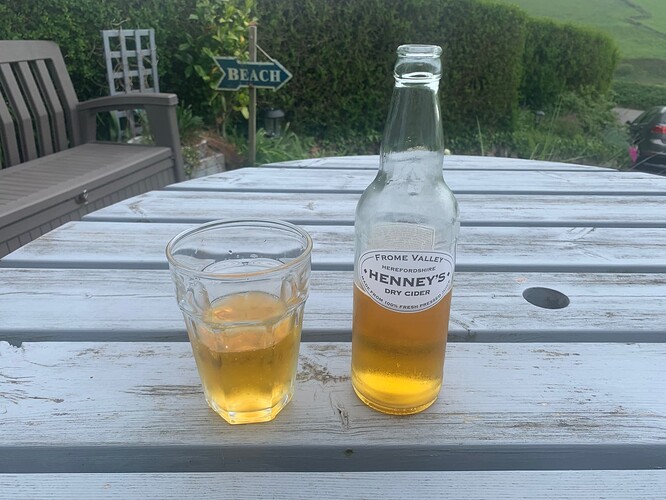 My absolute favourite cider - Henney’s dry cider made in Herefordshire

I’m with CD for the Henney’s. Bear in mind that I live in Devon. As a lad, if we helped a farmer with haymaking, there was a presumption that he would provide cider made on the farm to slake our thirst. So much of modern cider is too sweet, too gassy and often mixed with flavouring. The Henneys has an authentic taste that is close to scrumpy. It is just a bit more civilised.
A couple of stories. A mate of mine lived on a farm and his father and uncle were making cider. They had filled a hogshead wooden barrel with the new brew and put a cloth over the top to keep out debris/insects etc until the wooden top went on. One of our mates was on the walkway beside the barrel and thinking the top was already fitted, pushed down with his hands to sit on top. He went straight down inside, bum first and we had great difficulty getting him out again.
Another time, we wanted some cider for a party and went to a farm out in the country armed with a suitable jug. The farmer held the jug under the tap and turned it on but nothing came out. “Just a shrimp” he said and pushed a rusty nail up the tap. Out came the liquid and, needless to say, it went down really well.

As a student in Exeter years ago, I got into the ciders and away from beer. I remember it being cheaper at the pumps back then, but you could go for broke and buy a gallon of scrumpy for a pound. I’m sure the price has gone up since. I barely drink these days but will check out the recommendation from CD.

There is great cider west of Hereford: anything it is not sweet or overly fizzy may be worth investigating. This won’t be news.

There is great cider in Ireland and bits of France - also not news, they have apples and Celts live there too.

Slightly surprising location? Asturias, northern Spain. There’s a bunch of Celts there too, though many Brits don’t know it, and the similarities to parts of Ireland, Cornwall and Brittany is pretty clear. That includes making cider - still, opaque, strong and really good. They also cook sausages in it, good food for walking up a mountain.

Also, they grow a lot of apples in Tasmania. The UK joining the EU nearly destroyed the industry but they have rebuilt since. In the meantime, cide

Apologies for the truncation!

That last bit should have said that cider was the result - good cider in Tas!

There is great cider west of Hereford.

I had a trip around various orchards back in the 1980’s. Charming people, great cider and top company (sadly, she was one of the ones that got away).

One of those moved eastwards to Cheltenham: Single Varieties – Dunkertons Cider
Sadly it gone very commercial but has the benefits of a state of the art system. Some of their single variety ciders are stunning.

I somehow bought a bottle of German pear cider a few weeks ago and I tried it at the weekend. It was just like drinking those sweets from my childhood (“pear drops”) and I had two or three mouthfuls trying to tell myself it was ok, but then I noticed that my right hand had just inverted the bottle over the sink, so I thought it only polite to let my left hand empty the glass down the sink too. 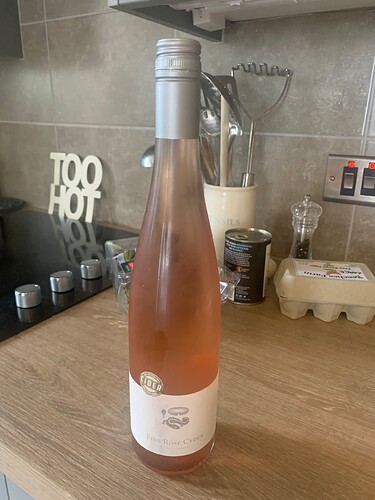 Interesting one this and drinking it as I post - a gift from a friend. Calls itself ‘Fine Rose Cyder’. Made by The Newt in Somerset and comes in at a whopping 7.5 % ABV. It is VERY dry and in fact is so dry I’m not sure that I like it (but will have to finish the 750 ml bottle to be sure

There is great cider west of Hereford.

I had a trip around various orchards back in the 1980’s. Charming people, great cider and top company (sadly, she was one of the ones that got away).

One of those moved eastwards to Cheltenham: Single Varieties – Dunkertons Cider
Sadly it gone very commercial but has the benefits of a state of the art system. Some of their single variety ciders are stunning.

Had this on Saturday , along with a nice pork chop and followed by a glass of Calvados

Bulmers , Strongbow etc seem to have seen their market share reduced and I have a box of Dunkertoon single apple and organic perry lurking upstairs to be consumed during the Christmas period .

I would also recommend the Somerset Cider Brandy Company , especially for their cider brandies

Got a mixed box of that for Christmas as well…

The union bar where I was a student used to get Westerns cider in a plastic barrel (not Old Rosy) and it was kept on the shelf behind the bar. On arrival it was clear but bland but after a day it went cloudy and acquired some flavour. If there was still something in it after a week it turned pink, then watch out.

That brings back memories. When I was at Exeter, we used to go out to a farm, near Crediton IIRC, and buy cider straight from the barrel into half gallon plastic containers. There was a sweet (revolting) and a dry (like drinking sandpaper) - mixing the two resulted in something that was very nearly drinkable. But it was very cheap and had a very high alcohol content - a student’s dream. Can’t recall the price now but it would have been less than 10p a pint. Hate to think what went into it apart from apples. Happy days. Strangely it never put me off my enjoyment of cider.

On Christmas Day , I sometimes use cider and apples as the basis of food and drink.

Always have free range pork (you can taste the difference) with home made Apple Sauce , the home made Christmas pudding (made by me) uses cider or sometimes calvados . One year I think I did celery and apple soup as a starter

For alcoholic starters there is this 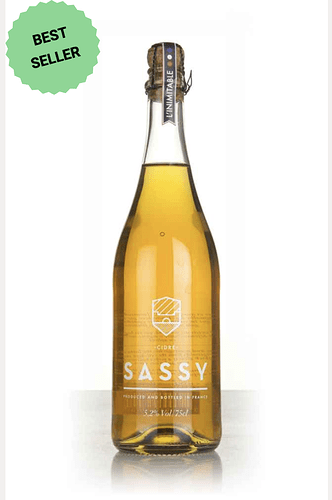 A glass of Dunkertons to go with the meal

And then maybe a glass of Somerset Cider Brandy to finish.

The thing is that the idea of cider as a cheap student , or a cheap mass market product is firmly in the past , we are making fine cider brandies and as long as we don’t call them Calvados nobody is worried - except the Scotch Whisky Industry (for some bizarre reason)

On one of the most thirstiest day ever… 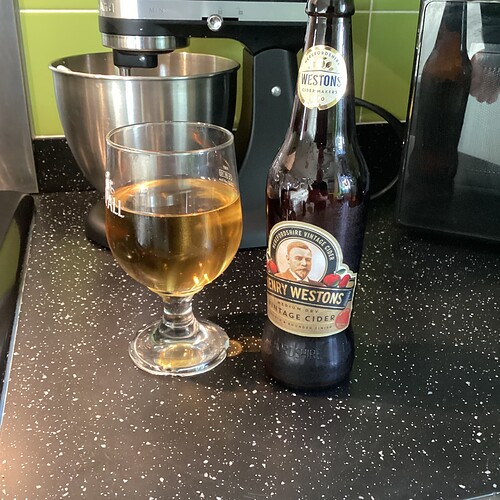 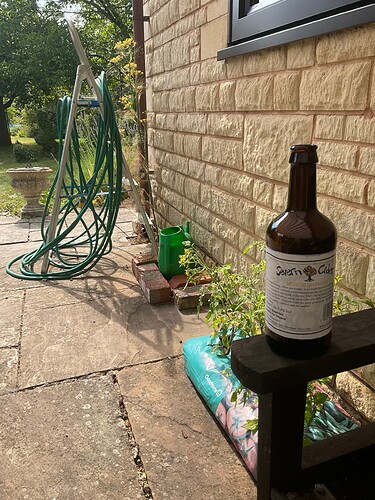 image1920×2560 835 KB
Severn Cider from Awre near Newnham on the other side of the river from us bought from Highfield Garden Centre. This one a medium sparkling chilled in the fridge and only briefly taken outside for the photo. My weather station says 38C so no point letting it warm too much. The awning keeps the lounge cooler at 24C! I do like the heat though but 38C is a bit too high.

My grandmother’s uncles had a cider orchard, presses and wooden vats as part of a dairy/ beef farm. My father used to says the rats would get in and presumably died happily! One has to bear in mind that traditional methods use ripe fruit that has fallen from the trees and acquired lots of natural yeasts. Lots of natural stuff goes into the press and is partly filtered. Wouldn’t pass today’s hygiene police! Other cousins to my grandfather ran Bulmers in Herefordshire a 100 years ago. At Oxford Uni a friend used to buy a gallon or two of Gaymers which we drank over the course of a month. Without refrigeration it would get drier as we reached the bottom of the plastic barrel at the end of the month. The main thing to avoid with a natural product is it turning into vinegar, the solution being regular tastings particularly in hot weather! Cider still my preferred long drink.

PS In my youth Weston were the choice for their Perry (made from pears) and Bulmers for Cider (Apples). They were bough in quart bottles with screw caps. These were returned for reuse.

And never get off the chair for the rest of the day!

I’d given up on cider , thinking of in terms of Woodpecker . I hadn’t touched it in years , then somebody gave me some Weston’s Perry, which I scrupulously avoided until a hot day (not unlike today) , it was seriously good.

These days for me it’s mainly Dunkertons, Somerset Cider Brandy, Aspalls and Westons. Though Waitrose do some fine ciders

Showerings had a Cider Mill at Shelton Mallet once upon a time. A few years ago driving through I heard the pressed juice got sent in tankers to Ireland to make Magner’s Cider.

Showerings were of course better known for Baby Cham! Really should make the cider here now we our out of the EU. No doubt the phytosanitarity rules ensure everything is sterile now.

Well Perry is still made in this country , rather fond of it.

I follow it with a Poire Eau De Vie ,